Housemarque does again what they do best: a must for fans that love the arcade type of games with outstanding cooperative action.

Housemarque has built a reputation in the very enviable arcade genre. In today’s market, it is extremely tough for companies to sell games if there is no great story behind it, which requires a higher budget. However, due to digital distribution, this type of competition allows us to purchase digital distribution, which is much easier to acquire for a more reasonable price. The developer Finnish has had previous success with games like Super Stardust HD, Dead Nation, Resogun and we even like to add Outland to this list, which is the least known, but extremely well done.


Housemarque launched Alienation for the PlayStation 4, which in a way reminded us of Dead Nation with aliens, but not entirely. It involves cooperative action with similar controls, a top view and dozens of enemies visible on the screen that you have to fight off. However, it has a bit of a different feel and twist to it.

Alienation’s concept is similar, but instead of zombies, you fight aliens. It has more options to be customized without actually losing what is crucial in an arcade game, the fast paced intensity that is required in a frantic shooter game. The story is about an alien invasion and the resistance of the human race to fight extinction

Initially, you will have the option to choose one of three classes with different skills. Each character has its campaign, which means that once chosen one must continue with this character throughout the entire game. This means that you have to complete the game three times to experience all available characters. 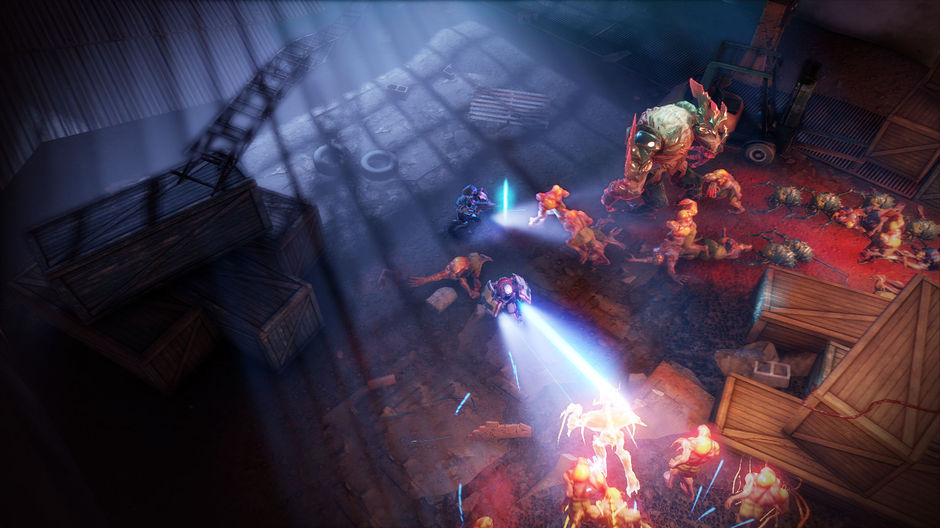 The bio specialist, for example, is a supporting character that has healing power, but it can be quite lethal as well: you can create toxic clouds or launch a swarm of nanomachines seeking for enemies. The typical tank class is the most prepared for combat, perfect to lead the exploration; you can wave impact and a ray of energy and is placed on the front line when the situation gets dangerous. He can activate a shield to protect the other characters. The saboteur is defined by Housemarque as the ninja, with advantages in close combat sword – a plasma- body, which can call air support and use camouflage to determine the alien’s position. This will enable you to reach a checkpoint without risk.