Luigi returns to ghostbusting for the third time in one of the best and funniest adventure of this year.

After playing the first two titles, we never doubt that Luigi’s Mansion 3 would be a great game, although we did not expect that it would bring so much quality to become the best titles on Switch in such a short time. The Switch has already built a library of masterpieces and top-notch releases. This may sound exaggerated, but after digging every corner of this adventure, we have no choice but to confirm the obvious: we are facing a must-have title for Nintendo Switch.

This time the story is about how Mario, Luigi, Peach and several Toad are invited to a luxury hotel to spend a pleasant and well-deserved vacation. However, plans do not go as expected when, on the first night, they discover that the hotel is haunted and run by ghosts, they have lured our heroes so that King Boo can take his long-awaited revenge by locking them all in spectral pictures.

Luckily, Luigi manages to survive the ambush, becoming the last hope of his brother and his friends when embarking on a rescue mission. During this journey, he will be assisted by the extravagant Professor Fesor and the new and improved Poltergust G-00, a Multi-purpose vacuum cleaner with the ability to trap spirits. So, we must explore every floor of the hotel while we face spooky ghosts, solve an infinite number of elaborate puzzles and amass a fortune by collecting the treasures we find.

Who you gonna call?

As you can see, the story is a simple excuse to justify the misadventures of our fearful protagonist in a game that closely follows the footsteps of his predecessors. Thanks to the developers, they added new mechanics to make it feel like something fresh and novel.

Most importantly, the new Luigi Poltergust G-00, equipped with more tools and functions than ever. The strobe returns to illuminate our path and stun ghosts with a flash of light and the dark-light, a special flashlight with the power to reveal invisible objects.

We also have physical attacks. The first of these is the slam , an attack movement with which we can stamp any spirit against the ground to do them a lot of damage and even use them as a weapon to hit other enemies, thus becoming one of our most useful and essential techniques, since it will allow us to quickly end our rivals and easily confront very large groups of enemies.

On the other hand, we also have the suction shot, a device with which we can throw a plunge, and it stuck against various surfaces. Then we can suck the rope and slam the object. This helps you to open some doors, destroy objects and even break the enemies with shields. Lastly, the jet-propulsion, with which we can rise slightly in the air by launching a strong wind discharge against the ground to interact with several items and avoid ground attacks.

And it is time to introduce the most important addition;

Gomiluigi, a second character with the same appearance but green and gooey. He has the same abilities, although thanks to his gooey form, he can pass through metal bars(reminds us T-1000 from Terminator 2), enter narrow places, walk on Skewers and circumvent certain traps. Any weaknesses? Water and low life bar. Luckily, we can summon him again whenever we want, even right after if he gets defeated. 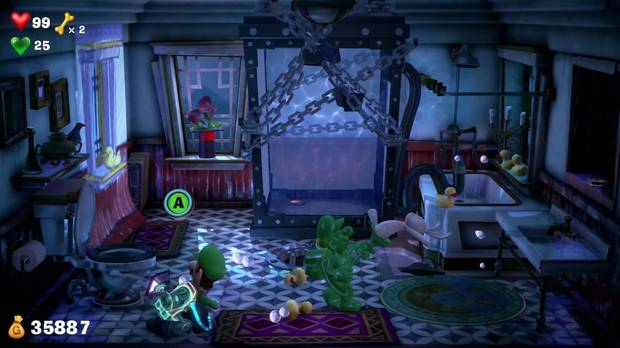 The most interesting thing is that there are also cooperative moments that both Luigi and his doppelganger can carry out, a feature that Next Level Games has been able to take advantage of by designing some great puzzles that will force us to switch between characters. This also opens the possibility of playing with a friend locally, in our opinion, the best way to enjoy the game. After all, two heads think better than one and collaborate with a company to find secrets, solve puzzles and defeat ghosts is a fun and rewarding experience.

Every floor of this hotel is an adventure

Luigi’s Mansion 3 allows us to explore the hotel at our pace and with total freedom. To move between the different floors of this building we must use the main elevator, although our enemies have stolen the buttons of the elevator,  we must recover them in order to access each floor. Our goal at each level will be to hunt down the ghost that has the elevator button that gives access to the next floor, something that is much easier said than done. 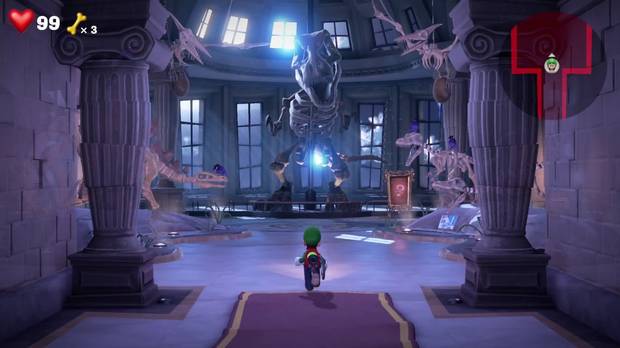 The best of all is that each floor has its own theme,  you can experience very different and unique adventures in each of them. The campaign has a gigantic 15 hours gameplay. We are talking about a game that never ceases to surprise us from start to finish and that never runs out of ideas when it comes to raising new challenges and unexpected situations. On one floor you will be exploring an Egyptian pyramid full of traps and on another, you will be helping a film director to shoot his next movie.

If this was not enough, the puzzles that you will find in each room are the best we have seen in years, forcing us to think hard and look at even the smallest details to solve them. Also, they combine so well with the fighting, you will never get bored since we will always have something to do.

Especially when looking for secrets, since many of them are hidden in such twisted and original ways, you will find yourself in despair while searching for them and interact with everything on the level. You can buy clues to indicate their location, although we recommend that you do not resort to them unless you reach the limit of your sanity. 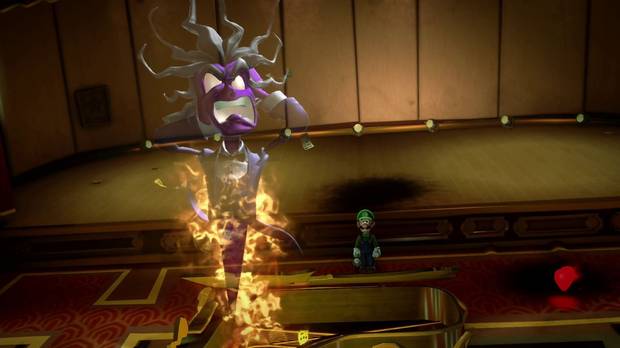 With regard to the fighting, we have to confess that we have missed a greater variety of enemies since there are not too many types of ghosts and we will quickly get used to their patterns. In fact, these confrontations are not particularly difficult and they end up becoming a mere process, assuming one of the weakest parts of the adventure.

Of course, bosses are the opposite: numerous, varied and tremendously elaborate. It is noted that in Next Level Games listened to the criticisms that these battles received in Luigi’s Mansion 2 and they have given everything to do this right, and they achieved their goal. In order to avoid spoilers, we will only tell you that the vast majority has multiple phases and sensational puzzle design, you will need to find a way to stun them and then vacuum them. These are among the best bosses Nintendo has ever done. 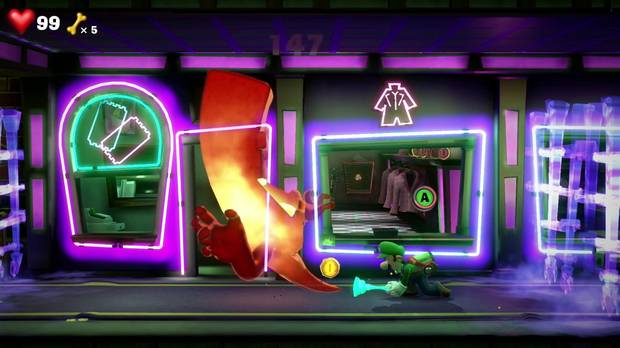 In total, completing the game at 100% is a task that will take between 20 and 25 hours, although this figure can be raised considerably if you want to unlock all the achievements. In short, a  respectable duration and very suitable for this type of game.

Other than the campaign mode, there are several multiplayer modes, the Scarescaper being the most interesting. In which, we can cooperate online with other gamers to overcome several floors against the clock while we fulfill the objectives, such as finding a certain number of Toad, collecting a specific amount of money or defeating several ghosts. 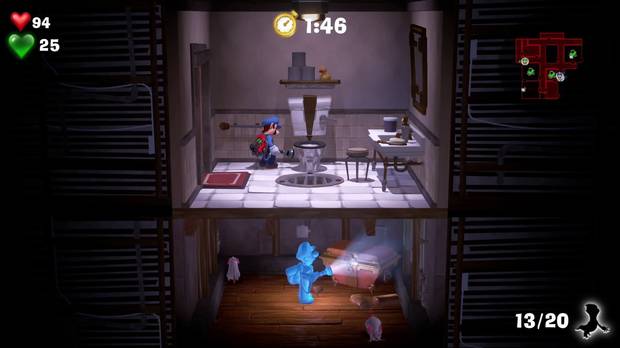 As expected, the design of the floors will change in each game and in them, we will find innumerable traps and dangers that we must avoid, or we will be trapped until one of our teammates comes to save us. In addition, during the gameplay everything can happen, such as the  Poltergust G-00  being stolen or the light goes out. Scarescaper seemed very entertaining and challenging that requires a lot of cooperation, since you’re racing against the clock. 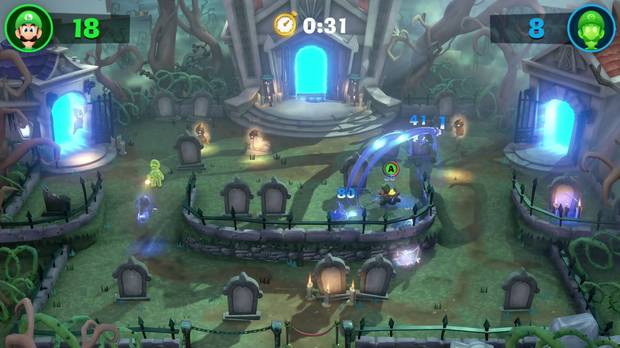 On the other hand, we also have a competitive multiplayer mode for up to eight players that can only be played locally. Screapark has mini-games and there are currently three different ones, where two teams must fight each other to get the highest score, either by collecting coins, defeating ghosts or destroying objects with a cannon. They do not go beyond being a simple so if this local wasn’t included it wouldn’t be a big loss.

We cannot conclude our review without praising its overwhelming audiovisual section, where it is clear that the production values ​​are top-notch for one of the most important title released on Nintendo Switch. Moreover, we dare to say that it has the best graphics ever made by Nintendo, delighting us with a technical marvel that will make you rethink the limits of Switch.

The modelling is sensational and very detailed, the lighting is a real beauty, the effects are incredible, the scenarios have a level of detail and care that the artistic design could not be more exquisite. The animations are at the level of the best-animated films, not to mention how hilarious and funny they are. 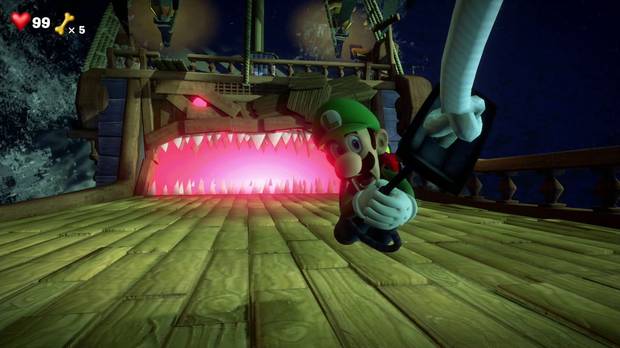 All this is accompanied by a beautifully composed soundtrack, adapting to each situation and the theme of each floor, but without losing that gloomy and sinister touch at all times. The sound effects are not far behind, it all takes place in the Mario universe where simple sounds and short expressions are golden.

Luigi’s Mansion 3 is a real work of art. A very varied, surprising, ingenious adventure, with a lot of personality and fun. You will be hooked from beginning to the end, even after you finish the story you will be coming back fro the collectibles and then for the coop multiplayer, only a game at this quality can offer so much fun. Undoubtedly, Luigi’s Mansion 3 is a must-have title for any Switch player, the title deserves every penny and more.

We have prepared this review with a download code provided by Nintendo.