Nintendo playable again demonstrates its excellence with which probably is the best delivery of a legendary saga. A wildly fun game to be glued to the TV alone or in the company for tens of hours.

Passing through a blue bands our vehicle turns and off the ground, and this allows us to run through walls and ceilings, something visually spectacular but playable somewhat anecdotal, were it not for the clashes with sprint , a little boost we received the hit our opponents when we drive this way. There are also certain items that drive us to touch them, and we must change the chip every time we walked in antigravity mode because the rules change and clashes with rivals are not penalized. Combined with the flight times, the water sections and many jumps -there more than ever, with very uneven surfaces we have to make to jump, do acrobatics and receive impulsively, make races are very varied and dynamic, in any of the 32 circuits in both the new and the old, fully adapted to the circumstances of this release playable.

The selection circuit is very good , well-balanced and varied, and not about those who do not want to play them, all are fun and challenging.The huge highways discarded Mario Kart Wii, and in almost all cases require fairly expertise, have narrow sections and there are many obstacles and items that we have to avoid, plus the outrages of the twelve runners. Although at first it may seem that there are many alternative routes and roads, when you get to play in 150 cc and see the mischief making machine, you discover many tricks and shortcuts, that would otherwise not you have thought of. Although new are the most spectacular graphically, the ancients have received excellent facelift, both in gameplay and visuals, and seem totally new.

As for the objects, some large players in racing Mario Kart , the huge list of previous installments are added four new. La Flor boomerang , which allows you to throw a boomerang three times, and that can impact both the way up and in the back, allowing curious strategies. The Piranha Plant that is located in the front of the kart and biting everything is in its path, from brokers to banana peels, coins and other obstacles, which gives you a brief but important sprint, and It makes all rivals away from you like the plague. 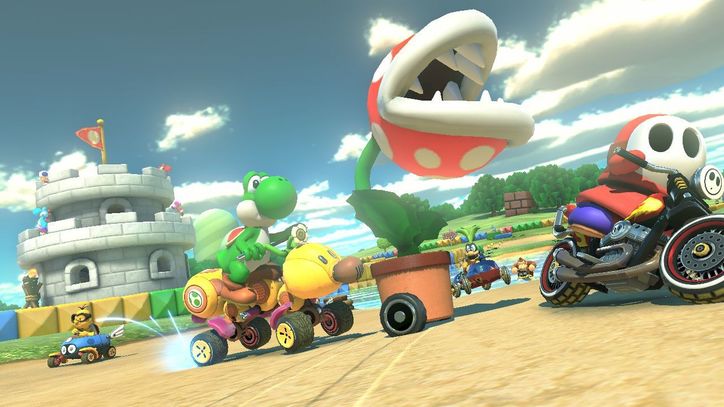 The Crazy Eight , eight different objects that rotate around the vehicle, and that can throw on, and Superbocina one of the most important developments of this delivery, horn blaring through the air throwing vehicles and objects found close, including blue spiked shell, that we always bothers a race when we first, we can now fight this. Although the vast amount of hours we played, rarely been given the circumstance of having a Superbocina head and go, so do not fear that the “beloved” blue shell remains as bloody as ever.

The comparison of what Vigor looks like on Nintendo Switch and Xbox One
April 11, 2020