Mario once again proposes a new and fun party game to honour the series more than 20 years of history.

A lot has happened since Mario organized his first party on Nintendo 64 in that distant and glorious year 1998 (probably the best in the industry’s entire history). Since then, Mario Party has received 10 numbered installments and several spin-offs, with the notable Super Mario Party for Switch being its most recent iteration, a long list of games to which we must now add Mario Party Superstars, a title with which Nintendo aims to pay tribute in style to those long and fun afternoons in the company of our friends by rolling dice and beating minigames. Do you achieve your goal? You have to keep reading to find out.

In this way, we are again faced with a board game in which we must compete to get all the stars we can before the game ends when we reach the maximum number of rounds that we have set. To do this, we will have to roll dice, participate in minigames, win coins, use objects, take advantage of the mechanics of each board in our favour, have some luck and, of course, hinder our rivals whenever the opportunity arises.

As you can see, it is a Mario Party strain pure that can not be further revolutionized about or altered minimum formula of the series. The objective of this installment is to become the definitive compilation of the series, bringing together in a single title the best minigames and boards that its main iterations have left us. 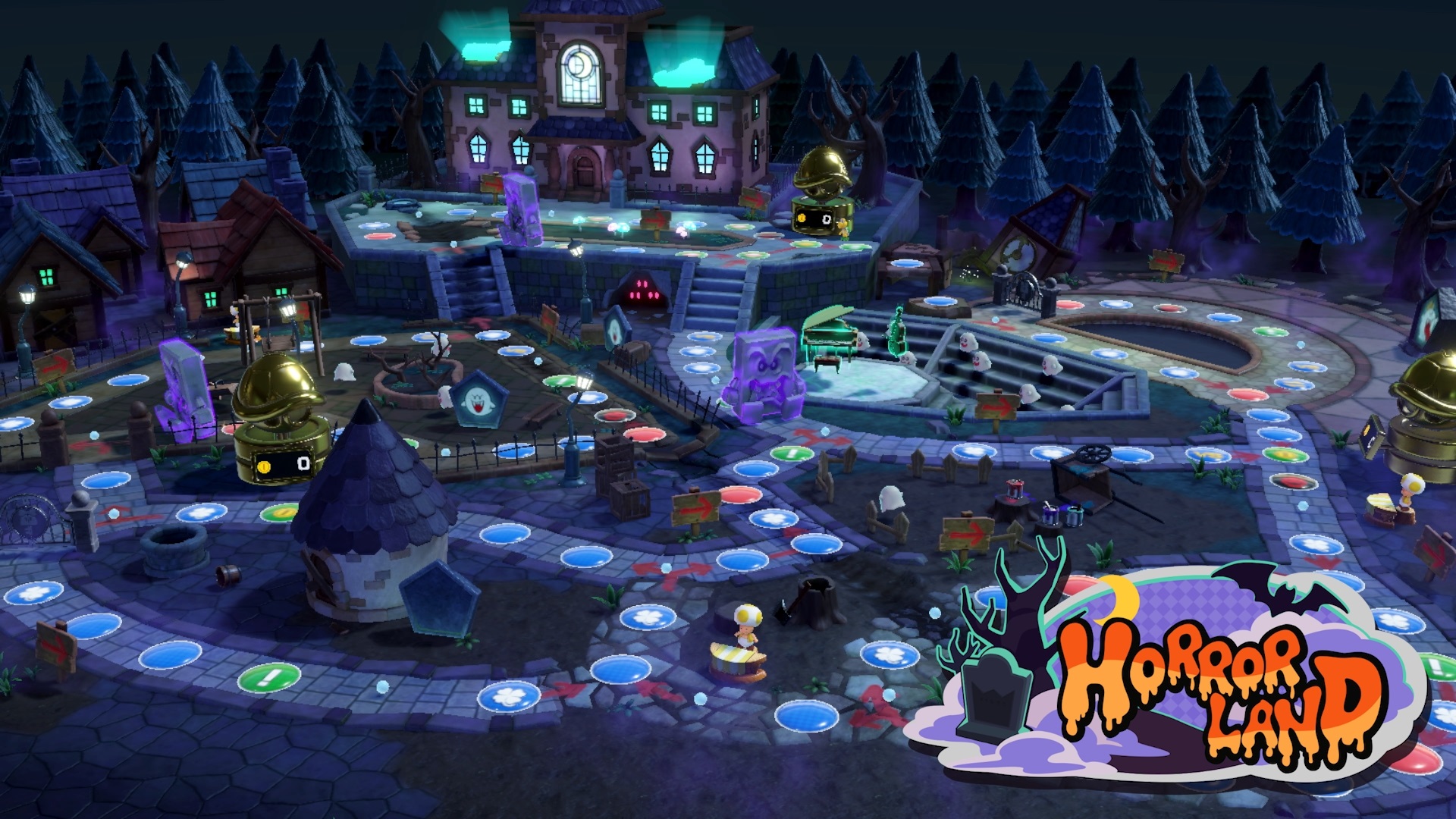 We probably have one of the most debatable points of the product since this is equivalent to the fact that there is nothing new at the content level. All they offer us is gigantic recycling of known elements, something that you may like more or less. However, the real problem is the shortlist of boards and minigames that it includes compared to its objective. 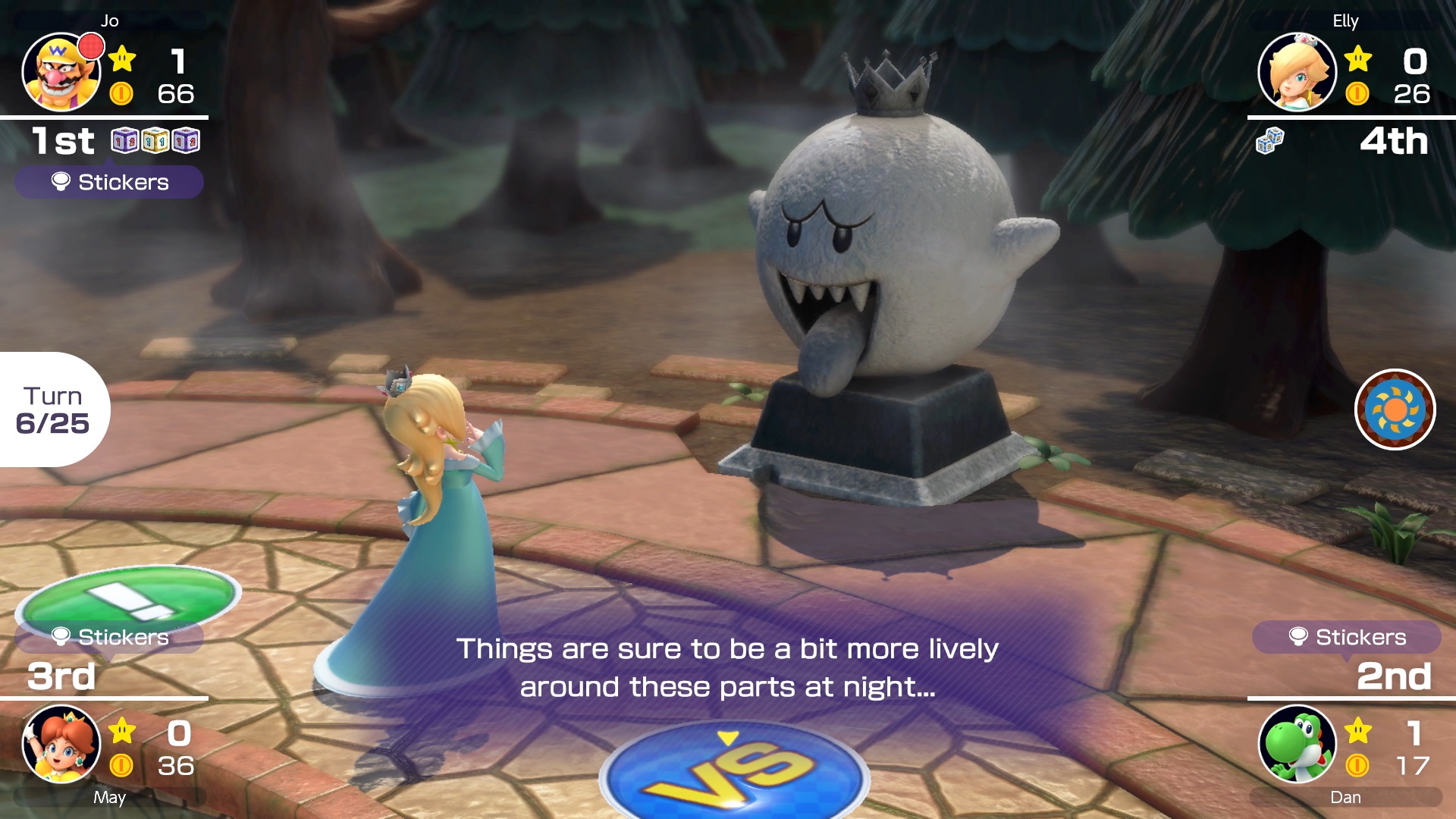 In total, we have five boards and 100 minigames, a figure that does not differ much from what we usually see in each installment but which seems insufficient when what is intended is to honour a series with more than 20 years of history since you end up leaving out a lot of mythical and iconic content. 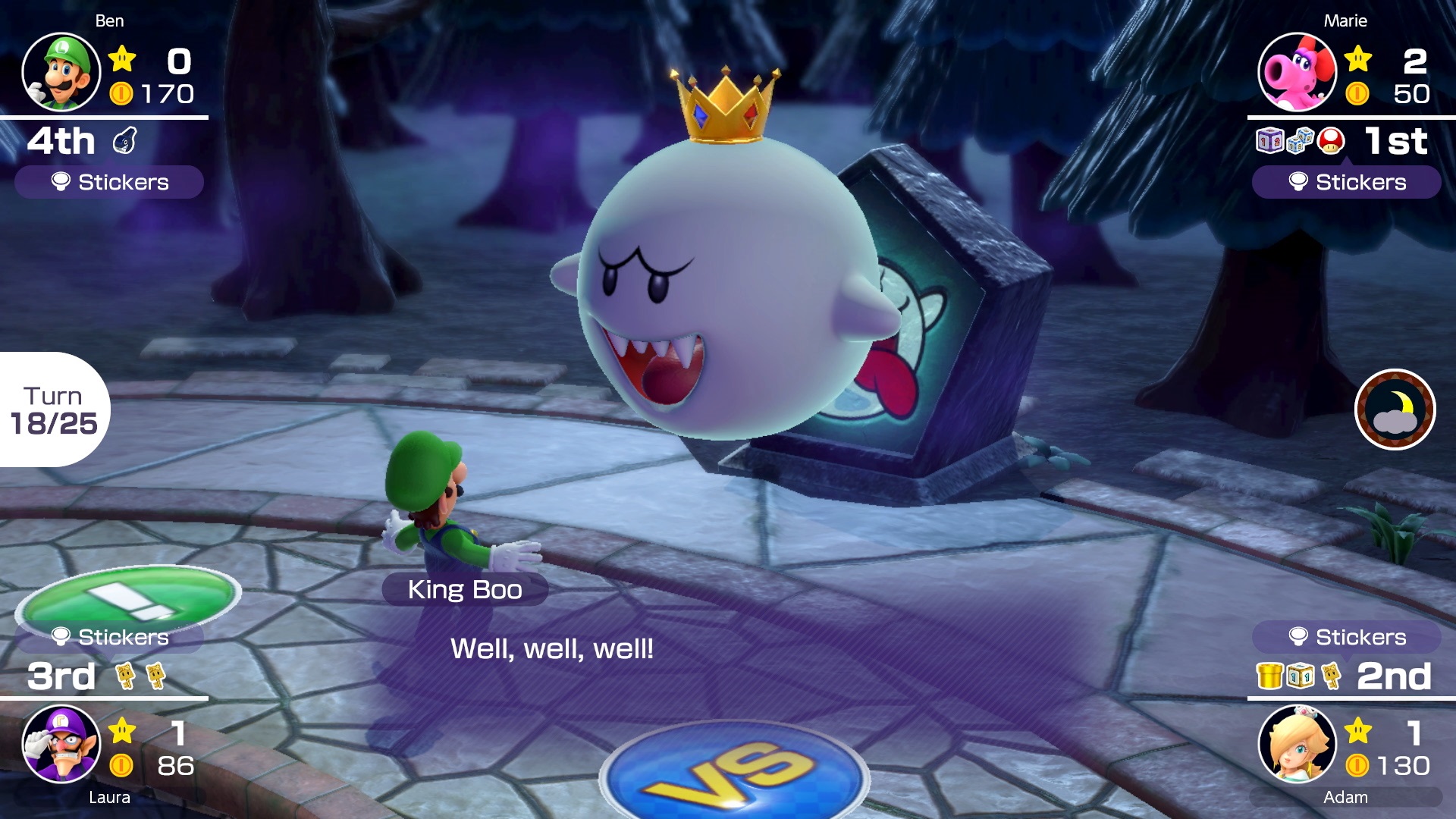 Regardless of the numbers, the selection of boards is limited only to what we saw in the original Nintendo 64 trilogy, the list being as follows:

Most of them are pretty decent, and some like those of Mario Party 2 and 3 shine with their light. However, it is a pity that they have been left out of authentic wonders like “Bahía Casilla” from Mario Party 6 by limiting them to only the first three games. Something similar happens with the minigames, whose selection leaves us with some of the funniest of the entire series. However, a good handful of them also lowers the bar, which translates into a worthy list of tests with irregularities. 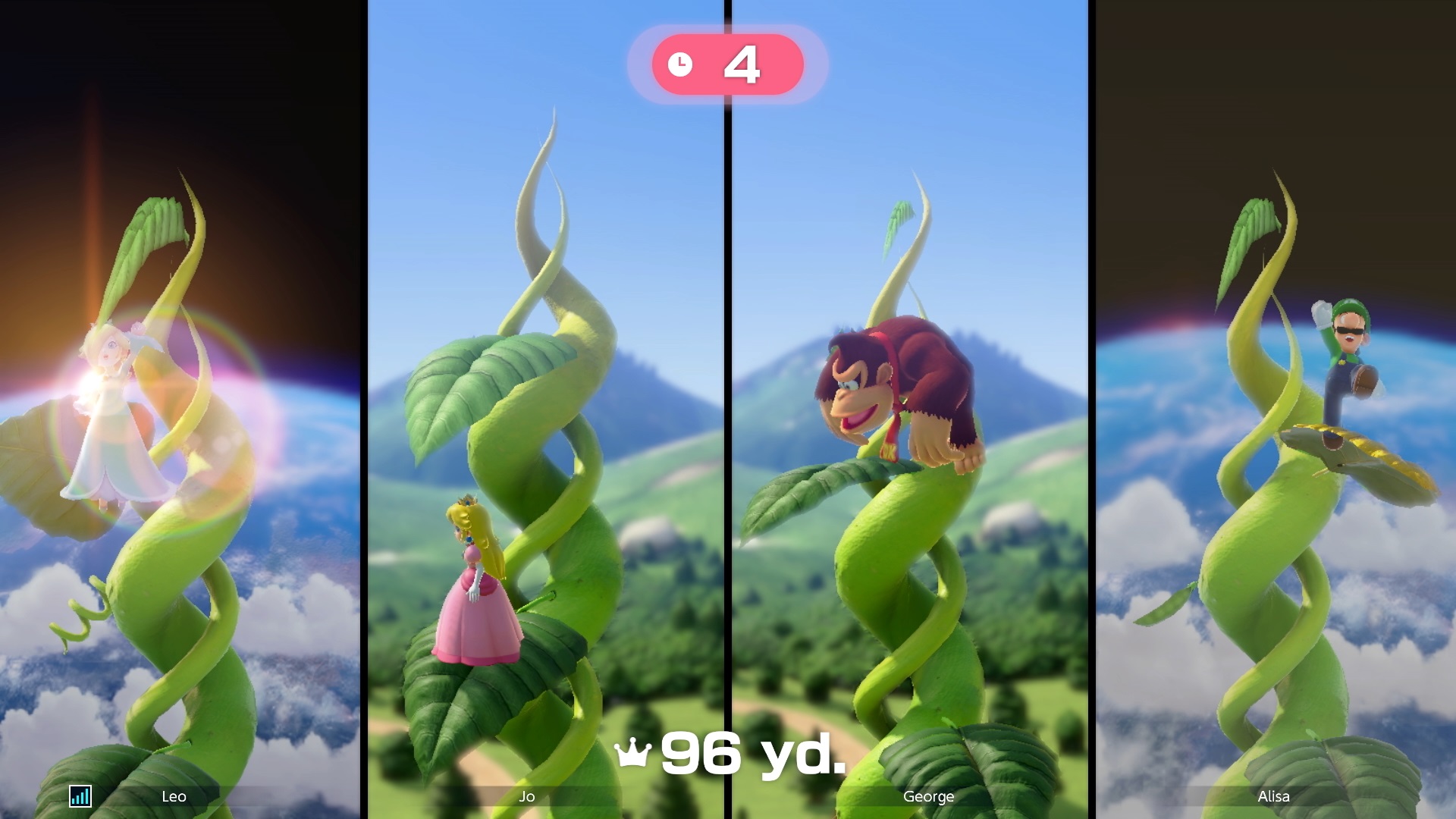 Of course, we do not want anyone to be deceived: we may expect a collection of boards and minigames somewhat more round, but that does not mean that it is still a title with which we have had a great time playing with friends and that it has offered us a few meetings full of piques, laughter and the occasionally broken friendship along the way. The balance is positive, and most of the contents perfectly fulfill their function of making us enjoy in a company and taking into account that more than two decades have passed since the last time we played many of the contents that it brings, We are convinced that for many players they will be completely new, while for the rest it will be almost like rediscovering them for the first time. 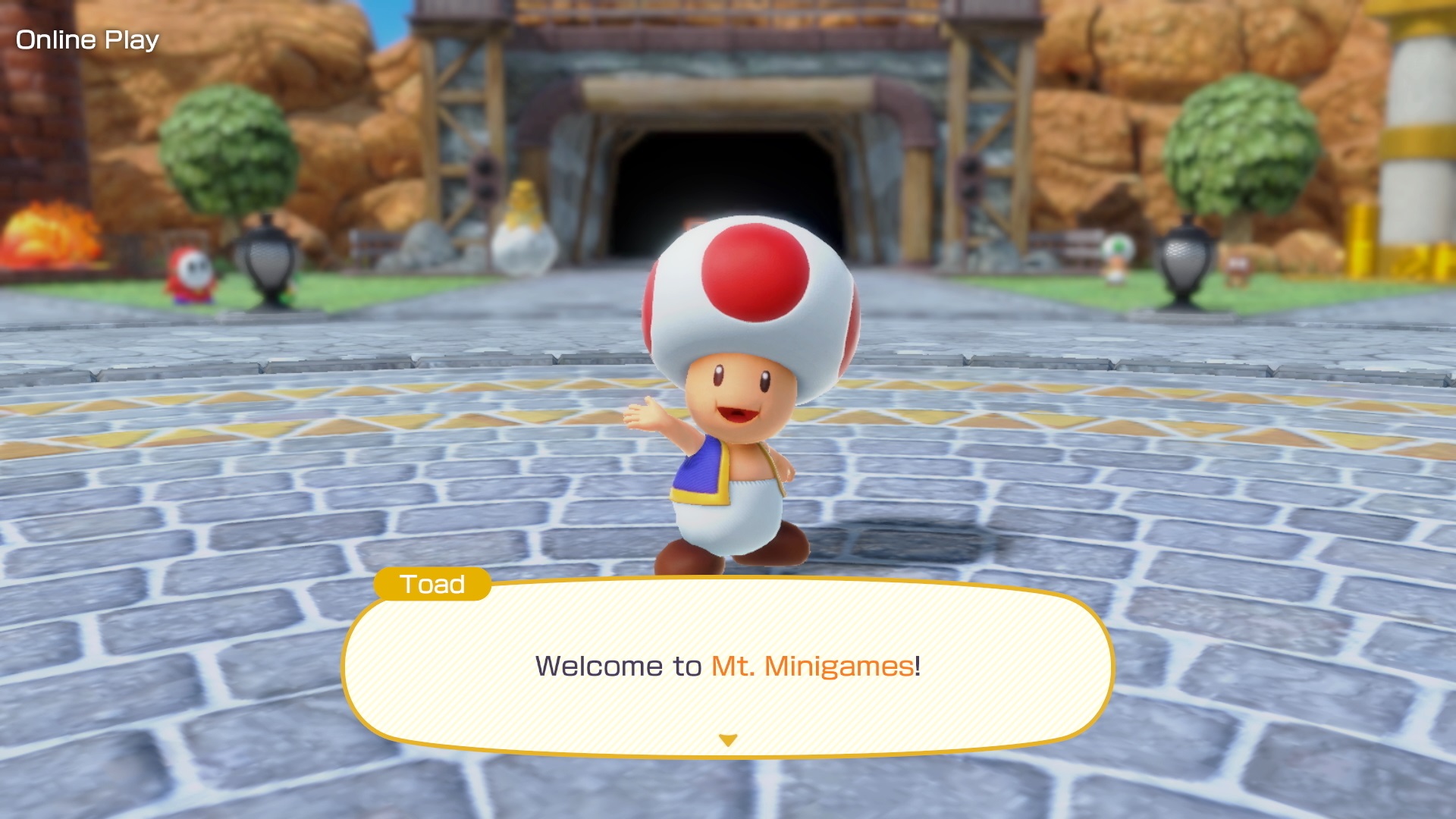 The most customizable games and an online mode to match

In addition, there is some exciting news that we liked very much, and that makes the saga finally meet the minimum requirements for a title of these characteristics that is launched in the middle of 2021. To begin, comment that the customization options of the games have been increased, being able to configure them as much as we want to suit our needs. In this way, we can choose things such as there are bonus stars at the end, the number of rounds and even the type of minigames that we want to appear, which are organized in lists that go from those that are purely random or skillful to those that are more affordable to play with people without much experience in video games.

As you can guess, thanks to this, we can make the title more or less demanding and significantly reduce the luck component that exists when deciding the winner of a game. However, the chance will always be present in a different way. Another and it will be difficult for you to get rid of the odd injustice that makes you unleash more than one insult against gambling or your friends. But what would Mario Party be without this component? 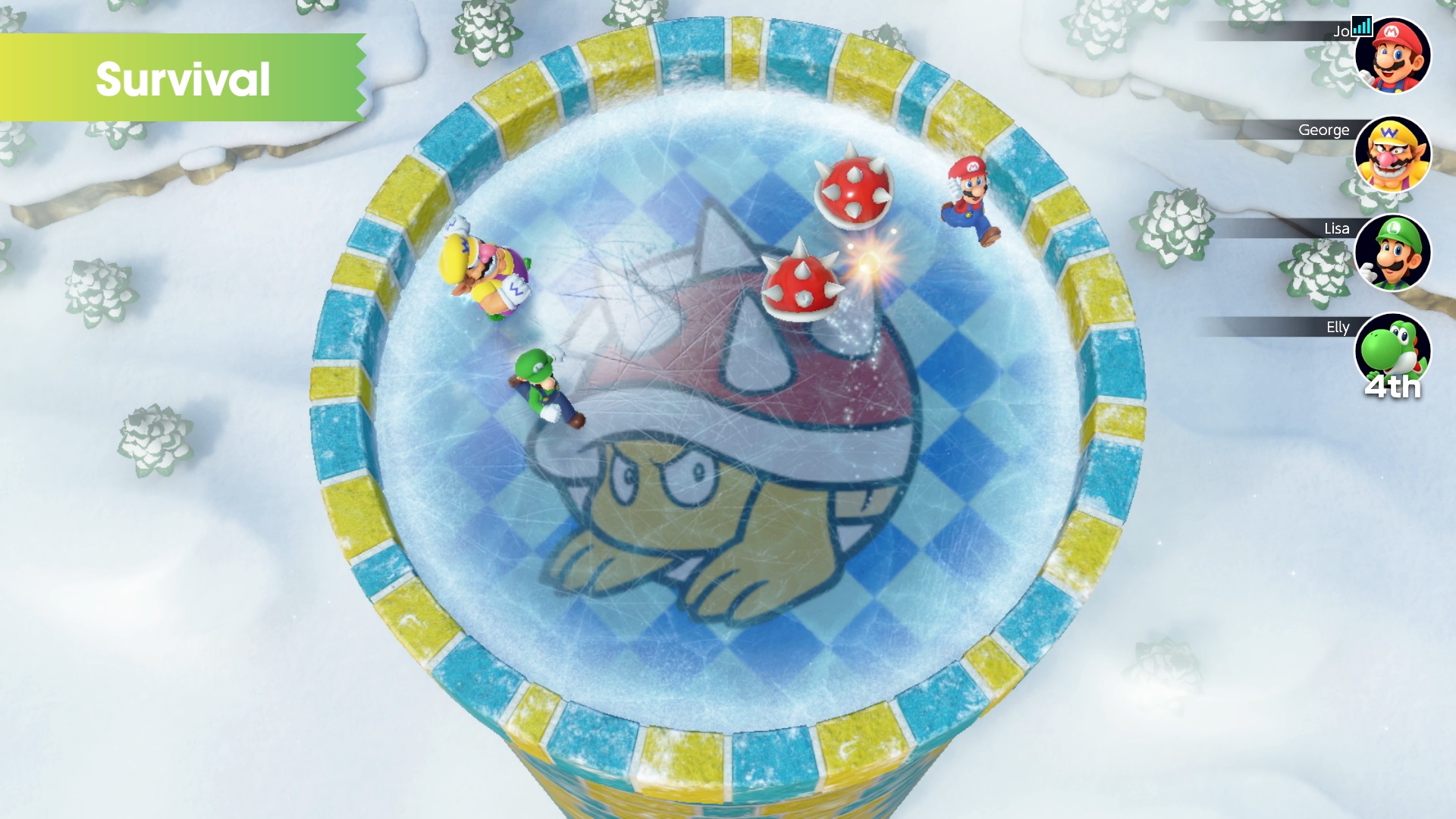 In another vein, we are forced to emphasize that all game modes have online functions so that we can enjoy both batches of single minigames and full sessions with a board of up to 30 rounds if we wish, either With friends or with random rivals, which should save us the tedium of having to play against the AI ​​when we want to give it a go. We do not have any acquaintances available. What’s more, it is even possible for multiple players to join an online session from the same console. 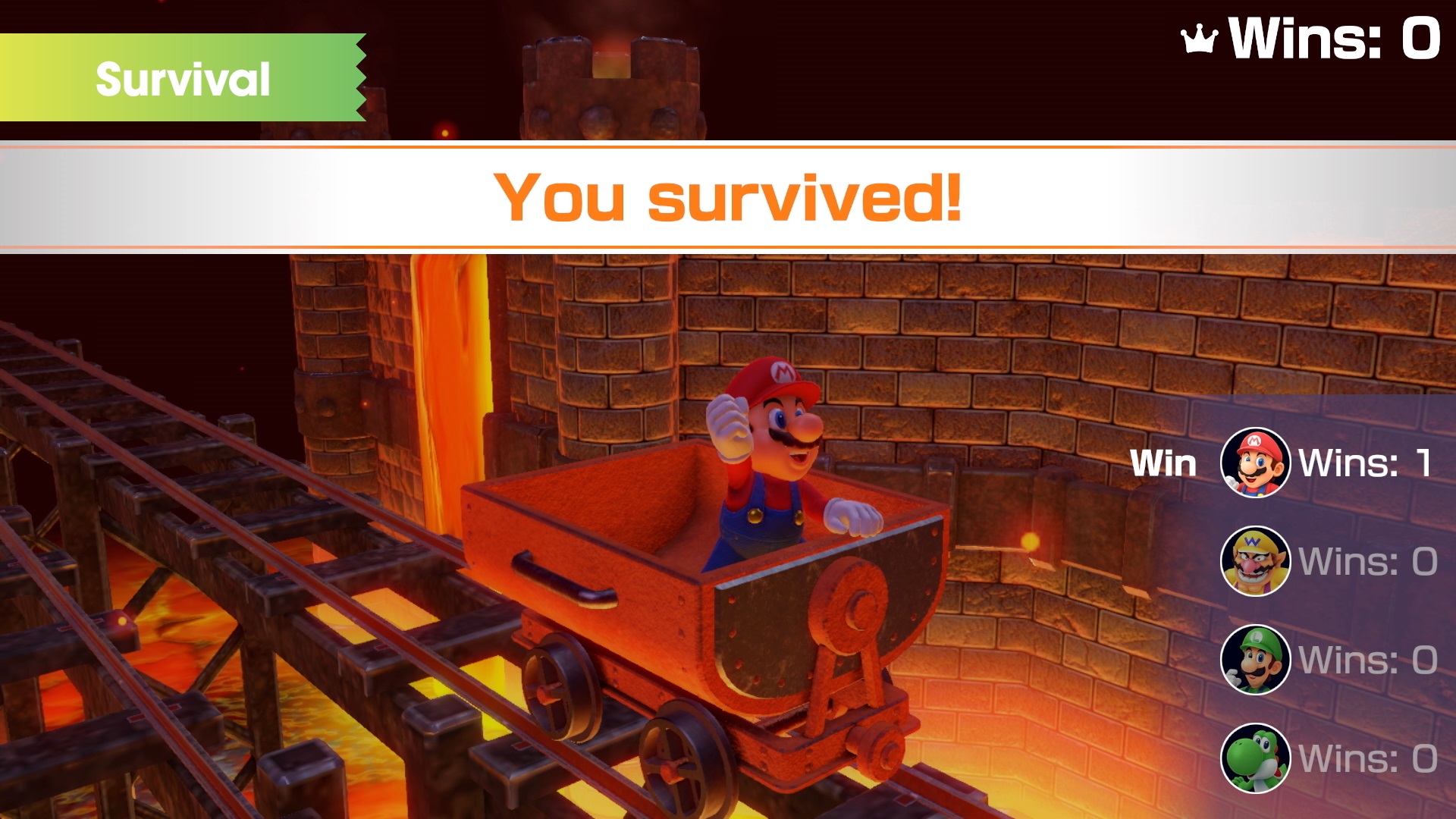 The good news is that from what we have been able to test, the network code works perfectly, and we have not experienced lags, cuts or disconnections of any kind, even when playing on a laptop over Wi-Fi. Yes, if we get exquisite, there are some particular tests in which we have detected a minimum of input lag, but being a title that does not require too much precision, it has never really affected us. 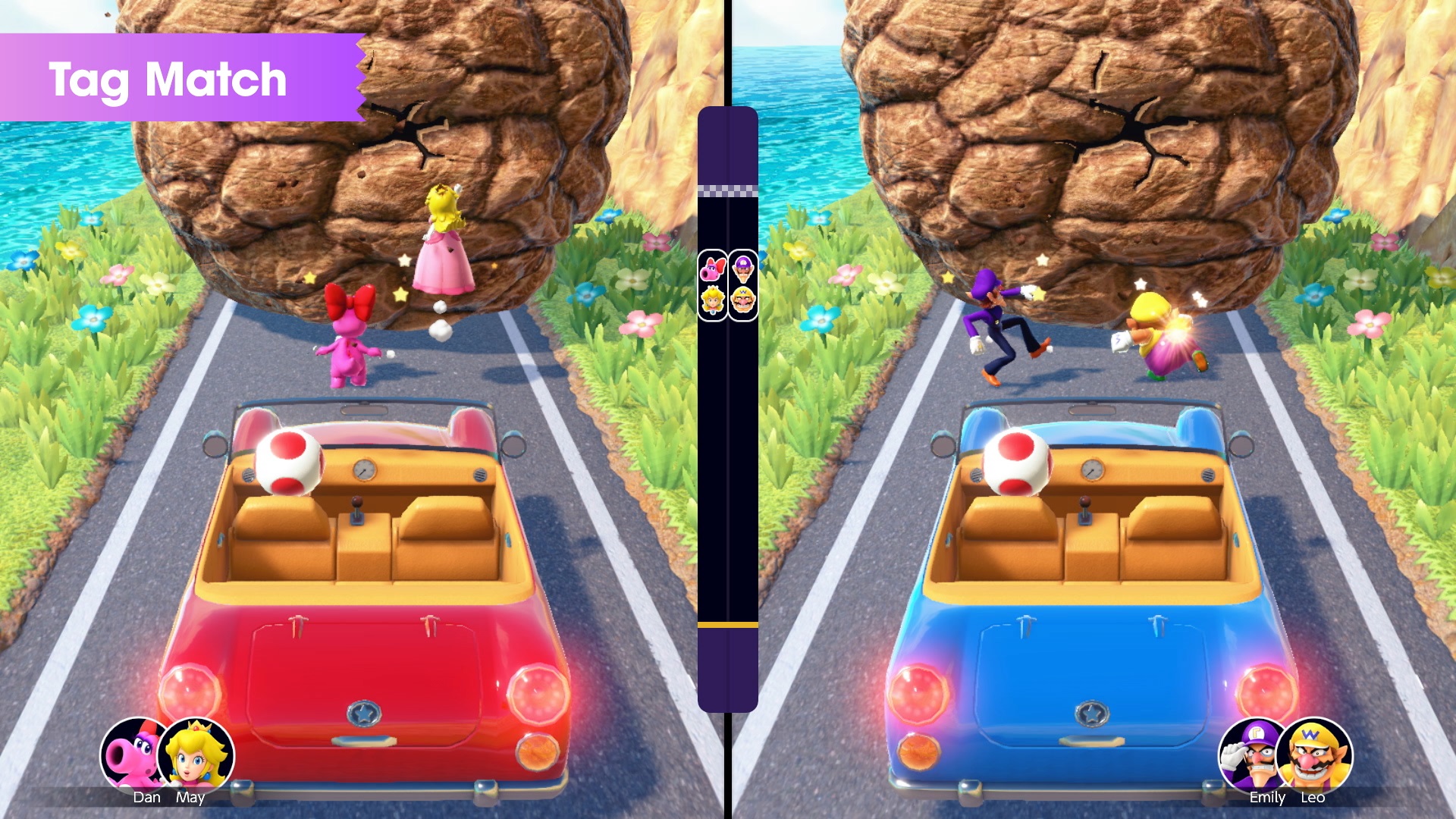 Continuing with the positive aspects, it includes a good number of options. For example, we can suspend and save a game with friends and resume it later or even expand the number of rounds at any time. And yes, once you enter a room, it will not be necessary for you to leave and be invited again to change the board, rules, characters or modes. These are details that are not always taken care of too much in Nintendo games and make the online modes of many of their titles go a step behind those of other companies, but that here they have been pampered to complete the online experience is optimal, satisfactory and fluid.

In addition, a sticker system has been included to make quick comments, and there is a store where we can buy various collectibles with the coins that we accumulate after each session, including designs for our player card, songs and multiple elements that then we can enjoy in the gallery of extras. Add in the possibility of levelling up to unlock more items and a complete achievement system that will take you many hours to complete in its entirety, and you will have enough incentives to encourage you to continue playing. That defeats do not taste so bad. 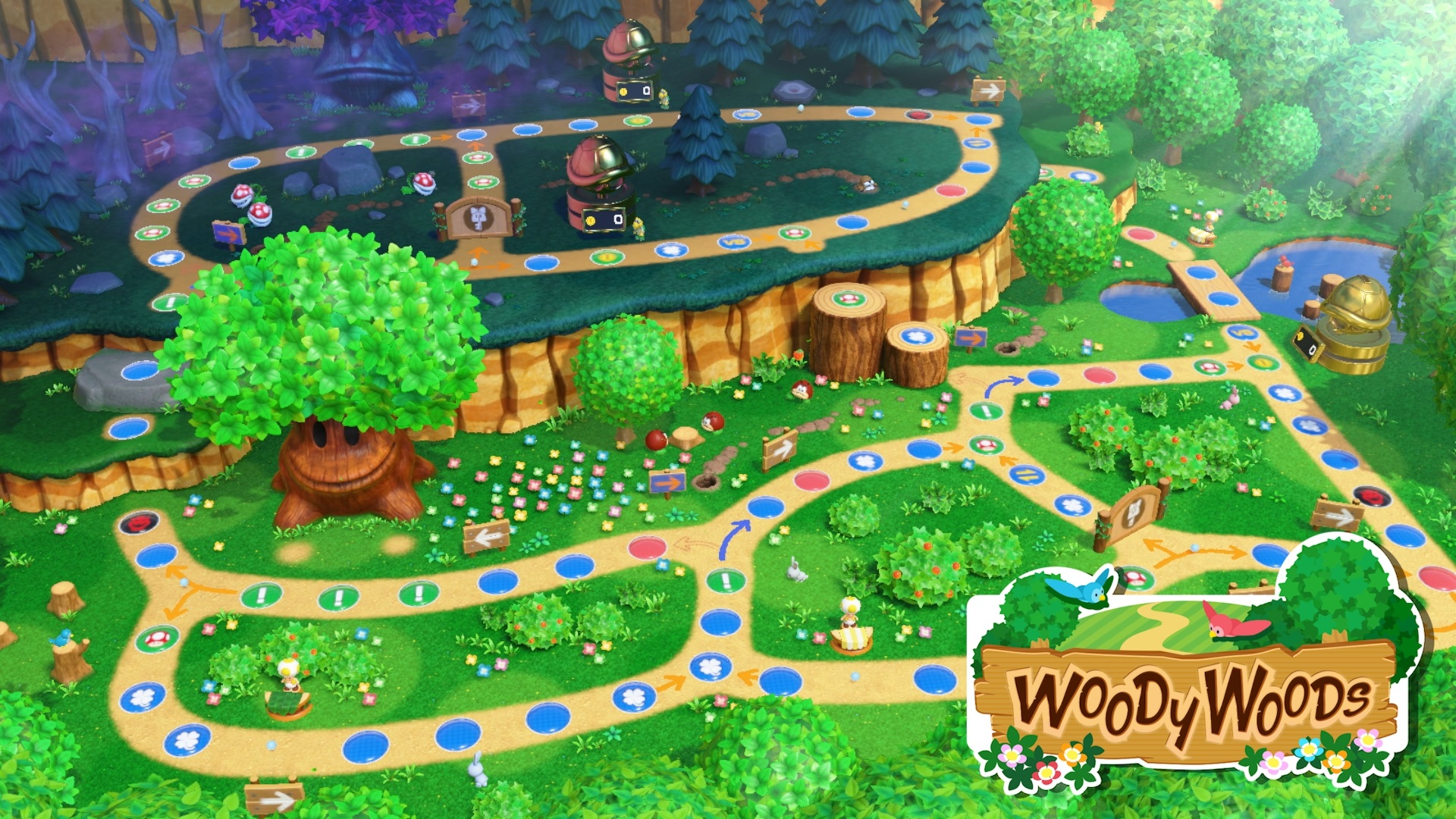 On a visual level, we find an excellent title that, without having to be a technical marvel, leaves us with good modelling and very competent graphic remakes of the boards and scenarios that make everything look just as you would expect from a title for Nintendo Switch. The performance is quite good, and the image is very sharp and clean both on the laptop and on the desktop, which ends up being a beautiful, very colourful and easy-to-look title that does not need much more to convince. The soundtrack follows the same line with upbeat and catchy melodies to bring back terrific memories. The effects are also quality, and the “dubbing” once again features the usual shouts and expressions of the characters in the Mario universe. 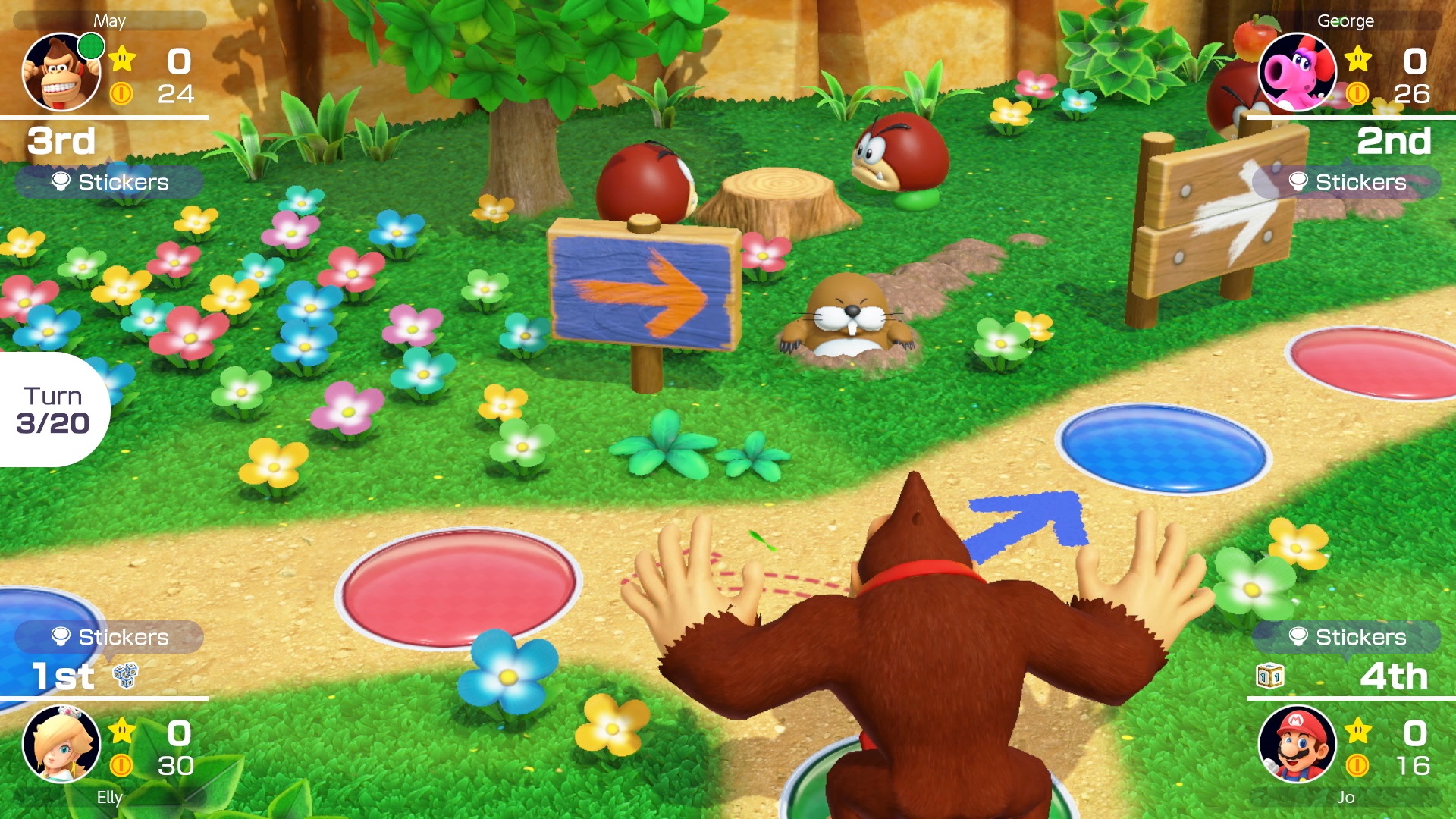 Maybe Mario Party Superstars are not the best installment of the series, but you can not deny that they still know how to entertain and make us spend a wonderful evening filled with laughter and glares with our friends. In addition, a significant advance has been made in regards to its game customization options and online modes, greatly facilitating the possibility of playing against other players whenever we want, regardless of whether our colleagues or family are available or not, something which considerably increases its appeal and gives us reason to be optimistic about the future of the series. But now, in the present, what we have is a purchase option that players should take into account as soon as you are looking for a title that offers you fun without complications in good company, because in that, the most important thing, we assure you that it does not fail.

We prepared this review with a review key for the title provided by Nintendo.