One of the greatest classics of the PlayStation One comes back to life with a very original remake.

At the end of 2017, Sony announced that they would be bringing back Medievil, one of the greatest classics of the first PlayStation. We really wanted to see the charismatic Sir Daniel Fortesque among us again, and this week, the long wait finally comes to an end with a remarkably faithful recreation of the adventure that many of us conquered in 1998, but is it still up to par?

The resurrection of Sir Daniel Fortesque

As we have already mentioned, we are facing a remake that seeks to reproduce the original game with excellent fidelity, updating graphics, sound, controls and little else. The title goes very much in line with what we have seen with Shadow of the Colossus or the trilogies of Crash Bandicoot or Spyro.

An important detail is that remake is based on the version that was released on PlayStation One, and not the Medievil: Resurrection, the disastrous revision for PSP, which is good, as there is more and better content. 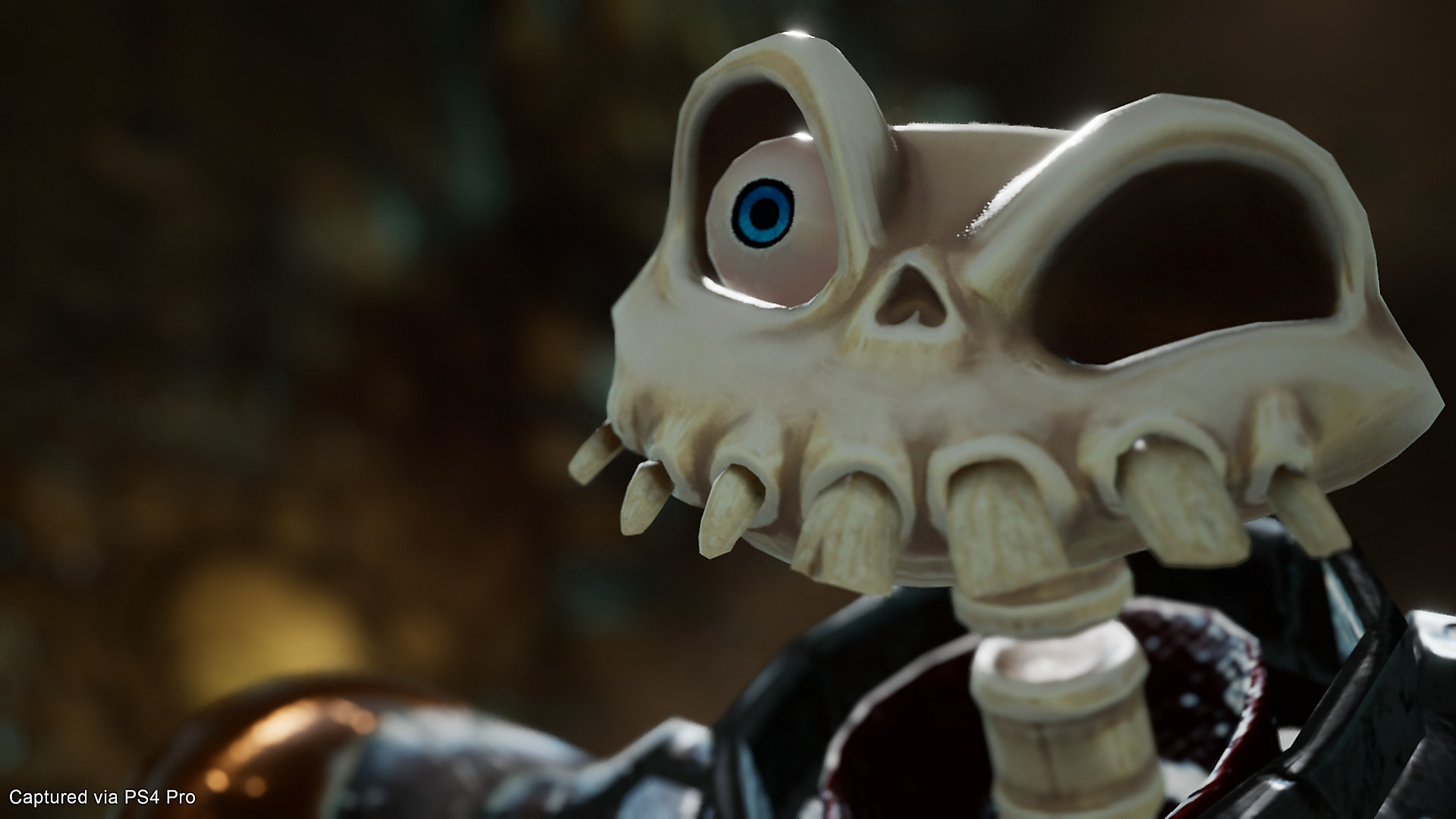 Thus, his story takes us back to Gallowmere, dark land of medieval fantasy in which Sir Daniel Fortesque is hailed as a hero after giving his life to defeat Zarok, an evil sorcerer who tried to conquer everything. However, the reality behind the legend is quite different, since the truth is that our protagonist was the first to fall in the battle of a crush in the eye.

But as they say, evil never rests, and hundreds of years after its defeat, the sorcerer returns to the world and throws on these magical lands a spell with which he awakens the dead and controls the will of its inhabitants. Luckily for everyone, this also causes the Fortesque skeleton to return to life, thus having a new opportunity to redeem itself and truly become the true hero of Gallowmere. 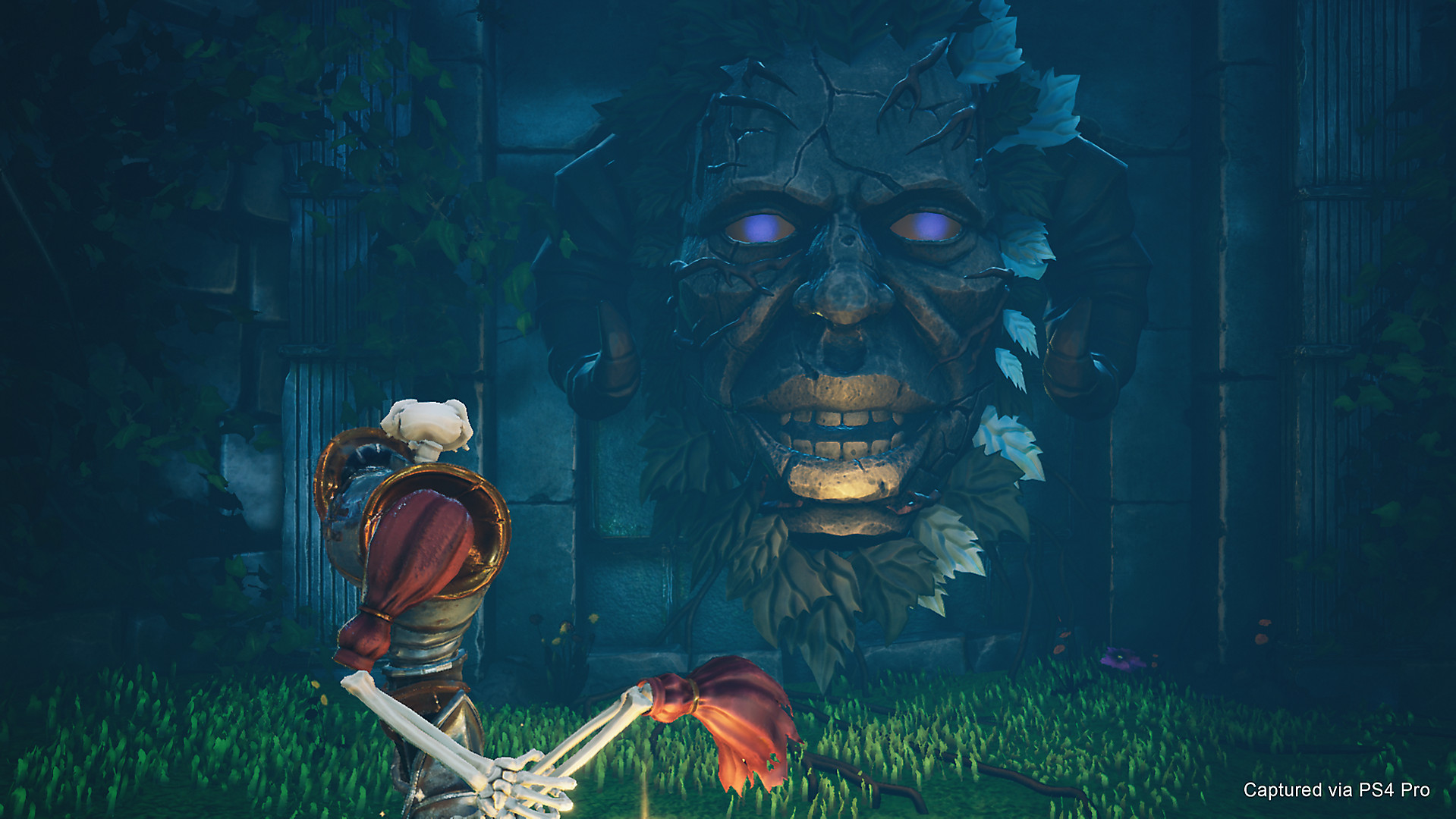 The story is without being complicated, works very well, perfectly justifying adventures for a strange kingdom and full of the most interesting characters. Also, the script has many doses of humour, and there will be a few times when its dialogues will bring us more than a smile with its constant teasing and satires to the genre of fantasy.

An adventure from another time

You will not find significant changes to the controls, so we will enjoy an action game in which we must overcome a series of phases that mix with excellent success fighting, exploration, puzzles and platforms. The main thing in them is usually to eliminate the sufficient number of enemies to load a chalice, pick it up to receive a reward (mostly new weapons) and look for the exit, although sometimes we will also have to find certain key items that must be used in other screens to be able to progress. 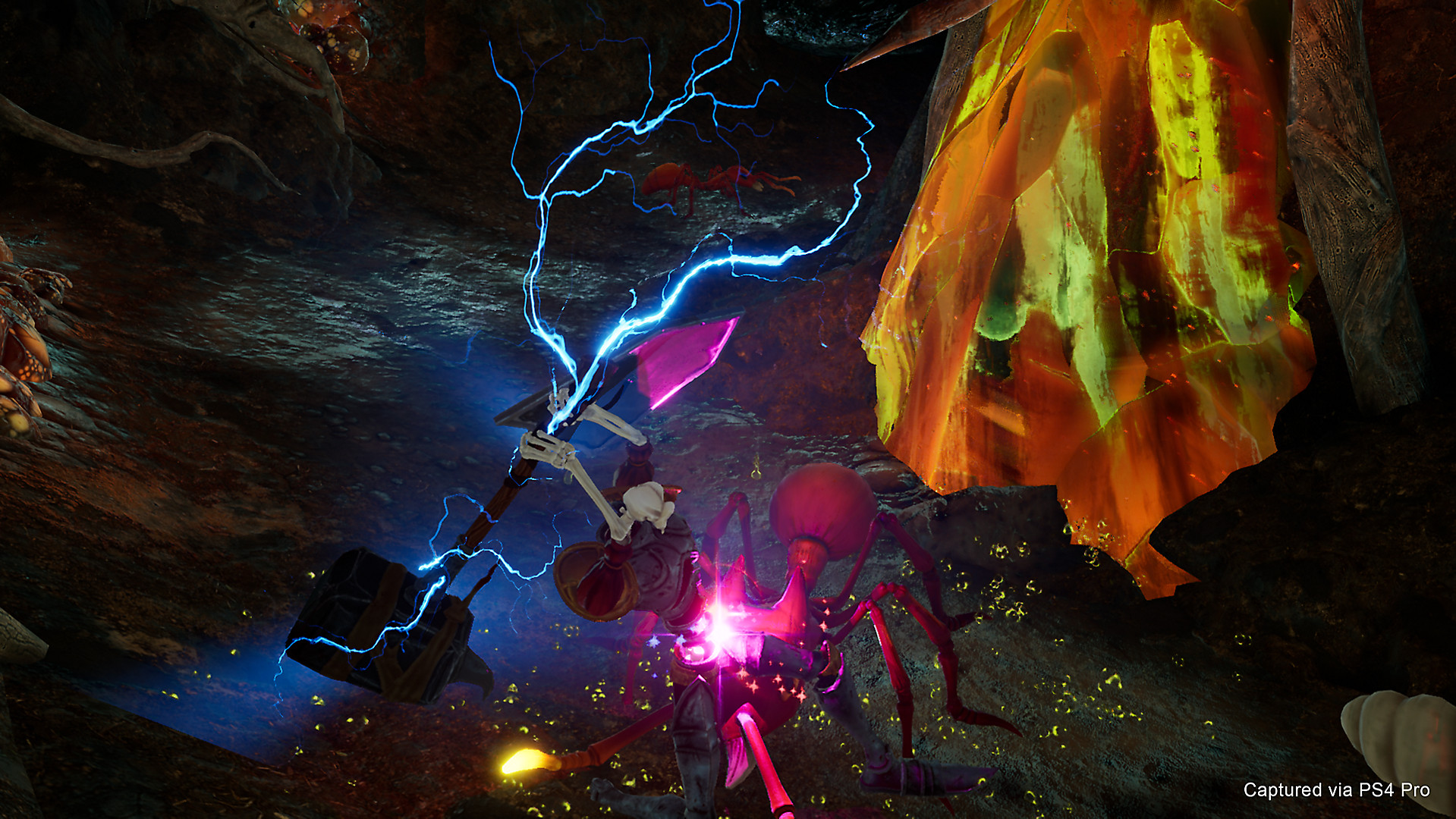 This particular structure is very reinforced thanks to a meticulous and, above all, varied level design. In fact, here we have what is its greatest virtue, since if Medievil is characterized by something, it is because of how different all its phases are from each other, both in thematic and in development. As soon as we will be touring a dark cemetery that dodging traps in a field full of scarecrows with very bad fleas, solving riddles in a labyrinthine garden, fighting hordes of madmen in an insane asylum, avoiding harming the villagers of a town that is being controlled by Zarok or “platform” in a flying pirate ship, to mention just a few examples.

Thanks to this, Cambridge Studio was able to design a game with a lot of personalities and full of screens very remembered today, something that Other Ocean Interactive, the studio in charge of this remake, has wanted to respect … both for the bad and for For the good, since not all levels have endured the type so well, and there are certain things that could have been reviewed. One of them is their final bosses, extremely basic and straightforward, denoting that they are products of another era and to which we will defeat, for the most part, almost without worrying about avoiding their very few attacks.

This is something that can also be applied to many of its mechanics and controls. The latter has been slightly retouched to make Dan’s movement more comfortable, who no longer spins so wide to avoid many of the absurd deaths we had in the original when trying to move through narrow aisles with chasms to the sides. Unfortunately, the camera and the fighting still leave a lot to be desired. The first constantly tends to be in very poor places that hinder our visibility and the calculation of the jumps, and in the few places where we can move it we will need to manually relocate it all the time so that it does not leave us cold, something that we just finished getting used to it, but it is far from ideal. 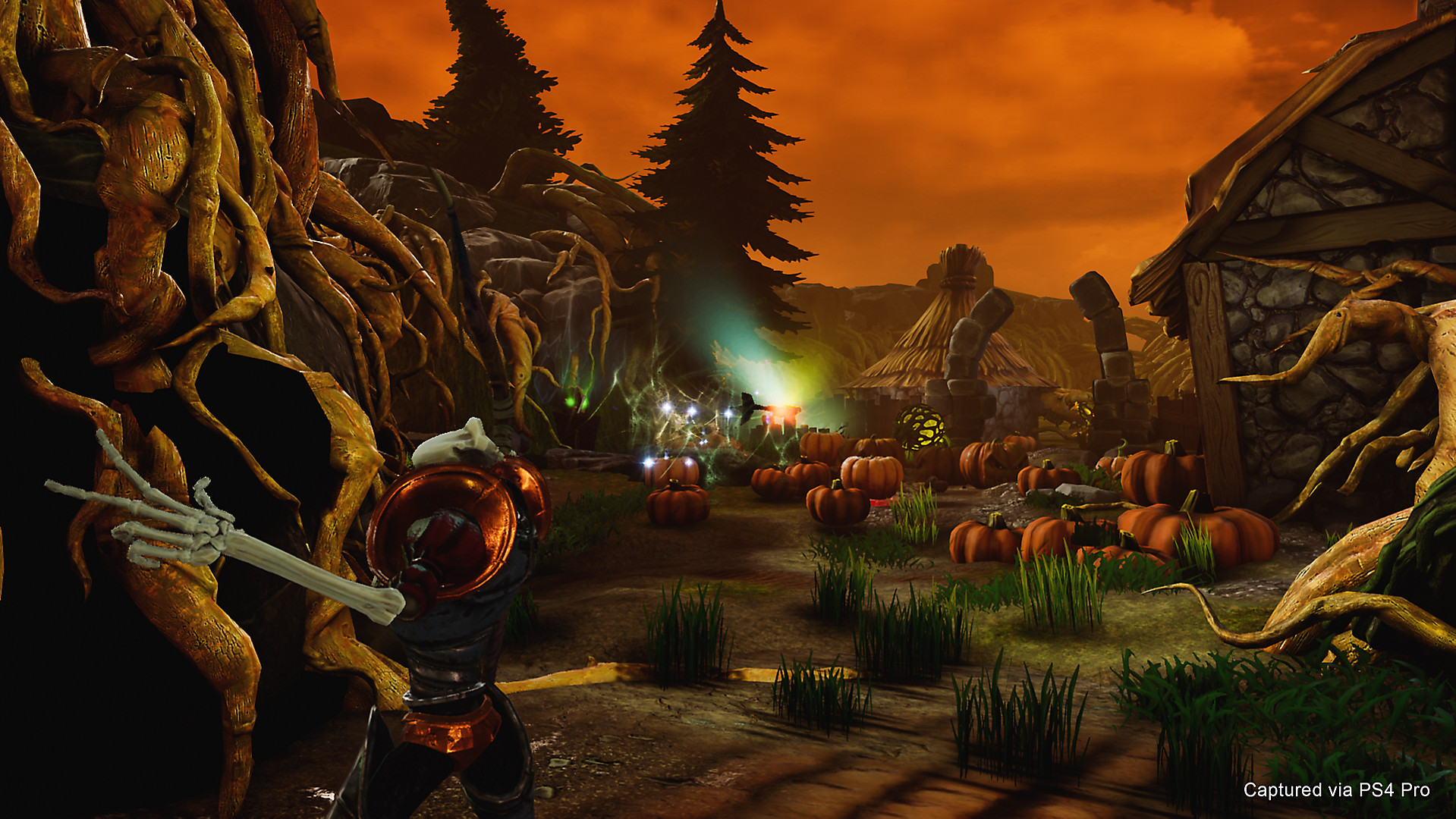 With regard to the fighting, these are summed up in an incessant pounding of buttons without much sense and with a questionable detection of impacts that eventually cause us to receive damage without being able to do anything to avoid it, although the difficulty is so low, and There are so many places to heal that this is not usually a big obstacle. Yes, it is true that the way to move the sword of our protagonist is somewhat different and that it is a little easier to keep our rivals at bay, but the feelings are not satisfactory today. Another problem derived from this is that we will hardly find reasons to use many of the weapons that we will get throughout our adventure and generally, everything is usually summed up by sword, hammer and axe. Speaking of the arsenal, We would like to highlight the right decision to allow us to equip ourselves with a main and a secondary weapon to be able to switch between them in real-time and without having to open the menu. 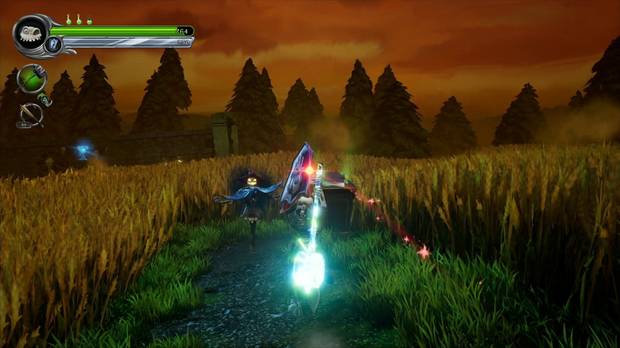 As we have already mentioned, we are facing the same game that we could enjoy more than 20 years ago: same story, same phases, same bosses, same puzzles, same jumps, same enemies, and so on. That is, if you still have it fresh in your memory, you will know what you have to do at all times, and the guides of yesteryear are still just as valid for this new version.

However, this has not prevented Other Ocean from trying to alleviate the short duration of an adventure that hardly happens after six or seven hours in a first game. To this end, it has occurred to them to include a series of collectibles and optional challenges that we will unlock by opening a special chest in one of its last phases. 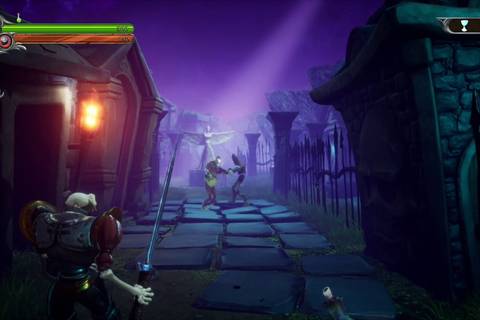 When we do this, we will see how, in all screens, a soul will appear in sorrow that will ask us to fulfill his last wish. Each of these spirits will require us to go to a specific place that is always on a different level than we found it, and when we get there, they will pose a challenge. These are very varied, although they are not especially inspired, and if we complete them all, we will receive a surprise that we will not ruin. We have to admit that this kind of treasure hunt has become very entertaining since it tests our knowledge about the game by forcing us to find out the places to which we are asked to go, something that is not always too clear and to what we have to look closely at the small details.

As expected, its graphics section has been completely redone to offer us a title that lives up to current standards, although you don’t expect anything, especially dazzling in this regard. The textures and modelling are somewhat basic. The lighting is extremely flat, the animations are nothing of the other world, the rate of images per second is not entirely stable, and the scenarios would not have hurt something more in detail. Despite this, the artistic design of the entire work is so good and has such a personality that its technical section is more than enough to be a game that easily enters the eyes, leaving us some surprisingly beautiful prints on certain levels that will remind us inevitably to an animated film by Tim Burton. 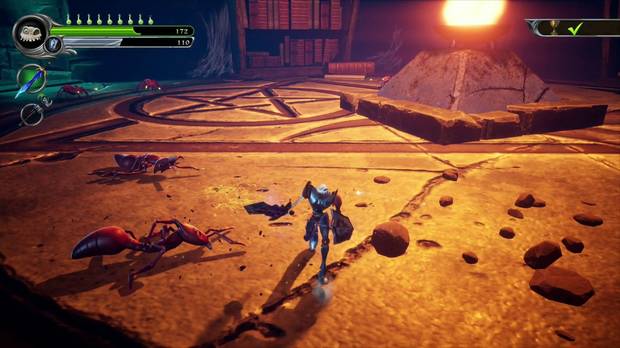 Something that we must comment is that the title lacks a polishing layer since we have found some somewhat strange bugs, such as enemies that standstill without doing anything, chests before which our hero could not position himself well to open them, walls with which we were hooked and even a couple of crashes. They are not too frequent mistakes or ruin the experience, but they do happen from time to time and can be slightly annoying.

What we can not put a single catch is its soundtrack, a real wonder at all levels. For this occasion, all their themes have been reorchestrated, and the new arrangements have been commissioned by their original composers, who have ensured that everything sounds more spectacular and overwhelming than ever. In addition, it now behaves dynamically, so it adapts to what is happening on the screen. Of course, the effects are also at the same level. 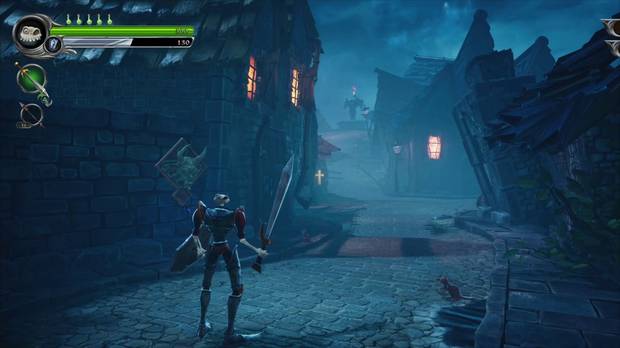 Voices sound exactly as we remembered, including the accent of the Knight who gives us the Magic Sword or the Latin pirates.

This has given us a punch of nostalgia so great that it has cost us to recover from it, although it has also brought with it some unexpected problems. The greatest of them we have in the non-existent lip synchronization, something that also extends to the gestures and expressions of the characters when we talk to them, which do not correspond in the least with the intonation that the phrases have. In addition, some interpretations leave a lot to be desired and are very over-acted, with voices that are repeated and that it is clear that they are reading, as in the case of witches.

We are very fond of Medievil, but time does not forgive and, in the end, we have enjoyed it more for nostalgia and the memories it evokes than for its virtues. Make no mistake, it is still an adventure with a unique personality and a charisma that many would already like, and if we can forgive its defects, we will enjoy a very entertaining, varied and charming experience. However, those problems and mistakes that were previously easy for us to forgive for being one of the first games that dared with 3D gameplay are currently not easy to overlook. 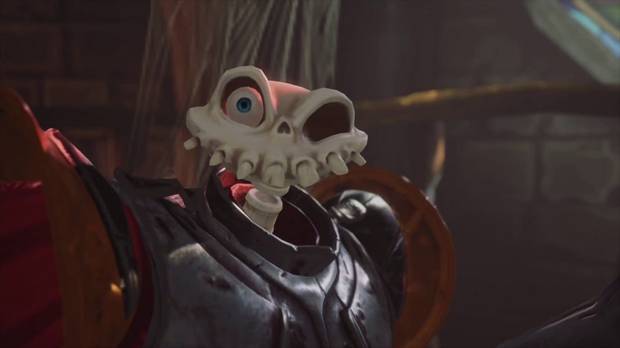 We love that this saga has been recovered, but this remake was screaming for a much deeper and more ambitious revision that did not remain in a simple graphic update, so the feeling that has left us is to be a lost opportunity to return all his glory and splendour to the great Sir Daniel Fortesque, a character that deserves much more pampering and affection in a completely new adventure.

We prepared this review with a digital download code provided by Sony.