The first Pac-Man World returns with improved graphics and small playable novelties that bring back a title that seemed forgotten.

After the success of the first Pac-Man, the character of Toru Iwatani sought to reinvent himself with each release. And not only in those titles where we went through a maze with new designs, rules or perspectives but also in new genres. Pac-Man Museum+, launched last June, is a sample of the enormous diversity of styles carried out by our beloved Pac-Man, from Pac Land to the lazy Pac-In-Time, the puzzlers of Pac-Attack, the strange Pac Motos or Pac ‘ nRoll Remix. So when polygons became everyday platforms, Bandai Namco’s mascot did not hesitate to be one of the first to leap.


Pac-Man World was launched on PlayStation in 1999 and achieved some success in sales and reviews, enough to have two direct sequels -already in 128 bits- although it was far from the impact of other platforms of the time. Bandai Namco now recovers it with a remake that gives a coat of paint to a title absent in other collections and allows us to see gameplay that is unusual in modern productions, an adventure of its time but that, against all odds, it still maintains its charm. 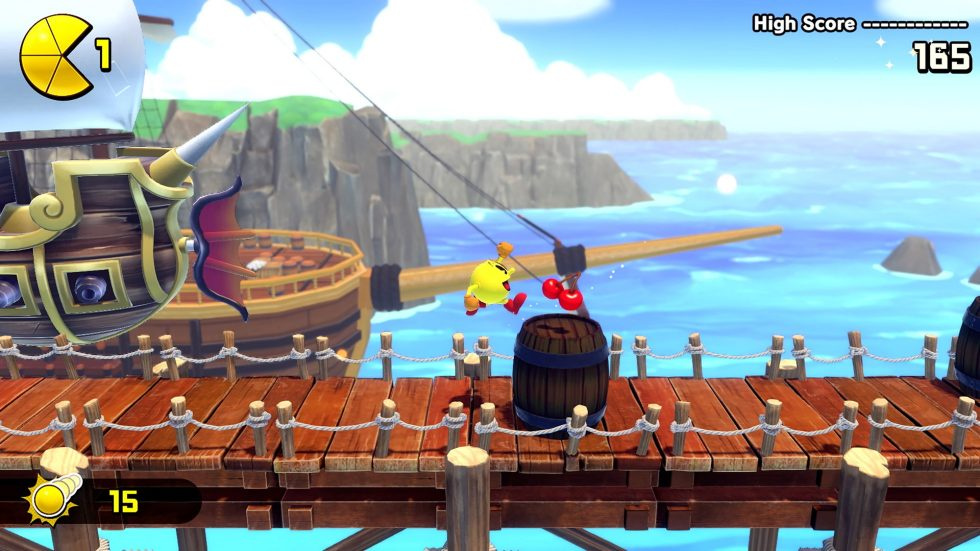 To save the family!

From very early on, Pac-Man was accompanied by a family that appeared in games, series and merchandising, giving a little more plot to the different adventures. Pac-Man World Re-Pac, like the original, welcomes us with a video sequence where we see how Pac-Man returns home, to his birthday party, in particular, to discover that his entire family has been kidnapped by, guess what, ghosts. In addition, these eternal enemies of the yellow ball are accompanied by the evil Toc-Man, a fearsome robotic Pac-Man. We don’t need more motivation to travel to an island, go through its different locations and rescue our family. Re-Pac brings minor changes, but the experience is similar to the original, a light-hearted platformer with hits and misses. And in the second half of the decade, there was a lot of experimentation with the genre and 3D: sometimes, we received authentic jewels, and on other occasions, the result was more debatable. Advantage of an industry that took risks? Most releases seemed unmanufactured and cut from the same cloth; even the less good games tended to ooze charisma. 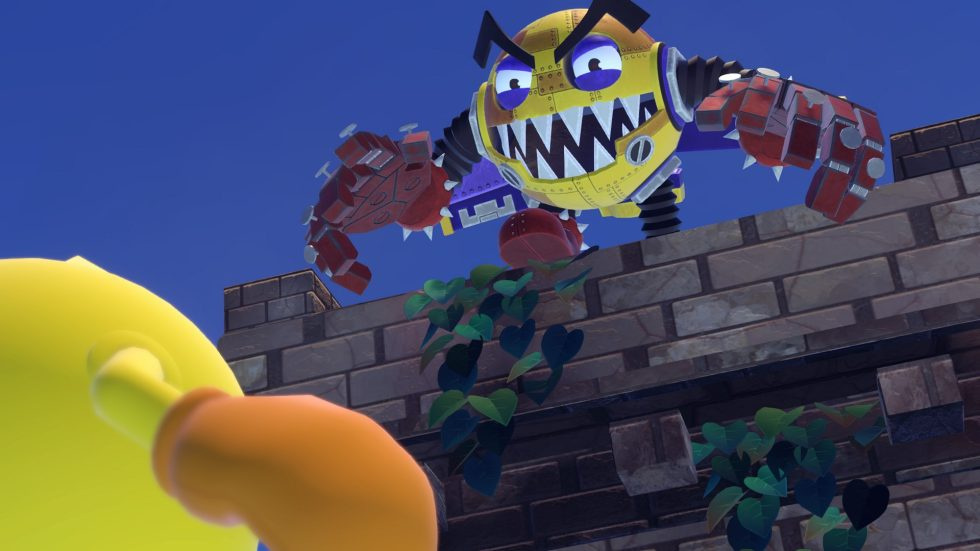 Pac-Man World combines several ideas, from the importance of collectibles, light combat, small puzzles, and development that is not limited to 3D. That is to say, unlike Klonoa – also recently remastered – which plays with the camera but is much more classic and 2D in gameplay, in Pac-Man World Re-Pac, a large part of the route is linear. Still, we are not locked in a plane, and sometimes there are combat arenas where you can explore or defeat enemies. This freedom of movement plays against him at times when jumps require precision – which, luckily, there are not many – but it also opens up new possibilities for an adventure where we must make use of some skills, such as running and jumping on the head of the enemies, in addition to giving rise to filling the stage with fruits, letters of the word PACMAN and the famous power pills, which for a few seconds allow us to swallow the ghosts. On many occasions, progress asks us to press a button hidden behind a door that needs some object in the area, interact with mobile platforms and trampolines, swims or eat a pill that makes us metallic, immune to damage and heavy under Water. A cocktail that made Pac-Man World a fun game and a bit original as far as it goes. Its gameplay has several positives that keep it fresh more than 20 years later. The camera is fixed, so we don’t have to fight with a perspective that, on too many occasions, ruined other platforms. The stages encourage replayability for their points and collectibles. You can even change the order of the phases to change the environment or skip one that chokes you – which is unlikely. Control isn’t always fine – partly because of that third dimension – but it’s not a game designed for fast action, and they can be forgiven. Lastly, the graphics were pretty nice for the time, and although it’s a refreshed look with the remake, the base was already good. Ultimately, Pac-Man World was a competent platformer and above average compared to other platforms from the 90s. 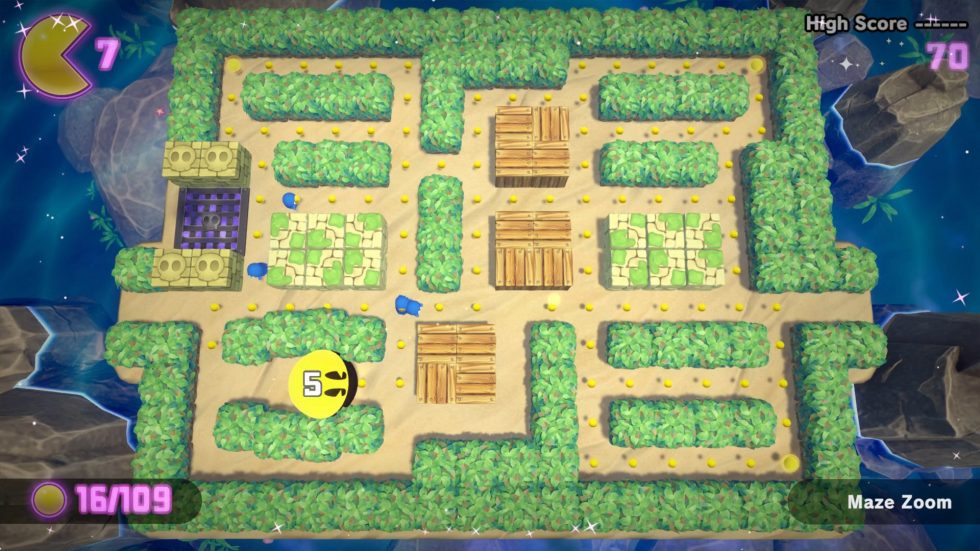 Although the new graphics are the most important innovation, Pac-Man World Re-Pac has taken the opportunity to make small changes to improve the experience. One has been mentioned during the game’s promotion, and now by taking a power pill, our protagonist grows to an enormous size and can destroy objects on the stage or even discover secret rooms. Regular pills can also be used as projectiles, a consumable that adds another attack, some button or decoration changes position, balances are made in the difficulty of bosses, and there is an easy mode option.

Regarding the graphics, Re-Pac does not reach the level seen in the Crash Bandicoot or Spyro collections, but it is not a game that asks for much more. It maintains the style of 32 bits, and let’s say that it updates it to what would be 128 bits in high resolution and 60 images per second. We have played it on Nintendo Switch, and we strongly recommend changing the default option, which favours image quality, to the performance option, which is much more fluid without too much cost.

The video sequences have also been updated, there are new scenes, and the ending is slightly modified. However, the most nostalgic will notice that, for some reason, now the game has an invented language for the voices that gave him a personality that is now lost. 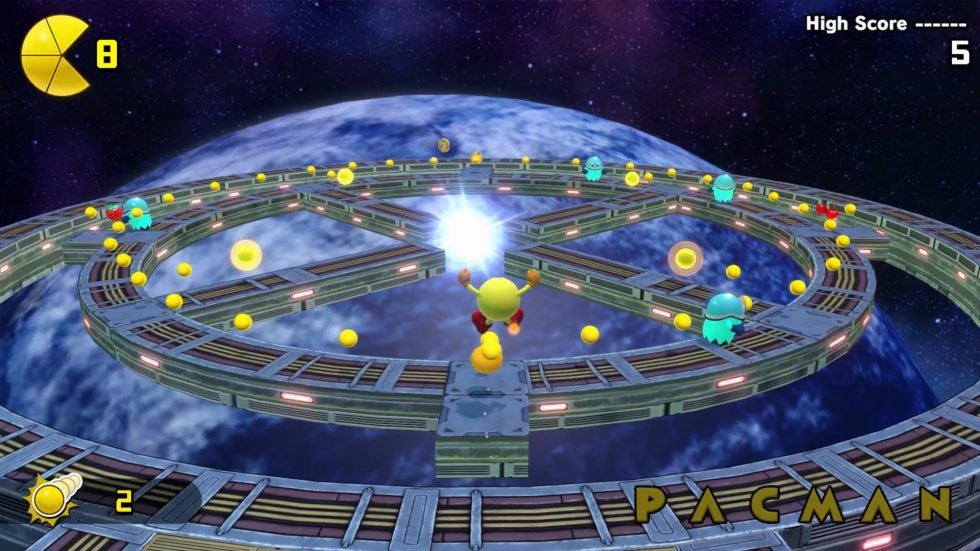 Indeed, Pac-Man World Re-Pac is not as ambitious as other remakes. The proof is that it could include remasters of Pac-Man World 2 and 3 – which would help expand the content because it can be finished in less than five hours-. However, if you are nostalgic for a classic that still amuses you, or you were left with the desire at the time, the good news is that it has not lost its ability to entertain and maintains an undeniable charm. Re-Pac polishes the gameplay, the graphics respect the original art, and it prevents it from falling into oblivion. For that alone, it is well worth it.

We prepared this review with a digital copy of the title for the Switch version provided by Bandai Namco.