Konami continues the good trend that started a couple of years ago with a remarkable game of football, PES 2017 comes polished and improves the experience!

PES 2016 was a great game, and we had no doubt that PES 2017 will be even better. Konami improved certain aspects with Pro Evolution Soccer 2017, maintaining all the goods they achieved, and adding more to provide a soccer game even more satisfying and fun. Its only competitor, which has Electronic Arts behind it with pouring lots of money, the Pro Evolution Soccer left with fewer resources each new title, and which is more prominent than ever in PES 2017. Lack of licenses, not much upgrades regarding graphics compared to last year, and nothing new in terms of game modes. Despite all these limitations, they have focused on what is truly important in a soccer game; the gameplay. PES 2017 is more enjoyable and fun than before and is the best PES to date.

The first thing you notice when you start playing is the improvement in controls and passes which play very satisfying. The first touch when receiving the ball feels intuitive and natural. The input lag from two years ago, back when it took seconds for players to react your command, was partly solved last year, but now it has been completely fixed, controls respond perfectly. In the higher difficulties defenses close very well, pushing you to play on the wings, and if you want to get to the front area, you have to develop much more tactics, something well done and designed in this installment.

In addition to improvements in controls and passes, and animations, playing the ball is more pleasant than ever, thanks to the new ball physics something that PES failed to replicate in the previous games, this year it is finally better than ever. You can see this improvement in rebounds, controls, and passes. Also, the goalkeepers react faster to shots, they gain their grounds faster even if they fall,  and not leave dead balls in the field. Don’t they fail at times? Yes, they do, but that it also happens in real football. And referees have also been reacting correctly to the faults and take the yellow card for the right reasons, showing a better judgment compared to previous titles. 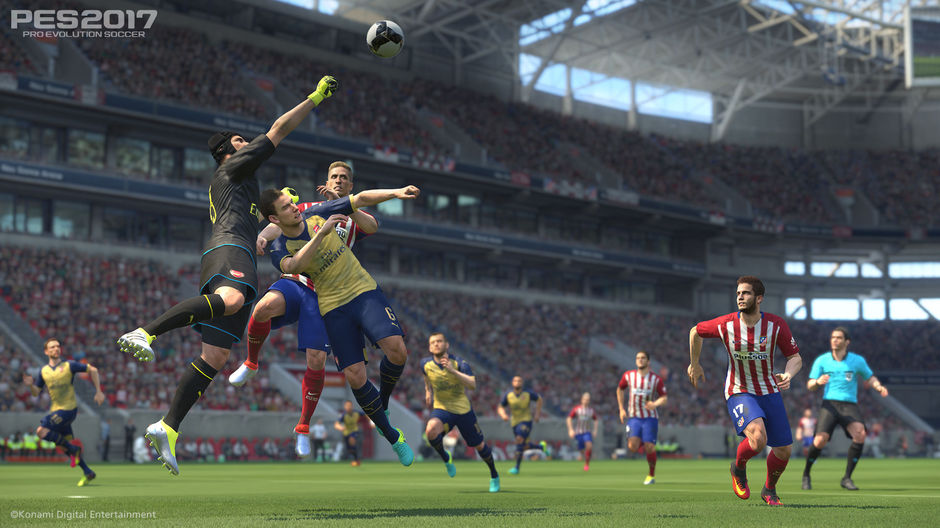 The pace of games seems almost perfect but can be modified to your taste, and as for the AI, default is so easy, if you choose to play at a higher level of difficulty you will have more fun. Playing Become a Legend mode is not so difficult. Another addition to PES 2017 is the adaptable AI that change its way of playing based on ours, and that for example if a player receives the ball a lot, they’ll be more on top of him for the rest of the game. Hoping to see this in the future of every soccer game, which makes the whole experience so much fun playing against the AI, gives the illusion that you’re playing against a real person.

The long passes have lost much of their effectiveness, and opposing defenses know how to take good care of their back, and makes it hard for us to score, pushes you to be more “original” when attacking. There is a lot improvement in passes, as well as how realistically the bodies of the players interact in the air. In general, the physical contact and the player animations have improved, but there is still room available for more, it is still possible to witness strange or unnatural movements, for example, each time you dribble, the animations are very unrealistic and still having much room for improvement.

The strategic side has also improved, and we can make series of advanced instructions during matches, pressing the attack, changing the defensive or offensive team in real time, quickly and conveniently. For those who likes to play hardcore, PES 2017 is a joy to play, because it offers an experience quite different, and challenging, but that’s what make it more realistic and satisfying, something that football lovers deserve. 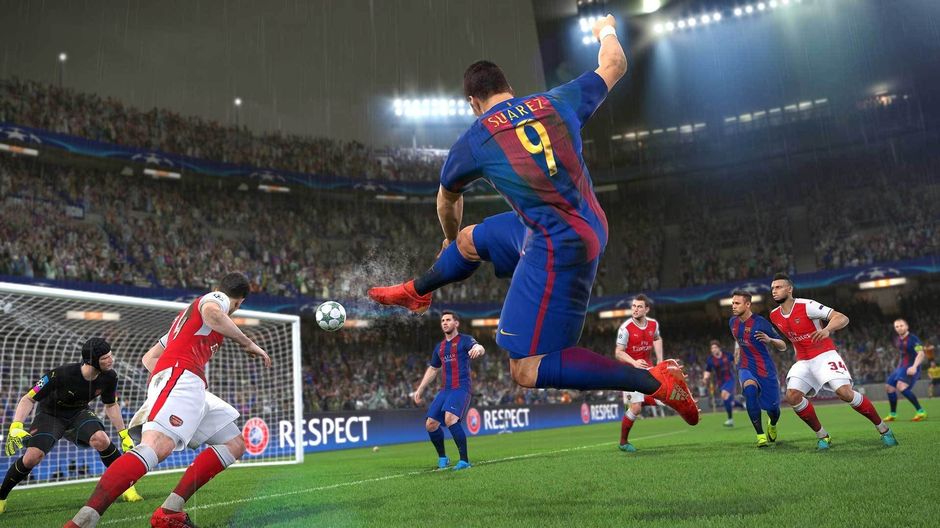 Regarding technical side, PES 2017 has been revamped, and improved and solved many of the previous issues, but on the licenses, it has not improved but has even gone backward. All licenses for Europe have lost, both leagues and their clubs, and have closed off agreements with some clubs, like FC Barcelona, Liverpool, Borussia Dortmund, Arsenal and several other clubs. What is even worse, uniforms don’t fit to original and set with other colors, which is a mess. At least the players within the teams are correct, so the only major problem is having to rename teams and put the correct uniforms. 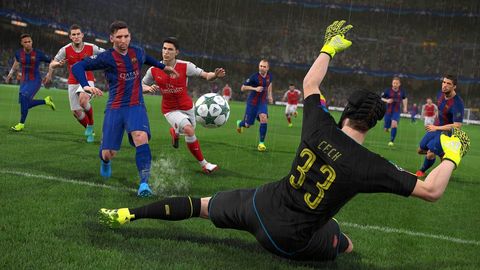 To compensate the lack of licenses, the in-game editor is more versatile than ever, if you are playing PES on PS4; it allows you to import images and data without any hassle. So in the coming days, this will only improve. Although, the Xbox One does not have this option, and you need to apply changes manually. If you are cheering for any South American football teams, then there is more reason for you to be happy, because here you find a lot of licenses, such as leagues from Argentina and Chile, and also returning licenses from championships like the UEFA Champions League or AFC. The list of stadiums has also increased, but still less than the number of real stadiums, and especially in the european region, there are only five to pick from, they will add more later with a free upgrade. Then again to compensate the lack of available stadiums, the editing options give us more than enough freedom to create one to our liking.

The game modes are the same as last year and include some minor improvements to existing ones. Besides being able to play different types of leagues and championships, we have the classic Master League, the popular single player mode, which remains same, along with a few tweaks. The transfer system is more flexible, allowing assignments for six months. Also, they have added contracts that are available for a limited time, to add more excitement, and the system of progression has improved, and skills can be acquired and learned to play in new positions. The other popular mode is Become a Legend, in which we live the career of a footballer only, either created from scratch or by choosing a real player. Following the experience for a player, and create your own MyClub from scratch to face the AI and other players, makes to whole experience connected and more competitive. MyClub was created as a rival against FIFA’s FUT draft, and has settled its personality, a unique system to get better players. Coins you earn can be spent to hire Club Managers to get us the best players; you can pick friendly as well as tournaments. 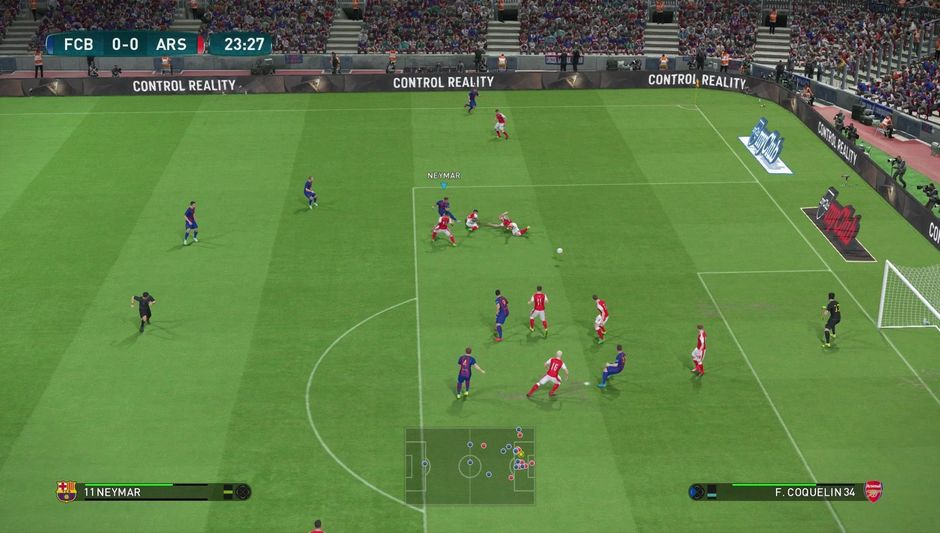 Online games in PES 2017, feels like bliss. In previous editions, the first few days and even weeks playing online were a mess, which is something become a norm with this series. But this time the PES 2017 online works perfectly, an experience without any lag. Which of course depend on many factors, your connection as well as your opponents, but based on experience it is pretty smooth, and we’ve had a great time. Playing against AI feels natural and fun, and against other users are even more fun, there is no game breaking bugs to score easy goals, and we had very good matches. Online have Quickplay,  you can create your lobby, where we can choose different settings and play against our friends, Hall of Fame, champions league, online divisions are the modes to pick from.

The graphics are purely aesthetic and animations, as in menus, display interface and everything surrounding the game, seems quite dated. But textures in general, field quality, many of character animations, everything else is much improved, and we hardly noticed any major changes compared to last year, even the graphics are improved they are still behind today’s standard. The lighting is good, and animations are linked to each other fluidly but remain somewhat robotic and unrealistic in certain situations. Famous football players look like the real ones, but because of the skin textures not that detailed, their faces look like wax dolls. The game runs at 60fps , which is desired in a sports game like this, and very stable, there are no technical problems, offers a very clean and sharp image that allows you to enjoy the games without any problem.  Famous players characteristics is well captured such as the way they run, hit, control or drive the ball, something that PES’s ultimate rival should learn. Also, some transitions between plays well imitate the real life. The soundtrack is limited than ever , as they were short on funds to license. 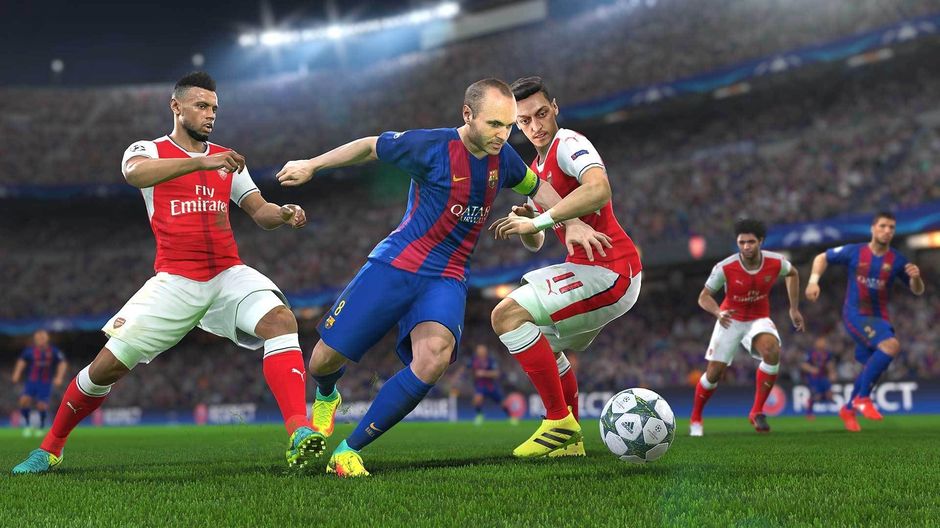 Pro Evolution Soccer 2017 have been totally focused on improving the gameplay , something they have certainly achieved. Not in a remarkable way, do not expect a giant leap from what was offered last year, but it is undeniably better. They have improved and polished all those aspects that did not fully work well at all, resulting in a very enjoyable and fun game, definitely recommended to any football lover!