Samurai Shodown II. Perhaps the term that best describes it is “pure arcade”, and is that taking into account what it is capable of offering the player, what less than giving it a qualifier like this. So are we facing a perfect game? Despite being the player who has the last word, we must analyze each of its aspects, being able to anticipate that it has an unbeatable technical section (graphic and sound), and almost perfect gameplay. However, we will find some details that could have been polished and that in fact, they were tried to improve in successive sequels, with greater or lesser success.

What we cannot deny is that it has the ability to enchant us once we have tried it, because it is one of those few video games which after those first moments, its combats remain anchored in our mind and come to us again and again during our day. a day. “What would happen if I choose this fighter? Can I improve if I perform this technique? …” are just some of the thoughts that we will surely have.


The plot places us in a feudal Japan which has just rid itself of the threat of Amakusa, appearing a new evil being. In this case, it is a femme fatale named Mizuki, who has set out to dominate the country thanks to the dominance of the dark forces. As happened in the first part, only a very select group of fighters will undertake a journey in order to defeat such a fearsome being.

It is superb in terms of graphics, since as in the first part, the designers have tried to reproduce both the costumes of the characters, their movements, etc., as well as the scenarios and the atmosphere in general that we could find in it, was feudal. Starting with the sprites, these have been worked on down to the smallest detail in order to offer us a visual spectacle of both design and movements.

The animations are spectacular and have a fluidity that surprises even today. Numerous frames have been included to create these movements, and an attempt has been made to accurately reproduce the true attack or defence movements of a multitude of styles of martial arts with weapons. The magic on the other hand, although it obviously does not follow that realism that the movements have, they have been designed so that they do not clash in such a setting, and in general, although they are spectacular, they have not fallen into excess. 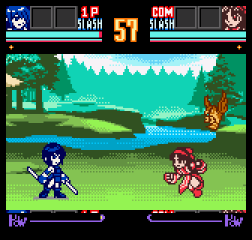 The settings are another of the strong points, which also offer that medieval setting. We will be able to fight in places as varied as a temple, a cliff or a forest, and in all of them the good use of color stands out, which makes it have a very colourful finish, despite that, we sometimes fight in conditions of gloom. But even taking that into account, we will not remember it for having dark scenarios, as it happens with other games, like KOF ’99.

Effects and animations will be the order of the day, showing scenes full of life, thanks to the simulation of effects of light or fog, movement of the waves, the public, and a long etcetera. Everything in conjunction makes it have an exquisite graphic finish, reaching a bar that few have reached.

Unfortunately, the musical section does not accompany the graphic finish in such a masterful way. The melodies that we will be able to hear during the combats are mostly relaxed, and they do not have any catchiness except for a few, such as the Nakoruru theme. The rest, which is equivalent to the majority, will consist of melodies lacking in a good rhythm that will accompany the combats through the simulation of musical instruments that evoke an oriental feudal setting, although with a too “peaceful” background that does not fit with the bloody combats that are carried out. 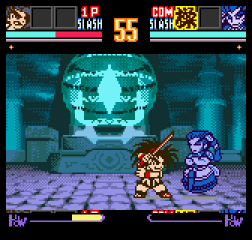 The sound effects that yes, are very successful, such as the clash of metal with metal, the sound of the blade cutting meat, or those corresponding to magic. The voices deserve special mention, with an exquisite work by the dubbing actors, giving each character their own personality that they tried to maintain during the rest of the installments.

First of all, note that Samurai Shodown II offers us the possibility of selecting very charismatic fighters who will have their own story within the game: Galford, Haohmaru, Cham Cham, Nakoruru, Genjuro … The gameplay is typical of the old school is say, pure arcade. Simple, direct and without too many complications in terms of controls.

The gameplay follows the basis that the successful first part left us. Despite not surprising as much as the previous title, such depth has been achieved that it really takes many games to master it properly, and we are not referring to difficult joystick movements or button combinations, but simple movements that we can take advantage of to win easily. We have relatively few hitting movements, and we have the ability to roll, dodge, run, etc., allowing us to carry out an endless number of different strategies with which to face the adventure again and again. This feature is something that not all fighting games have, and it was a great success on the part of SNK, a great qualitative leap within the saga.

The so-called “Ikari meter” is added, a rage bar, something new in this sequel. This bar will fill up as we hit the enemy and even block attacks, and when we have it to the maximum, we can make more powerful attacks, as well as execute special attacks or Deathblows, all of them devastating, and visually quite spectacular. These techniques are far from the general realism that the game offers us, but without a doubt, they are an addition that adds a lot of fun to a title that is already quite complete.

The difficulty is definitely high, although it does not reach the limits reached in the first part. It should also be noted that the AI ​​of the rivals nowadays feels somewhat outdated since on many occasions we can defeat them by carrying out certain attacks in the form of a loop, movements that we can repeat over and over again. But if Samurai Shodown has a downside, it is without a doubt the lack of balance between characters. In this case, some like Cham Cham or Ukyo are examples of this, since they are very powerful characters compared to the rest.

Being one of the most legendary titles in the entire Neo Geo catalogue, we have before us a sequel that definitely laid the foundations of the franchise, although for many it would be lost after the appearance of Samurai Shodown III, and that in a way it would try to recover in Samurai Shodown IV.

Samurai Shodown II has a lot to offer, that is, charismatic fighters, high difficulty and some controls and moveset that allow us to pass the game in different ways, always enjoying some realistic and bloody combat. We will go to it often, as it summarizes everything that a good traditional arcade should have. Essential on our Nintendo Switch.

First unboxing of the DualSense, the PS5 controller
October 23, 2020