South Park comes back with an amusing adventure of role-playing, and yes it is as good as the first one, that includes all the dirty jokes too.

In 2014 South Park, the famous animated TV series turned 20 years, and thanks to Ubisoft we were lucky to enjoy South Park: The Stick of Truth on our PC and consoles. A simply great role-playing adventure that perfectly recreated the whole spirit of the television show, with its creators Trey Parker and Matt Stone fully involved and the veteran studio Obsidian developed a game that is full of hits and charm. One of the best adaptations of a video game that has ever been made of a TV series or a movie and that left an unforgettable experience to all those who played it.


Now comes its sequel, South Park: The Fractured But Whole, which although developed by a different studio, Ubisoft San Francisco, has managed to keep everything good thing from the first game and presents us another fun adventure role-playing game in the South Park Universe. A game that will surely make you laugh constantly. Also, Ubisoft San Francisco has been able to incorporate their own ideas into the formula, bringing us a completely renewed combat system.

Like the first game, The Fractured But Whole connects perfectly with the TV series, and it’s great to see how everything that has happened in the last three years on the TV show is perfectly represented in the game, both characters and scenarios are perfectly linked to the show. 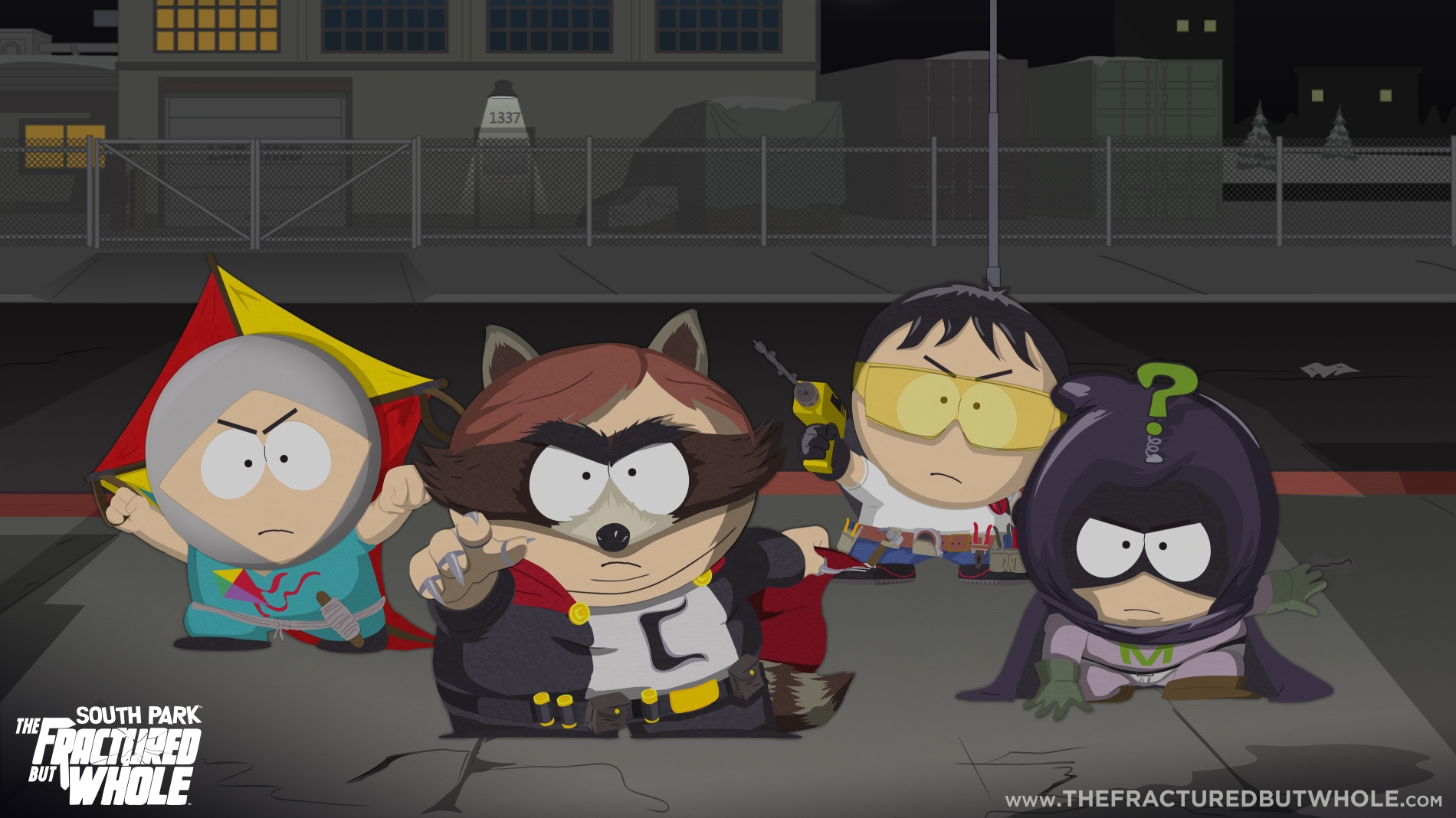 Cartman, Stan, Kyle, Kenny, Butters decide to play the superheroes, in an absurd plot in which they have to deal with scenarios such as the police corruption, and they will do trips in time and even battle against a gang of cats. The new plot context makes fun of all the Marvel and DC movies and series that have been made in recent years, as well as to include some of the recurring themes quite cleverly from the last seasons of the series, such as gender identity, police racism, political corruption and social networks.

The story, in general, is a bit weaker and less consistent at some points compared to the first game, often go from here to there without knowing the reason very well, and certain parts feel like meaningless. The problem is that South Park as a TV series would take as much as 20 minutes a chapter for a double chapter 40 minutes max, and here we have a game that offers more than 15 hours of gameplay, so it is normal not to be able to maintain the same interest and intensity throughout the whole story. But apart from the argument, the game manages to surprise you constantly with new situations, each more crazy, and the final section is simply insane.

The story and the adventure is entertaining from start to finish, we have had a great time with The Fractured But Whole. It is a pleasure to travel the streets of South Park doing side missions, solve puzzles and advance in the main plot to see what new madness will surprise us next. It is a game that makes fun about absolutely everything, something that we are not too accustomed to see in terms gaming. 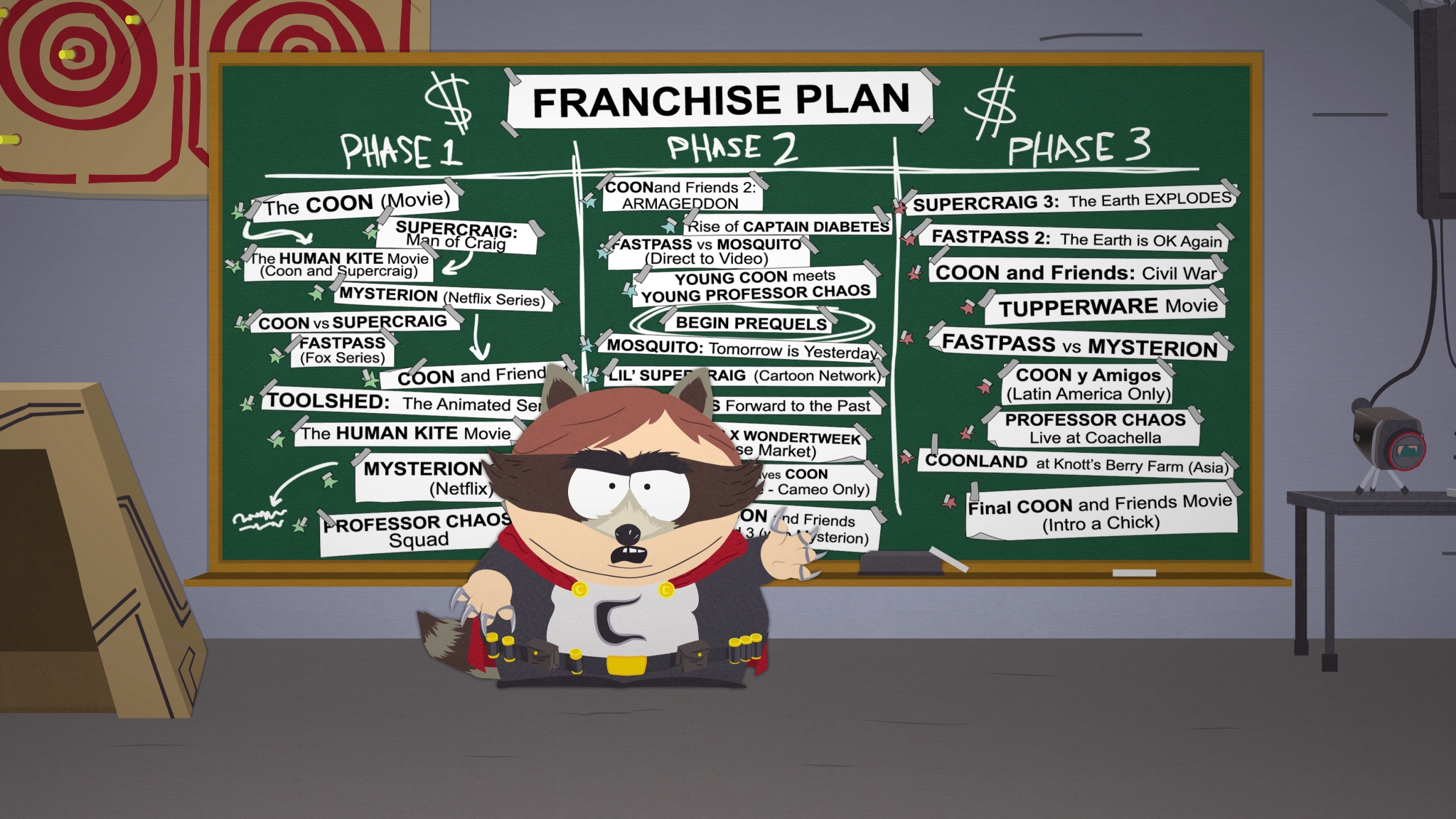 Comedy is not a very common genre in video games, especially as less irreverent and such a hoot as this, although that is what makes this adventure worthwhile and playfully fun. It offers part of exploration and puzzles, which sometimes feel like we are playing a graphic adventure, as for the new turn-based combat system is one of the biggest changes compared to the first game. 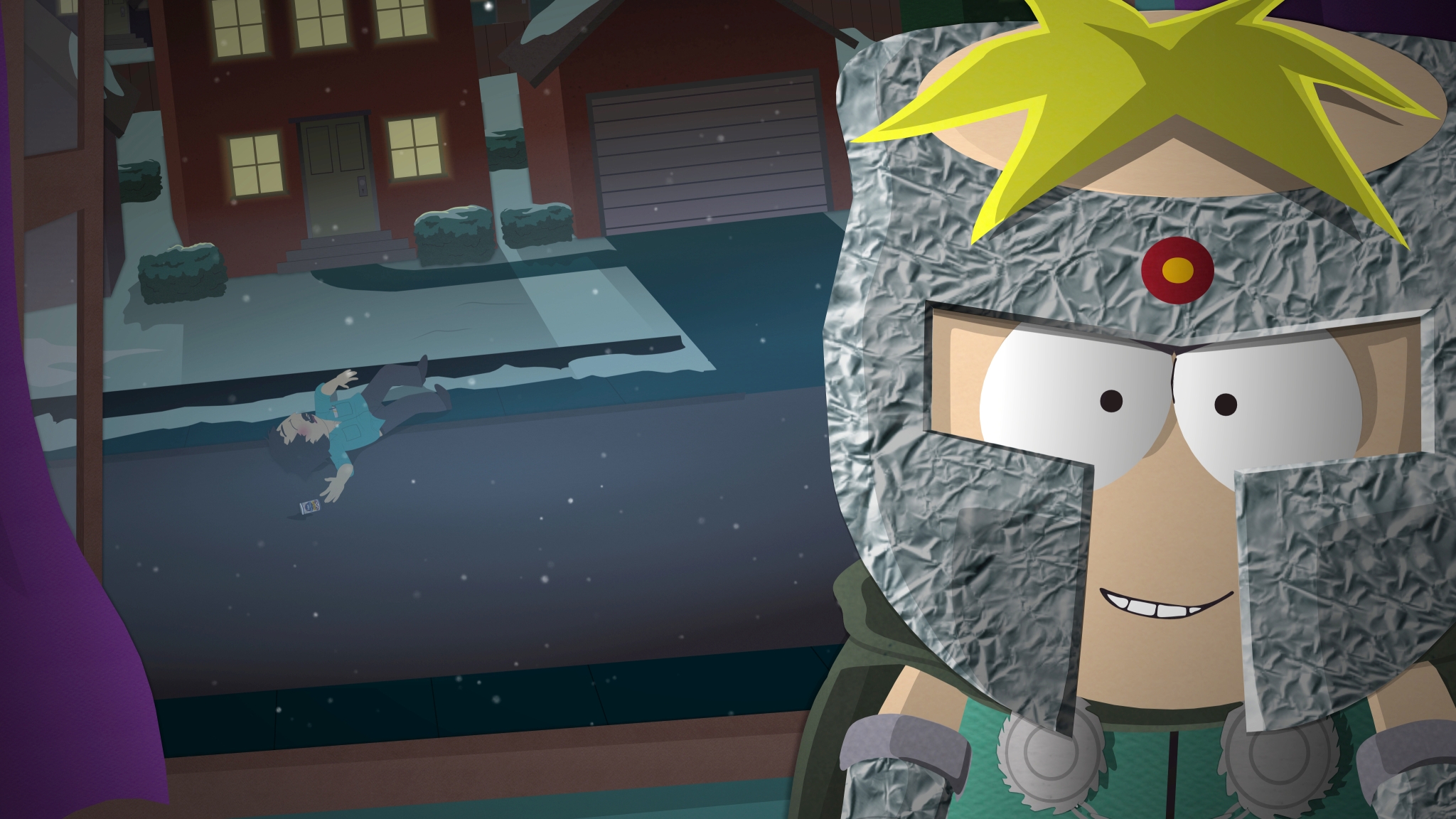 Now the fighting has added a new strategic component since we can move through the battle, the stages are divided into squares like a chessboard. The different types of attacks have more or less range, are directed in different directions, and the disposition of our characters and the enemies on stage is also very important, the appearance of objects that serve as coverages on battlefield is also strategically important, among other variants, we have to make complex decision about where you will place your characters next on the field. 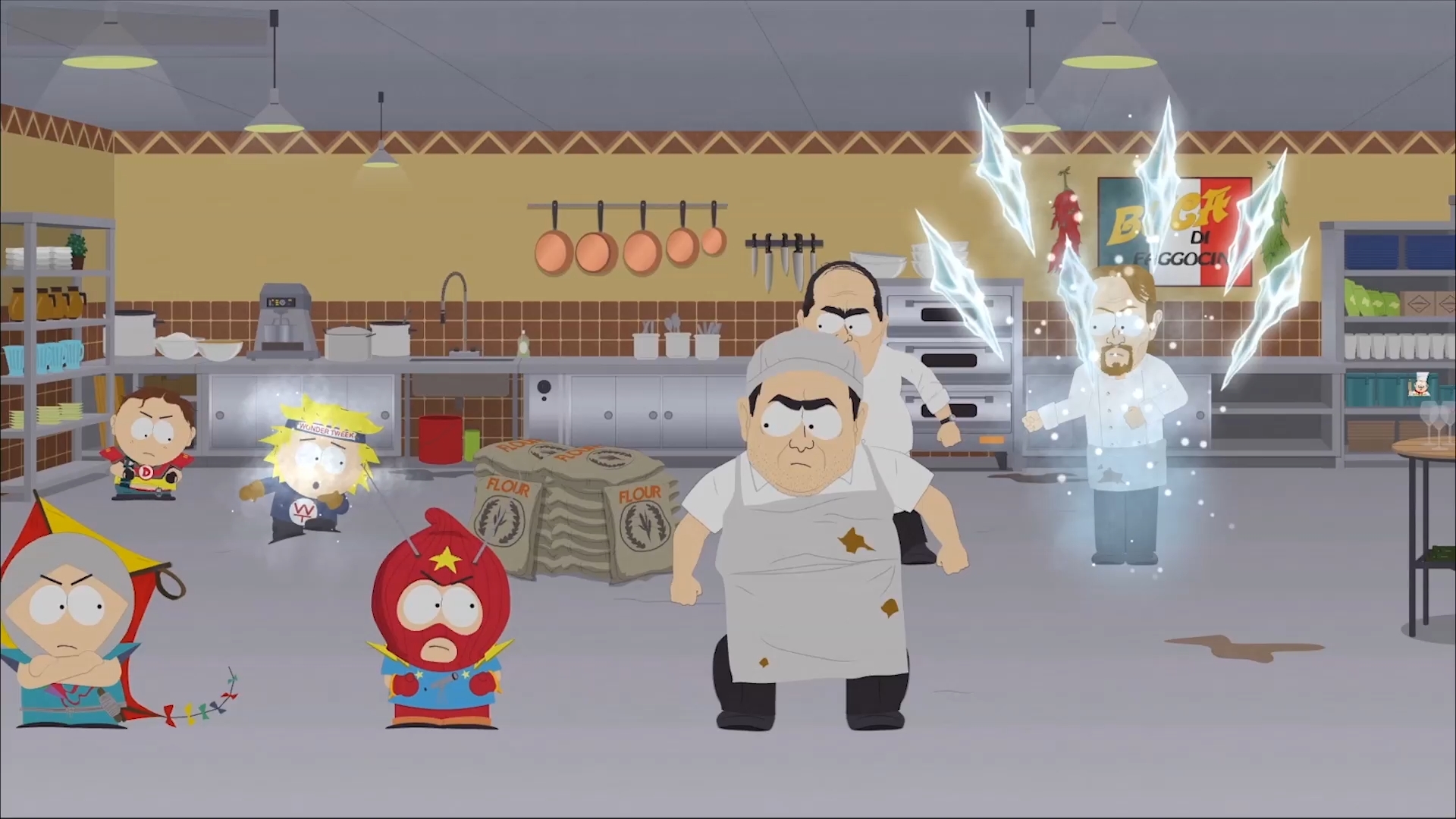 Throughout the game, we unlock different classes of character, each with their own special abilities and attacks, which we can combine with freedom, and we also have a series of devices that can be equipped to increase our power or can be used to build new creation of objects.

Apparently, the entire combat system and RPG elements are deeper and more complete. Although in the long run, the battles are substantially less satisfying than in the first, because of the rather poorly balanced difficulty. The game has seemed like a walk even playing at its highest difficulty level. 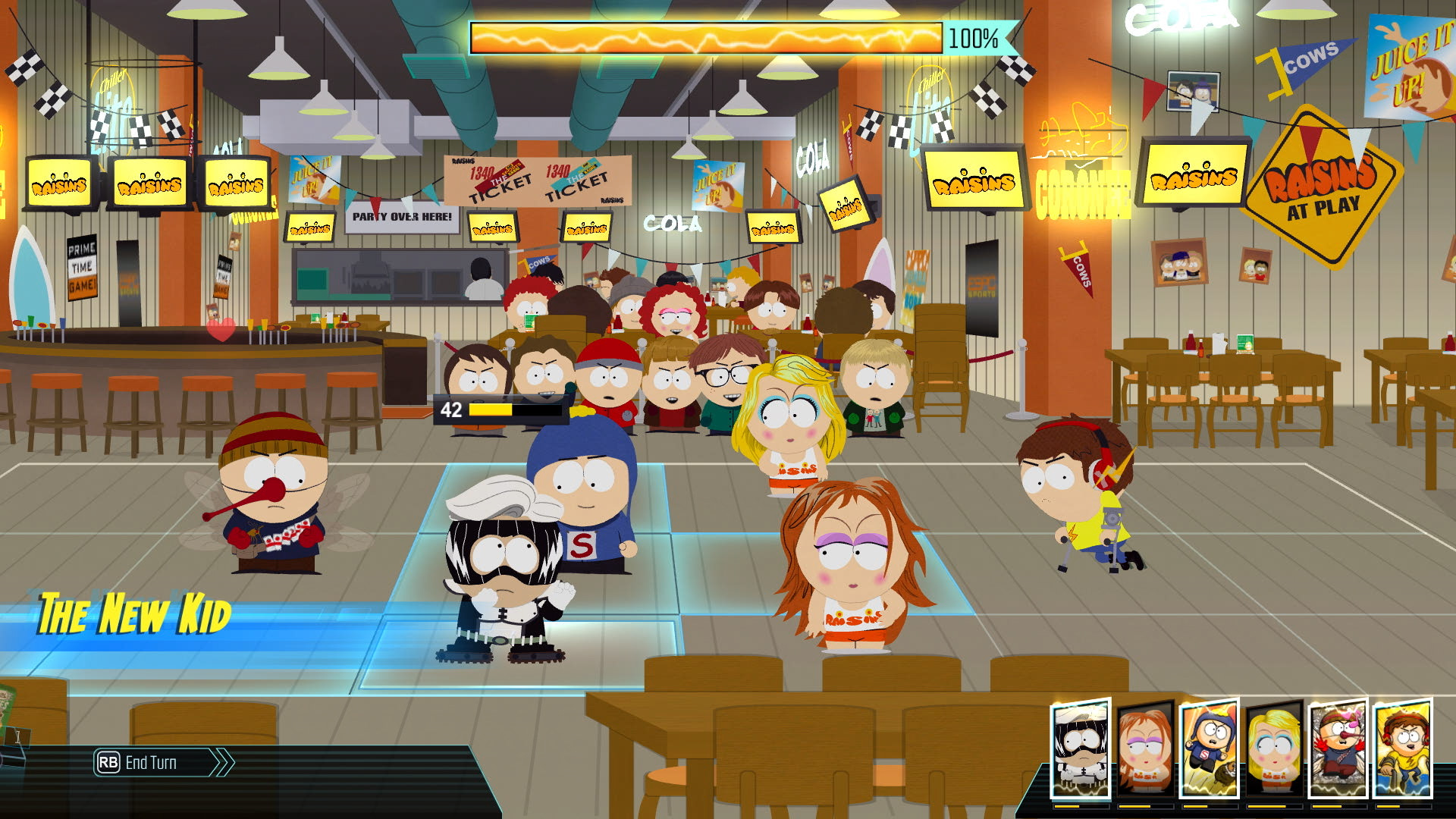 As you start, we have to create our character, and when choosing the skin color, the game warns us that our adventure will be harder if we pick a darker skin. Since it only ends up affecting the amount of money that we get during certain parts of the story. Once we start fighting the game explains that there are three levels of difficulty, that we can choose at any time. Even playing on the highest difficulty if you are a regular RPG player this game is going to feel very easy, except in a couple of section through the end of the game. 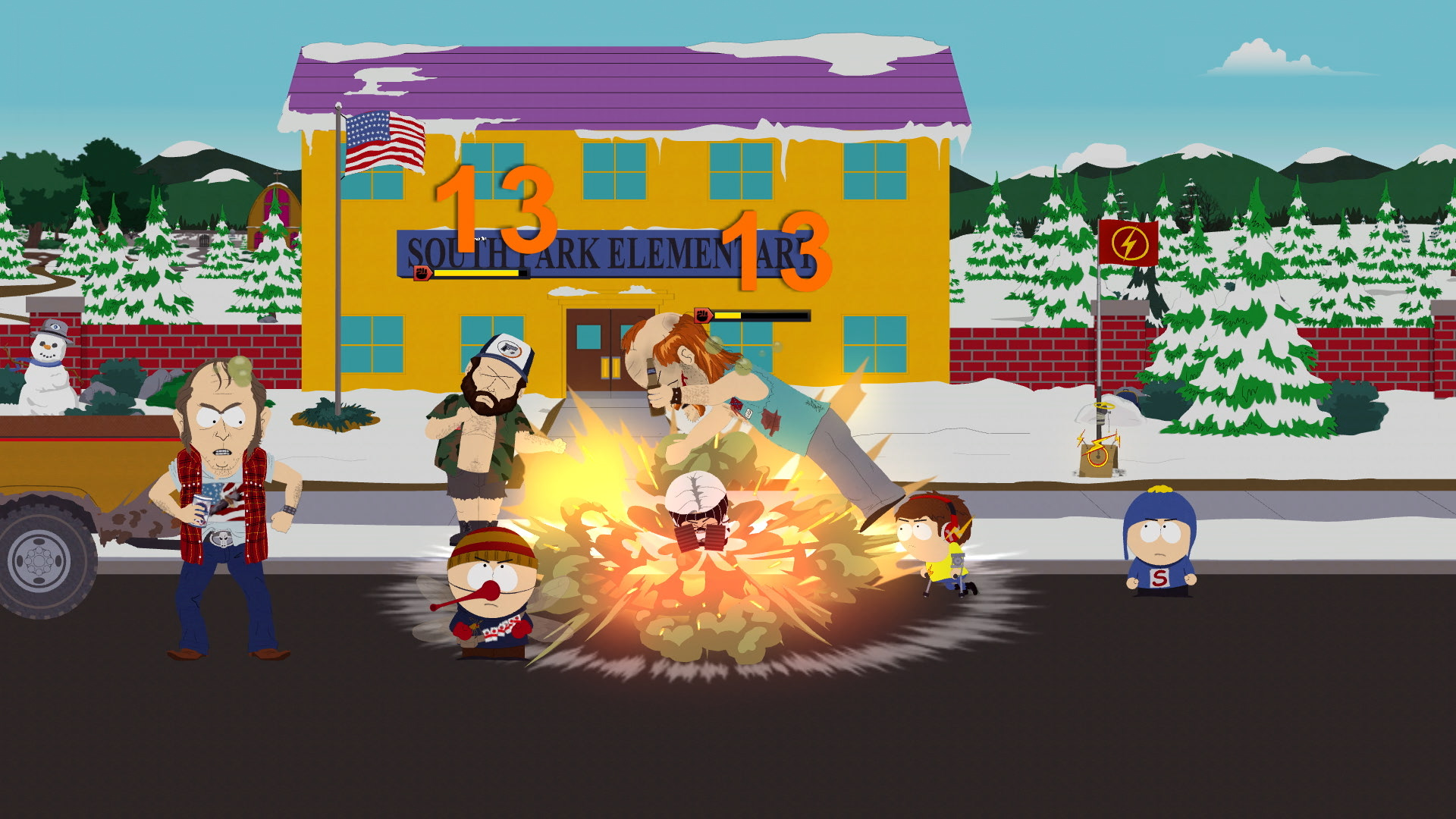 The combat of the first game was similar, very much inspired by Mario & Luigi series from Nintendo. It was very important to hit the button at the right time to attack and defend, which was quite entertaining. Now, this is almost completely gone, and to be honest many fans will miss it a little. The combat mechanics of the previous game were simpler, although Obsidian is a dev studio seasoned at creating RPG, so everything else was better calculated. Here with the sequel, it is very obvious that Ubisoft San Francisco is inexperienced with the RPG genre, who do not know how to take full advantage. 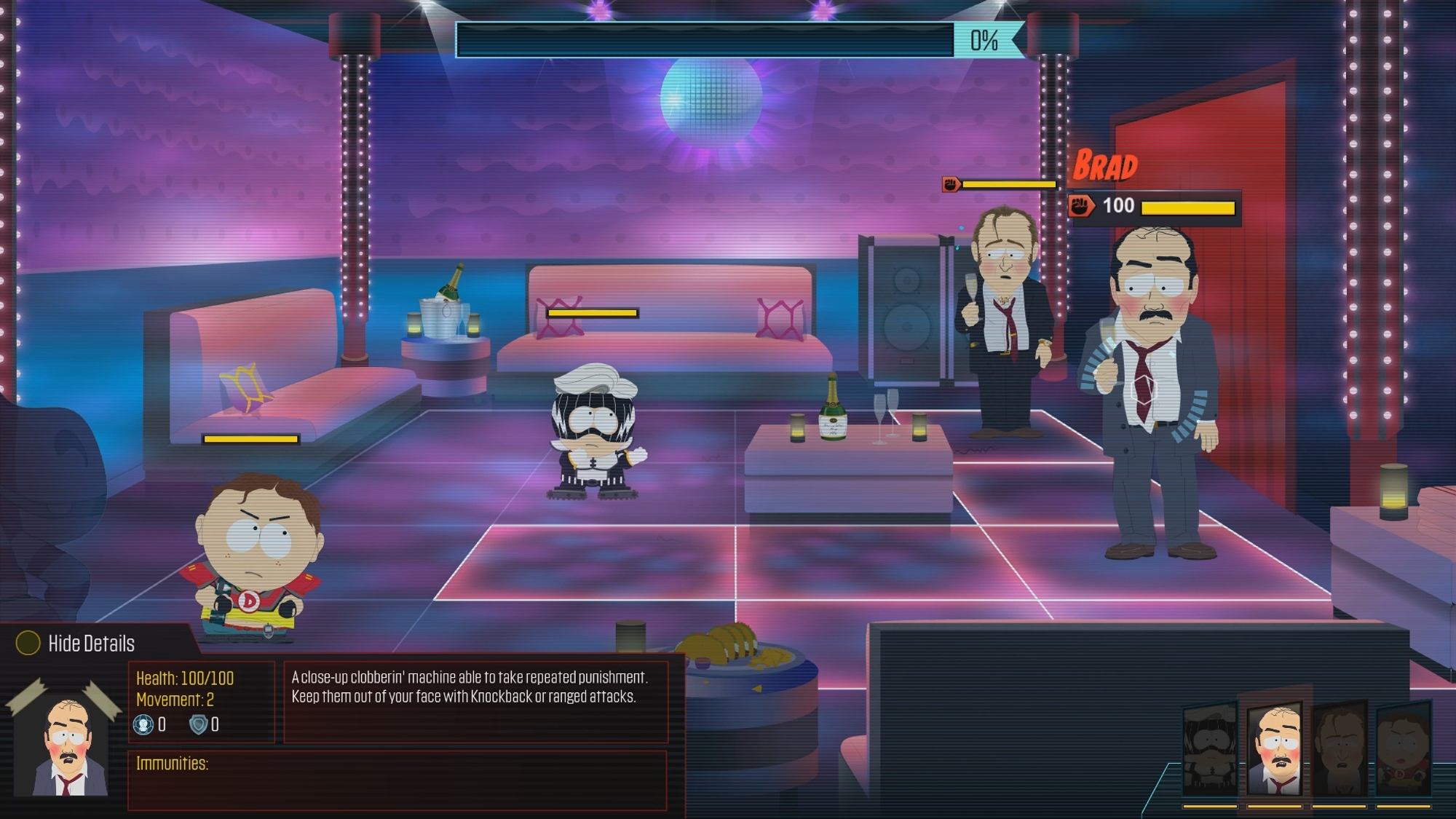 Regardless, it is still quite entertaining to engage in fights , and it is very good how they manage to include new ideas or special events as we advance in the adventure, forcing us to go and discover certain positions on the battlefield if we do not want to suffer from getting any damage, or having to push the enemies to certain spots of the combat area to be able to defeat them. 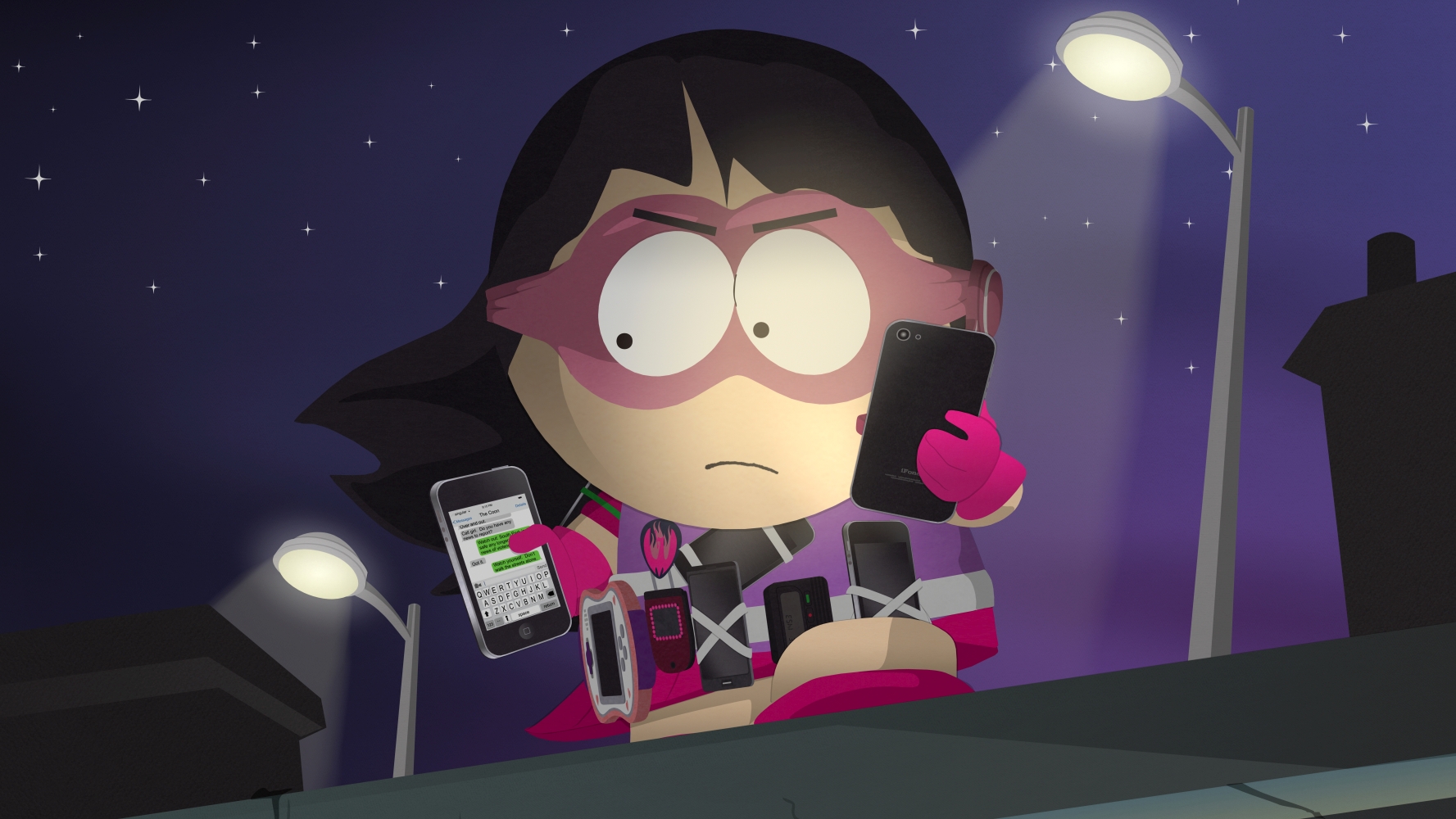 What remains a complete success is the adventurous part, the exploration, and interaction with the environment, with small and abundant puzzles, which are never too complicated, yet very entertaining. In the first hours, we will see a lot of places or objects that we cannot reach due to not having the proper ability unlocked, and we need to revisit these parts when we have it, which is very satisfying.

Discovering secrets, unlocking new missions and exploring every corner of South Park is the best of this adventure, and it’s funny how a map not too big (practically the same as the first game but with new locations) can offer so much game. 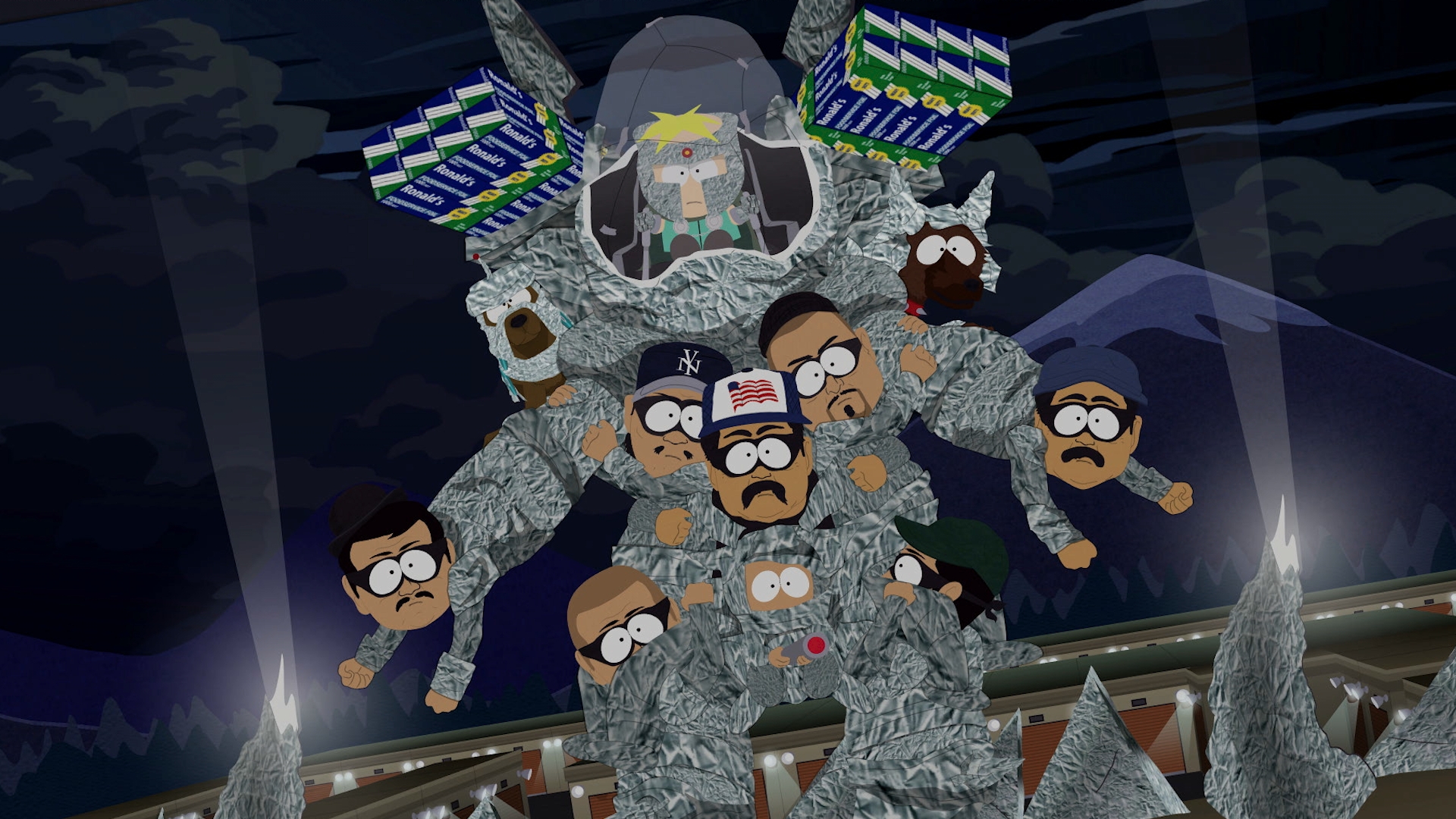 The Fractured But Whole is a little longer than The Stick of Truth, but not significantly more. It took us 20 hours to complete all missions and collectibles and achieved 90% of the trophies. A duration that may feel short for RPG fans. Maybe they should have put more emphasis on endgame, such as having couple more new missions and bosses once the main story is over. Because once you finished the game nothing new appears, other than what you would have left earlier. Of course, the Season Pass is already announced, with several DLC on the way.

Visually it’s just flawless, it can not be done any better. If the first one entertained you since it presented exactly what we see in the animation series, here it is even better done, with scenarios with more details and better animations, is a real joy. And that behind it has completely changed graphics engine (now uses the Snowdrop, the same The Division and Mario + Rabbids Kingdom Battle, and upcoming games from Ubisoft). 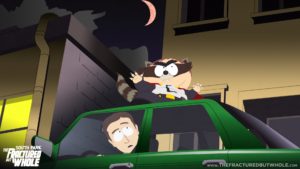 South Park: The Fractured But Whole has seemed a bit weaker than the first, in terms of losing its capacity for surprise and have a worse story built, but in any case remains a tremendously fun, and above all prepare yourself for a unique adventure. There is not a single game on the market that offers this level of entertainment, with such dirty humor, and an odd mixture of adventure and role-playing, which also has a lot of charm.

It already seemed almost a miracle that they even made the first game, so imagine this sequel, and hopefully, games like this can be viable, and we can see similar ones in the future, exclusively aimed at the adult audience. A resounding breath of fresh air. South Park series proposing something that no other title offers, and the developers deserve support and every last penny for their hard work.

We prepared this review on PS4 version of the game with a download code provided by Ubisoft.

Star Wars: Squadrons will be compatible with joysticks, HOTAS and virtual reality
June 17, 2020