Lara Croft returns with another great adventure and once again proves why she is one of the the most iconic characters in the world of video games.

Rise of the Tomb Raider, coming strong and giving fans just what you would expect from a sequel. It is inevitable to think of a game starring Lara Croft without talking about adventure, as the franchise is leading this genre for nearly two decades. Thanks to Miss Croft “The Legendary Archaeologist” whom have unraveled many mysteries, overcome deadly traps and obstacles, fight against supernatural threats and explore all kinds of tombs and ruins. In short, we experienced many great and unforgettable adventures with her.

Back in 2013 Crystal Dynamics wanted to revive our favorite adventure game through a full series of updates and changes, revealed a new Tomb Raider, away from what fans were used to, but the feedback was outstanding. A game that offers great story and full of adventure, more action than ever before.

While we face the second part of a trilogy, the truth is that this is a perfect start even if you never played the previous one, because the facts of Rise of the Tomb Raider has no relevance to previous game.

This time the story take Lara to find out what has happened about the investigation that was conducted by his father before his death: an ancient legend about a device capable of granting immortality. From here, Lara decides to embark on a new adventure to continue where his father left off.

While the story is full of the usual cliches of the genre, yet it feels much more entertaining than the first part, and much better presenting the story. Also, having fewer characters, making it easier empathize with them. 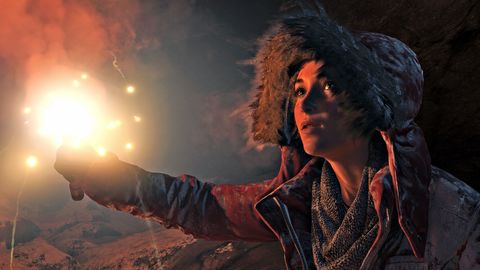 The great adventure of Lara Croft

As for the game itself, if you played your previous one you you can get a good idea of what is offered, as it follows the same gameplay foundation such as shooting behind covers, seeing in the third person, platforms, puzzles, moments measured spectacular with great scripts, gathering collectibles, a system of progression for Lara and his team and a lot of exploration for those willing to get %100 completion.

Of course, this time we find it more balanced than ever, to be precise a perfect balance between exploration, platforming and action . Compare d to previous game it has reduced the presence of the shootings to give more space for exploration and adventurous aspects.