2K presents WWE 2K Battlegrounds, a simpler and more casual game than the usual WWE 2K with a good number of game modes that will please wrestling fans of all ages.

After last year’s stumble with WWE 2K20, the first that Visual Concepts developed and offer us, WWE 2K Battlegrounds, a simpler and more carefree alternative at a price reduced title that can have wrestling lovers glued to the screen for a few hours and that, in addition, promises to offer us a large amount of post-launch content becoming a game as a service at least until the arrival of WWE 2K22.

WWE 2K Battlegrounds is a simpler title than the usual WWE 2K, betting on a more arcade formula instead of that current of simulation (within what fits) of the main saga, allowing us to do a few extra crazy things and enjoy a game shallower but pretty fun.

This carefree current is clear to us from the moment we see the first trailer or play the first game, with the different WWE stars represented as if they were some kind of collectible dolls, sometimes somewhat caricatured in an image that, is everything a success both for the arcade-style of the title and to better differentiate it from the main series. 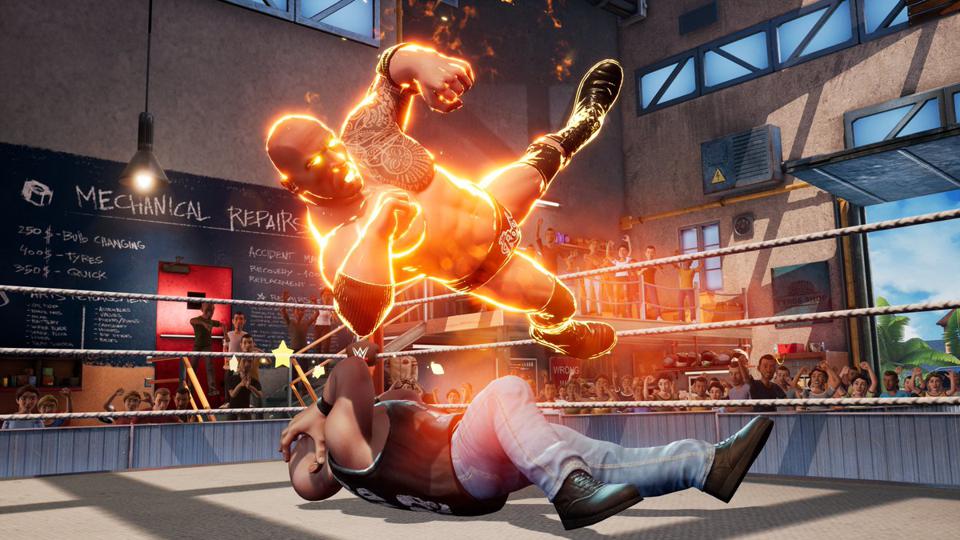 We continue to be able to perform blows, keys, throws and even special movements of our favourite stars although the number of blows and possibilities inside the ring will be less than in other deliveries, betting on faster combats that give a breath of fresh air to the franchise and that they have a good playable result.

To compensate for this simplicity in combat, what WWE 2K Battlegrounds does is give a twist to the formula, eliminating disqualifications and being able to use objects such as guitars, chairs or hammers at all times to strike our rivals. In addition, we also see twists in certain types of combats and, for example, in the typical Steel Cages, we must manage to collect a certain amount of money that appears in the ring before being able to win the combat.

Another touch is found towards exaggeration, with special movements of the Superstars that retain their essence but are more aggressive than in real life or also with some … extra elements during the combats such as an electrified cell or the possibility in one of the scenarios to throw our rivals against some crocodiles that will not take long to swallow them and take a good amount of life. In fact … we even saw a wrestler come out of the ring to grab a controller and control a mechanical chicken that started attacking us!

As we said, these WWE 2K Battlegrounds fights are less deep than in the main saga but, with the exaggeration of some movements and some special events or twists in certain types of fights this simplicity is quite well compensated and it is quite fun, especially in the time to play with our friends. Of course, the rhythm of the combats and the movements are somewhat slow, similar to those of the main series, it could be better perhaps a little more rhythm here to further accentuate that arcade combat cut that is presented with this new installment to be able to have much more crazy combats. 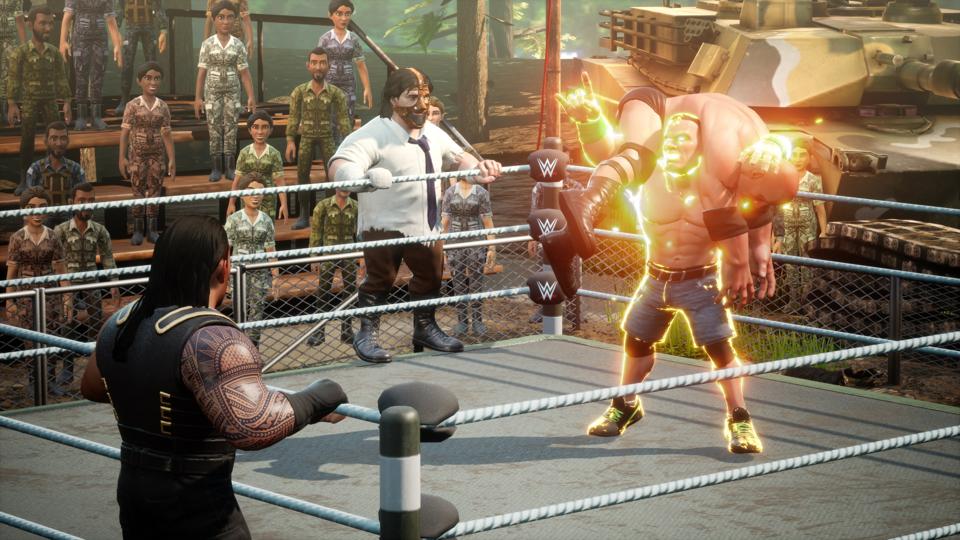 Game modes for all tastes

Something that has caught our attention in a very positive way is the number of game modes present in WWE 2K Battlegrounds as well as the future plans to add more superstars, arenas and content to a game that seems to have support at least until the release of the next installment of WWE 2K. 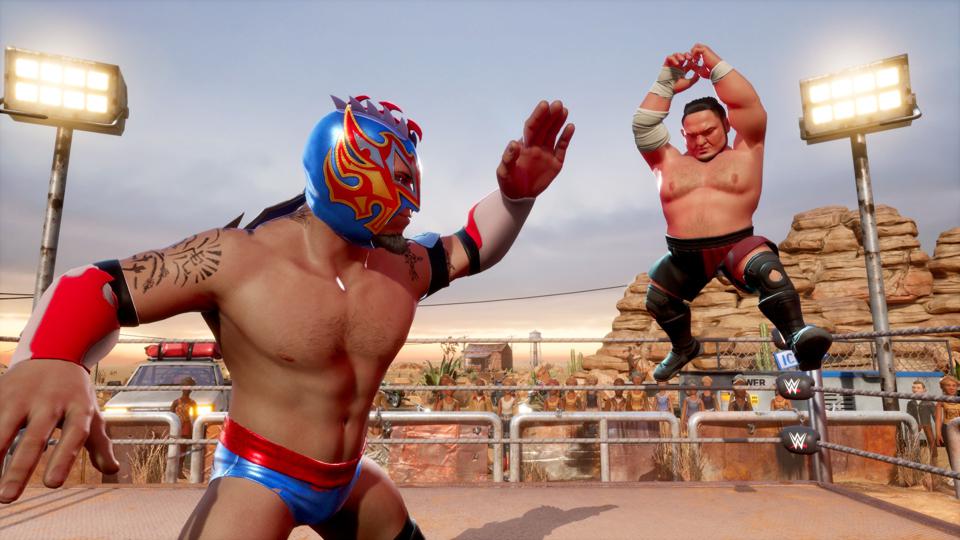 One of the highlights of this title is its campaign that will allow us to control different fighters until now unknown to play all kinds of fights around the world in the most picturesque settings. This campaign is going to give us a few hours of fun and in it, we are going to see some of the iconic protagonists of WWE although we would have appreciated a little more effort at the narrative level in it. In addition, through the campaign, we will be unlocking content for the rest of the game as new power-ups for all fighters. 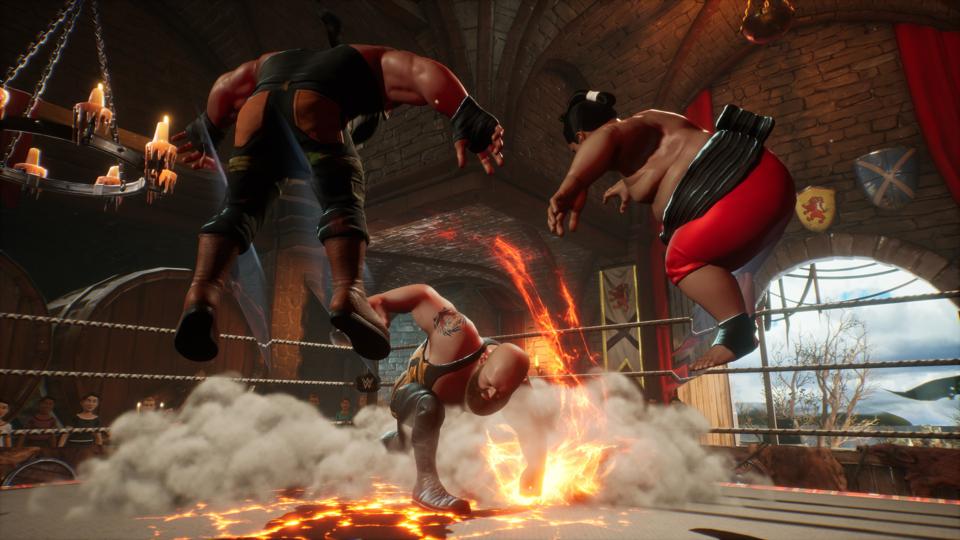 In addition to this, we also have custom battles in which to fight in Battle Royal, Fatal 4 Way modes and other types of classic matches from the WWE Universe as well as a complete character creator, online battles and a challenge mode in which we can create our own. Superstar to play different battles and upload their characteristics, although, yes, this mode is somewhat decaffeinated since it simply offers us battles and not a new story or plot for our superstar, something that we would have appreciated.

Regarding the economic model of the game, there is part of the content that is blocked from launch and that we will have to get through coins that we will earn playing WWE 2K Battlegrounds itself (there is also a payment currency), something that will also happen with stars that they will come in the future. Despite the fact that everything can be achieved by playing (although paying saves time), it would have been nice if at least all the superstars were available to all players out of the box. 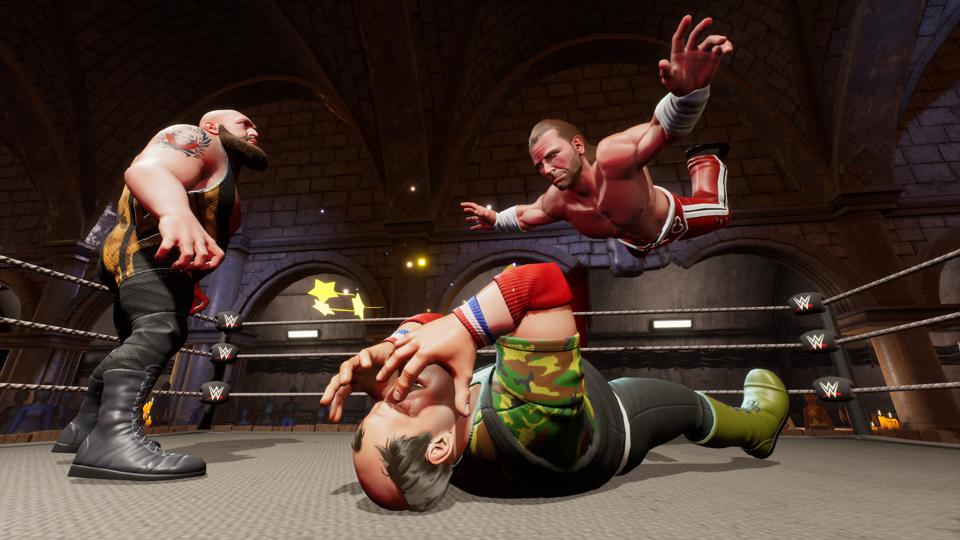 WWE 2K Battlegrounds uses the Unreal Engine and on fairly simple graphics that match quite well to its arcade aesthetic, the animations are quite good, the scenarios are quite imaginative and well represented but there are minor issues such as ring ropes clipping through a fighter or some somewhat strange collisions. They are not serious, they do not affect the gameplay ar all. As for the sound, you will find different typical WWE songs as well as all kinds of voices. Nothing groundbreaking but it fully complies with everything that this title offers us. 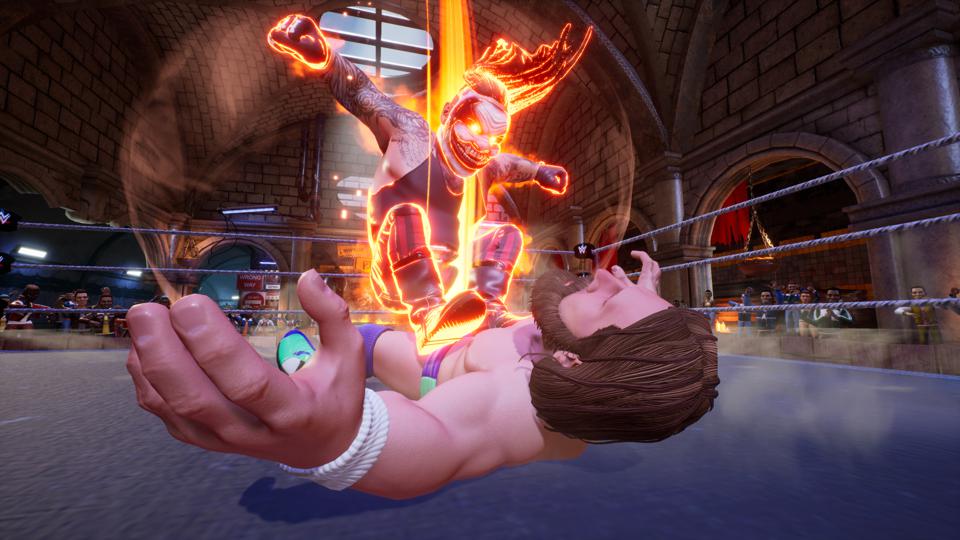 WWE 2K Battlegrounds is a wrestling game with a more arcade flavour than the previous WWE 2K, an alternative title somewhat simple but quite effective and fun for what it proposes and it has every bit to please fans of the WWE universe from all ages!

We prepared this review with a digital review code for the PS4 Pro version of the title provided by 2K.