In Dark Souls II learning curve is easier comparing to previous games,  but finding your way to locations remain deliberately confusing, with many alternative paths, nonlinear design, optional rooms with treasures and ambushes. Sad to say -for competition- because almost strictly follows the opposite direction to most blockbusters you can find today, those games that merely hold your hand from start to finish.

Something we like comparing Soul earlier this chapter is that the saga has reduced those traps playing with design flaws to damage the player by surprise, without giving option to prevent death in the first attempt; no one could predict the appearance of a dragon spitting fire or fall of a rolling stone in certain situations in the past. Dark Souls II really continue to find many guards hiding behind corners, arrows in the dark, tempting baits prepared for piquemos, deputy heads of enormous power or hinder your progress, but they warn you some type of advance. So the sound, but the music -of similar to Dark Souls- style is so important in the game; if you hear steps behind you breathing or chances are you’re about to get a stab.

Souls are the currency to purchase products, improve team and evolution; that is, it becomes the most important game in them is going the literally life. The priority is based on collecting these spirits Killing enemies or collect some items that guardan- and keep them until the next fire, because the moment of our death, which will inevitably, lose all the souls in the place of death and be obliged get to that point to recover from the previous game. It is the constant sense of risk and reward to which we are more than accustomed to the Soul and always pushes us forward a little more, to be more alert with each new area we discovered. Death does not strip your work for hours, telling you that you are more careful next time or you will regret, and gives you a second chance for the solutions. 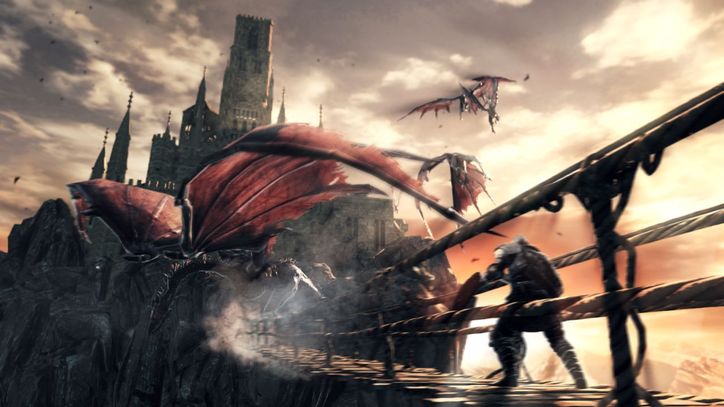 There is sufficient support for the novices-skilled players not too frustrated, or do not go two minutes of play; if you want to level up above the average of supplies or charge you healing items you can do it again and again repeating an area near the fire pit area. Of course, it will take quite some time to make up your mistakes parameters and further rise in Dark Souls II most enemies only reappear a number of times, the affordable primed with rivals over. It is the highest price we must pay if we do not wish, or can not, play with more caution. What we have noticed is that the stones of vitality that drop the enemies are quite numerous this time not so much as in past demos and betas-, but is an aid relative, because its use leaves us vulnerable for a moment in which helpless and walked slowly recovering health-that is, they are for use in times of breath, almost never in the heat of a combat-. A miscalculation may be the case of using a stone die before you fill full effect, lose all souls and passing the spent gem.