Entertaining, though shallow fighting game with characters from Dengeki Bunko and Sega.

Fight fans and anime are in luck. After the release in the West of J-Stars Victory VS + , a tournament between characters published by Shonen Jump, now comes Dengeki Bunko Fighting Climax , focused as you can tell by the title characters of Dengeki Bunko and why not ? – Sega , although playable fighters talking about the two brands are not equally represented.

A quick look at the template shows what could be one of the weak points of this game against J-Stars, it is that the faces are far less known than those offered in the tournament Goku, Naruto and Luffy among others . Are: Asuna (Sword Art Online), Kirino Kosaka (Oreimo) Kirito (Sword Art Online) Kuroyukihime (Accel World), Mikoto Misaka (A Certain Magical Index / A Certain Scientific Railgun), Miyuki Shiba (The Irregular at Magic High School), Rentaro Satomi (Black Bullet), Shana (Shakugan no Shana), Shizuo Heiwajima (Durarara !!), Aisaka Taiga (Toradora!), Minato Tomoka (Ro-Kyu-Bu!), Yukina Himeragi (Strike the Blooda) to which must be added two of Sega : Akira (Virtua Fighter) and Selvaria (Valkyria Chronicles).

Perhaps the most popular are, for the original source and recent Namco Bandai games, those from Sword Art Online. A total of 14 characters that we would have liked a greater presence of Sega , mainly to give more a more recognizable personality out Japan and to avoid the impression of some fairly generic designs escolares- especially in girls, criticism that is not really going for this game, of course, but the characters chosen. Although not a major problem as a fighting game is good or bad does not depend directly on whether these credits are successful, it is true that one of the strengths of this crossover is greatly reduced in the West. 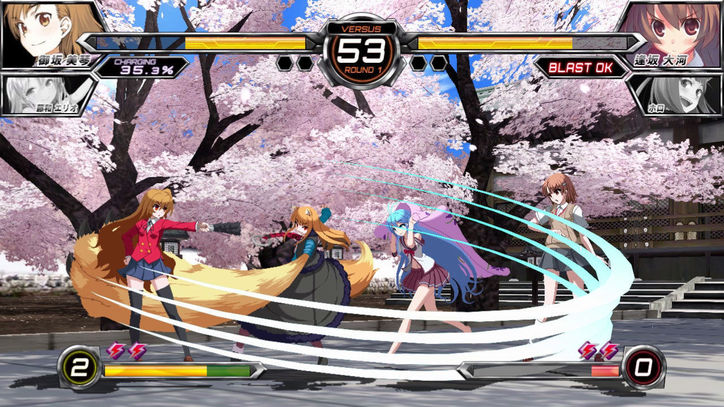 Characters are well designed in Dengeki Bunko. Love this type of art!

In return all scenarios are inspired by sagas of the publisher of those two titles mentioned others like Nights, Phantasy Star Online 2 or Virtual On, among others. While few-are colorful and three-dimensional elements, low budget game is noted at all times andinevitably find styles between landscape or our favorite Shinobi, the Sonic . However, the lack of consistency in tone and input was assured by sources with rather serious characters and other movements very humorous.

Dengeki Bunko Fighting Climax opts for a 2D gameplay that within not present anything particularly groundbreaking at least it works well and is affordable for beginners. The special moves are easily implemented and are almost the same for most characters -media and button-moon, which may disappoint fans by delving into the template -aprendido one all- learned. Nor is it a completely flat game, to give more customization have a second template character: the support. 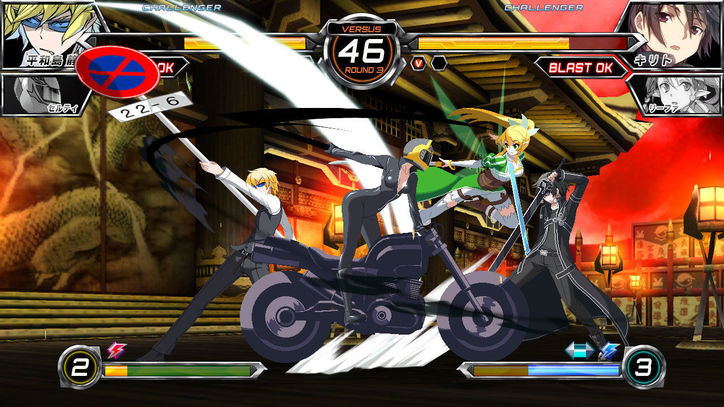 After you select a fighter who will opt companion. This is not a way for couples and are not required to use characters from a single license, meaning that of Sword Art Online Asuna could go to Pai from Virtua Fighter. The base control is simple: three attacks damage -a growing more power, more room for lentos- and invoke the wizard, which performs some action Depends ofensivo- or defensive approach, for example automatically scan through screen, shoot a projectile or the like. To prevent abuse of assistant, an indicator needs to be recharged.

A good combo always takes a good portion of the vitality of the enemy , but in Dengeki Bunko Fighting Climax use of special moves is important in the face of victory, enhanced animations and illustrations full screen. In general it is fast paced, with juggles and some aerial combat, without going to the extreme of Arcana Heart 3: Love Max.