An excellent strategy game, that will press you to think twice before executing your actions.

The strategy genre seems to be getting popular again with titles releasing such as Total War: Warhammer, Cities: Skylines. FrostPunk is a management-oriented strategy title developed by 11-bit studios, the studio that also developed the acclaimed This War of Mine; if you played it, then you can be assured that 11-bit once again delivering another quality experience.

Survival of the fittest in a totally frozen world

FrostPunk takes us to a devastated world, where climate change has left it completely frozen with extreme temperatures that can exceed 70 degrees below zero, forcing the man to evolve, to develop a new technology based on steam that uses giant generators, similar to reactors, to supply heat and keep men, women and children alive. 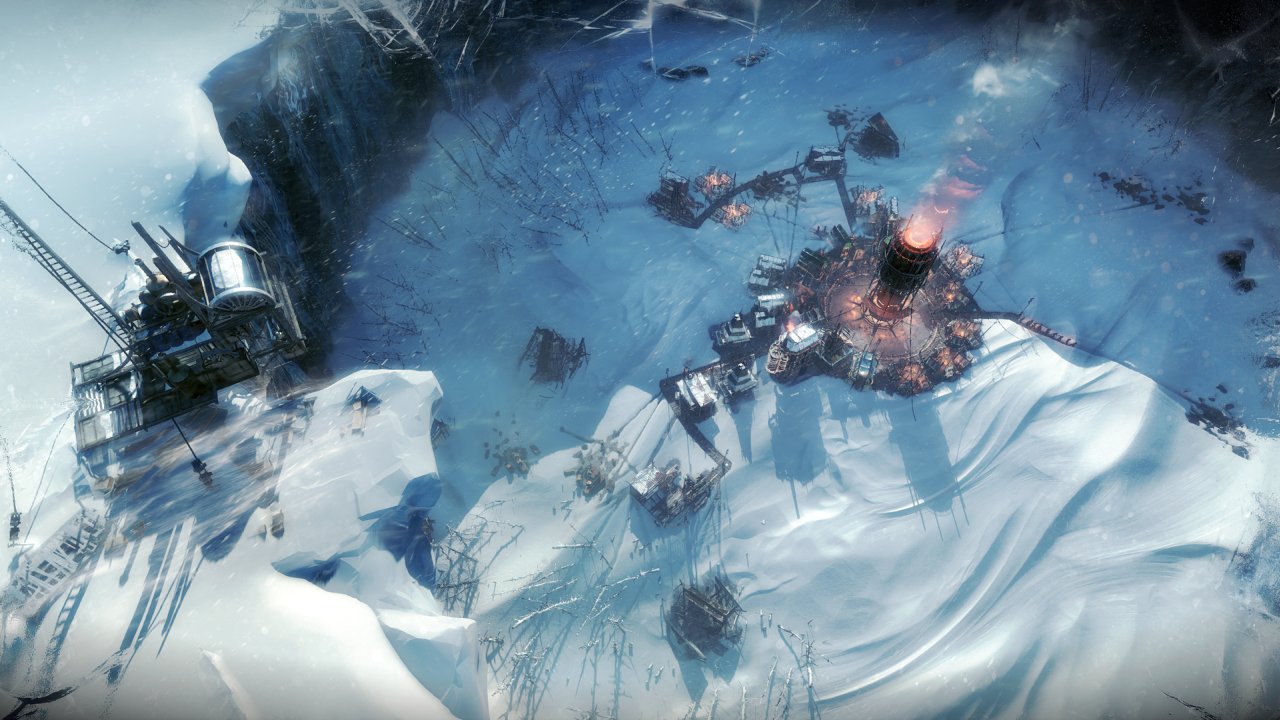 We, as players, will take the reins of the mayor or ruler of the last known city on Earth built around what appears to be the last generator of its kind, near the North Pole. As the city’s leader, we will have to manage resources, investigate new technologies to improve the quality of life of the inhabitants, provide citizens with different needs, legislate and make complicated moral decisions that will make the game have a unique attraction that, just like the previously developed This War of Mine.

A generator that beats like a heart and gives life to those around it.

Our role as leaders of the settlement will begin with just a generator occupying the center of a totally frozen little circle and a paltry warehouse to store a few supplies. With these few tools, we will have to start collecting resources such as metal, wood, food or coal, the most important since it will allow us to turn on that central generator to supply heat to the buildings we are building around it. 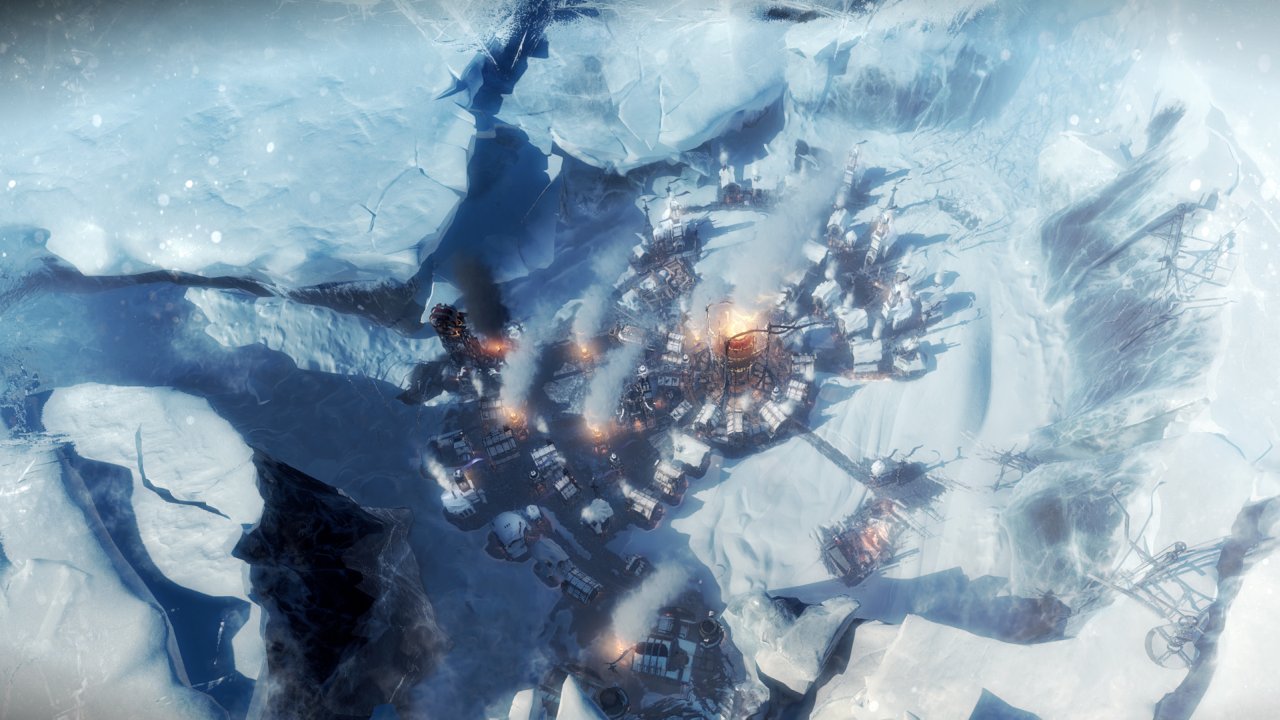 In fact, it will be essential to distribute well both the houses so that our population has a home, as well as the service buildings such as the infirmary, the nursery, or the kitchen since keeping them near a heat point to heat them, will be essential in each one of them. If a building does not have a nearby heat source when temperatures drop, shallow temperatures could reduce its production and, in some cases, such as the infirmary, we would be facing a completely useless building in which the citizens of our city will not be able to work.

Invest in technologies to survive day after day

As the days go by in the game, the weather will get harder and harder, even exceeding 70 degrees below zero and making life practically impossible for all the inhabitants of our city who, with these temperatures, will fall ill with ease. They could even die, depleting our population and, with it, also the essential labour force to obtain all the resources we need to survive. To combat these extreme temperatures, we will have to investigate new technologies that allow us to improve the generator, “raise its level” so that it can increase its power to give us more temperature or expand its range to be able to cover more surface and, therefore, maintain warmer more buildings. 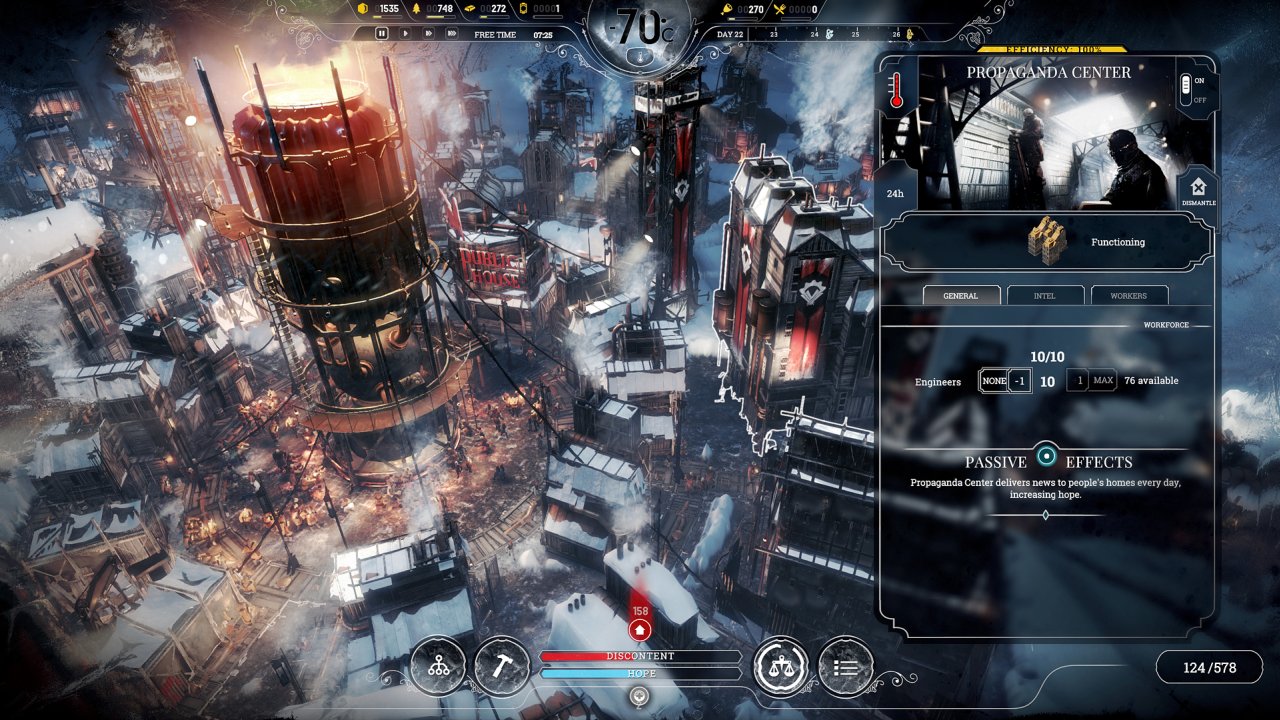 In addition to this research, which will be essential for our city to survive, from the technological tree that the game proposes, we will also have to investigate new buildings to effectively extract materials, improve the quality of homes or services to citizens. (with the infirmaries, for example) or increase our chances of finding a new population or resources through exploration.

Legislate, oppress the people, control them through faith and multiple decisions of moral significance

As we already told you at the beginning of this text, 11 bit has filled the game with moral charges with an aroma similar to This War of Mine. However, instead of being able to do whatever it takes to survive, we will have to be able to make any decision, no matter how unpleasant, to try to seek “a greater good,” so that the settlement, our new city, can survive and be the new capital of humanity. This will lead us, at times, to become authentic dictators, repressing our people, exploiting them with long working hours, beating protesters and those who disagree with our policies to try to keep the population together, avoid riots and that everyone keep working so they can have food, coal and, above all, heat. 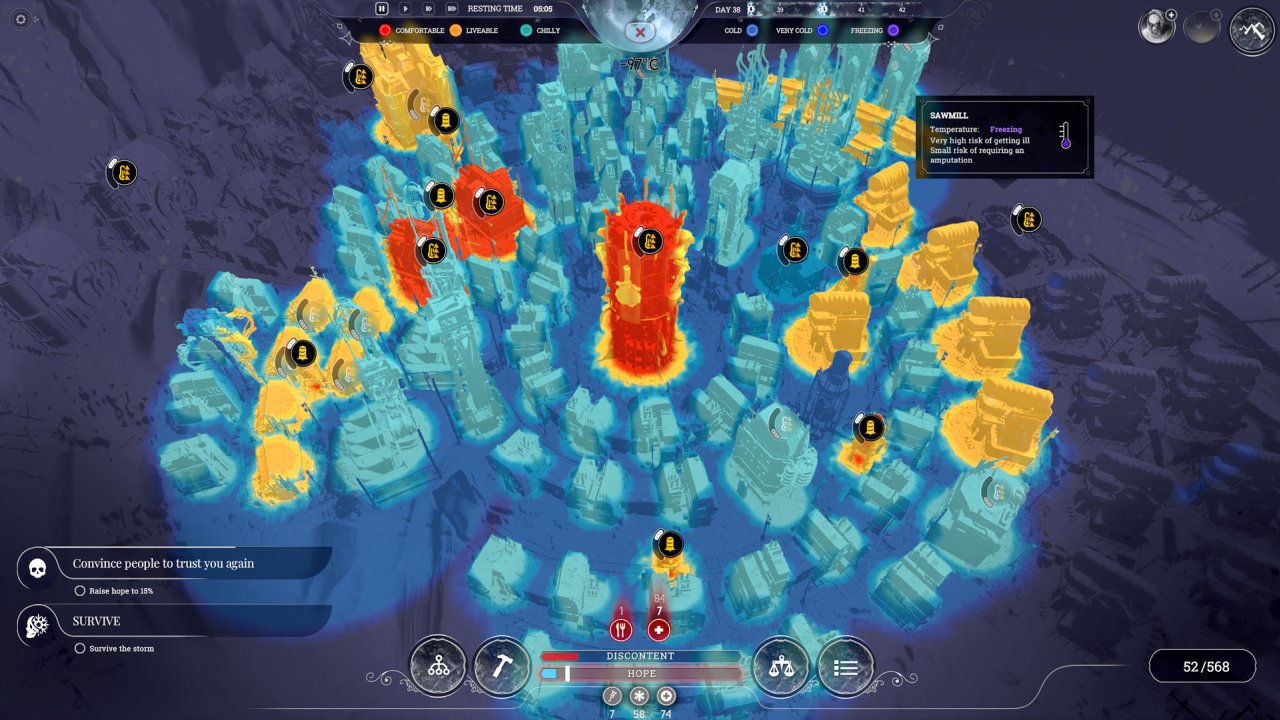 At the beginning of the game, we will have two parameters that will measure the “satisfaction” of the inhabitants of our city, which will be Discontent and Hope if we attend to the needs of our population, such as building more houses, hospitals, etc. Hope will rise while, if inhabitants die, it is too cold or many people fall ill, it will be discontent that will increase. From the end of the first shift, we must start creating new laws (one per day in-game time) that will allow us, in the beginning, to find new ways to combat hunger, disease or boredom, being able to increase working hours, legislate the struggles among the population to offer entertainment, an escape valve, or decide what to do with the disabled. 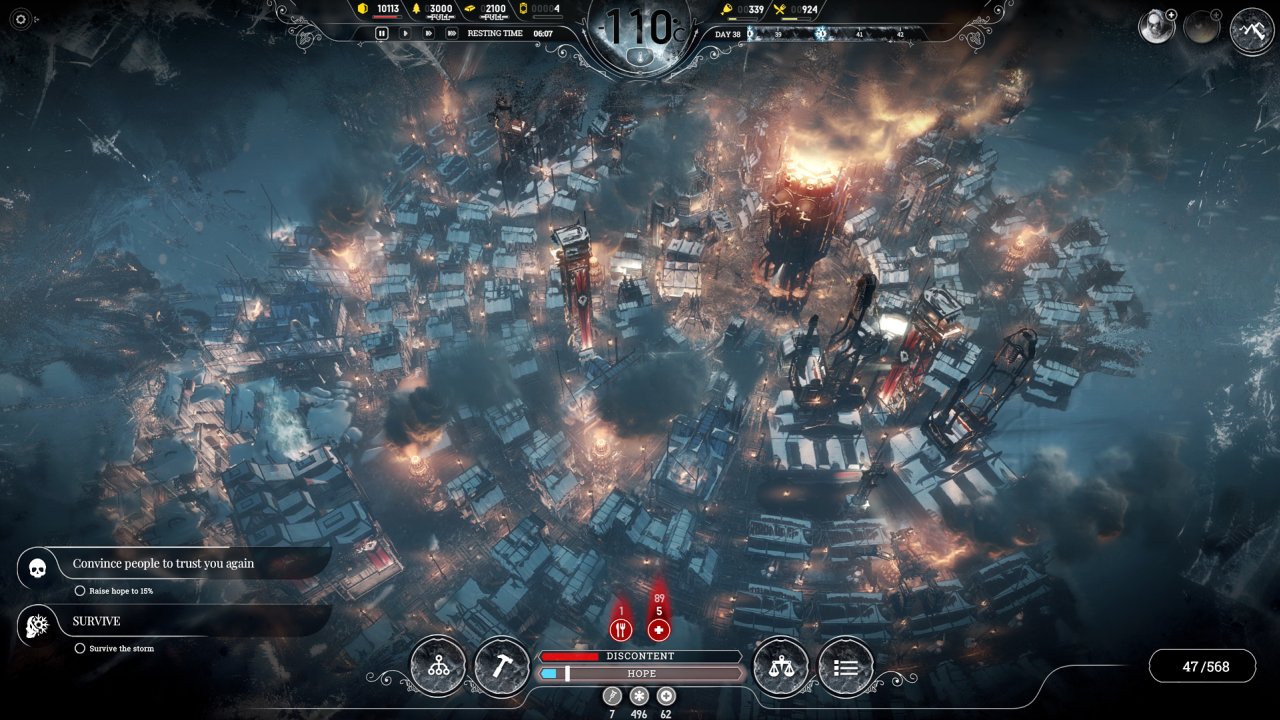 Later on, the Rule of Law will evolve to give citizenship a purpose, allowing us to choose at this time between two very different arcs that of faith controlling the population through a new religion, or that of devotion to ourselves, becoming a dictator who will establish neighbourhood vigilances, guard posts, prisons … until we create a New Order by changing the parameter of hope to Obedience, being the “Hitler” of Frostpunk.

Controlling the population, in one way or another, will be essential to guarantee the survival of the settlement, sometimes having to make decisions that will turn our stomachs (such as setting an example to the rest of the citizenry by executing a rebel or an audience) for the aforementioned “greater good” that will force us to have, at times, very few scruples.

There is life out there.

In addition to controlling everything that happens within our city, legislating, expanding our city and obtaining new resources, it will also be tremendously important to control what happens outside our ice walls.

We can investigate a series of explorers and collectors that will allow us to explore the surroundings of our city to find resources, other survivors, new technologies and even abandoned settlements that we can take advantage of for our benefit, using their mines through some collectors who will travel from continuously from point to point increasing our capacity to generate resources for the city. Exploring the entire map, deciding whether or not to bring a new population to our settlement (yes, more labour, but also more spending in the form of houses and food) and reusing the abandoned settlements for our benefit will be another key piece if we want to guarantee the success in our games.

A challenging difficulty that strategy lovers will love

The game mechanics are quite simple. However, it is difficult to master, especially in our first games where failure will be a constant before we adapt to the mechanics; once mastered, this skill could guarantee the survival of our city. It will be essential to know how to play well with the generator during the game, investigating its improvements in time to have that extra power that we will need to keep our city warm as the game progresses. 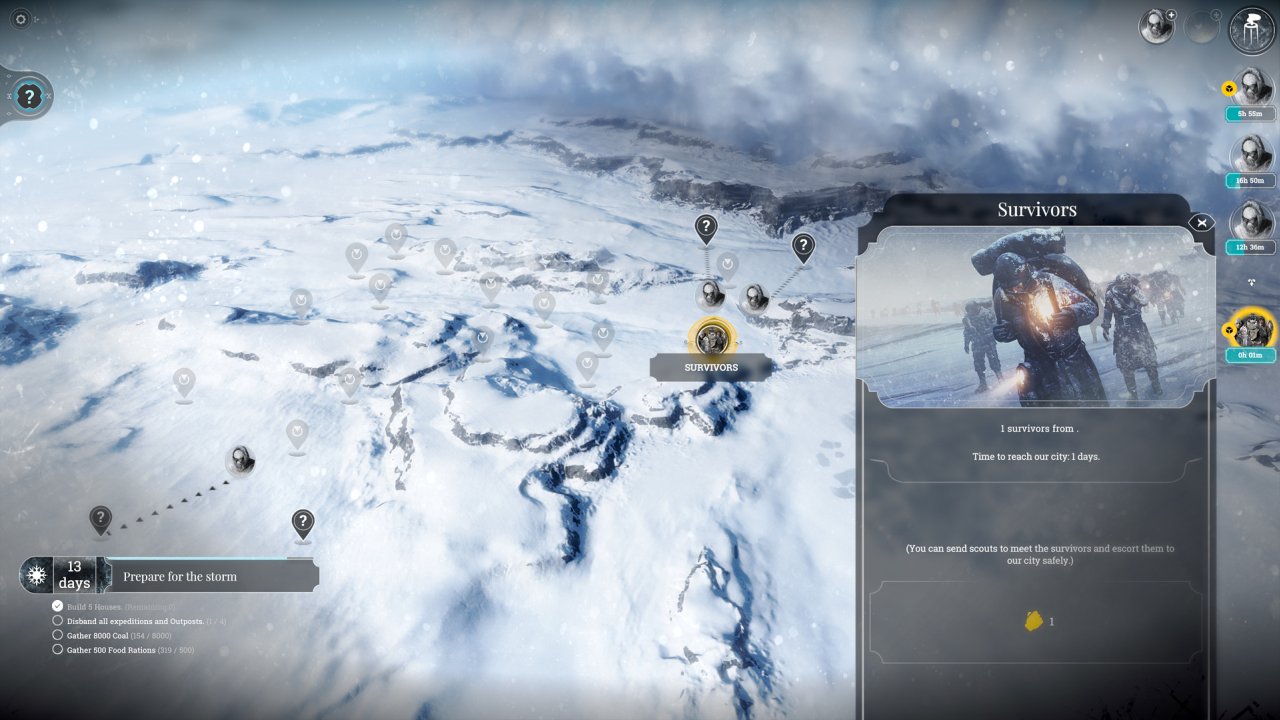 In addition, it will be important to know how to play with its different power levels, activating or deactivating them depending on the temperature that exists and controlling its scope to manage well the consumption of the coal that keeps it working and that, especially in the first stages of the game. , it won’t be easy to get.

But not only will we have to be with a thousand eyes with this generator, but we will also have to control, from time to time, the workers in each building (they can disappear temporarily due to illness or permanently due to death) as well as be aware of the needs of our population, of legislating and of having everything to survive. 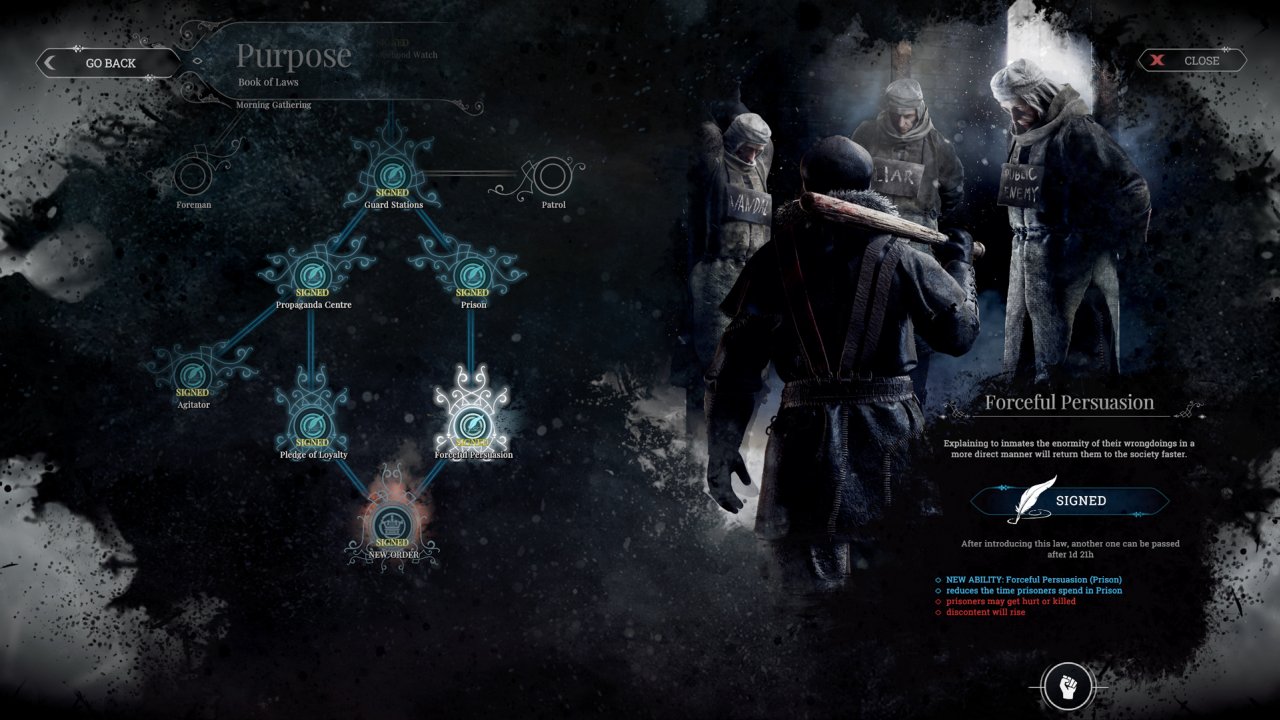 As we say, failing, making mistakes during the first games will be a constant, and we must learn from each of our failures, from each of our defeats, to survive for longer in the next game while we are aware of a thousand factors. When we finish controlling everything that happens in the game, distribute our city well, legislate in the best way to survive and optimize our resources, we will have a delightful feeling of satisfaction throughout the entire game.

Extra scenarios to increase the life of the game

In addition to the game’s main scenario, the title also offers us three alternative scenarios that, together with the main campaign, will offer us 20 or 30 hours of play. 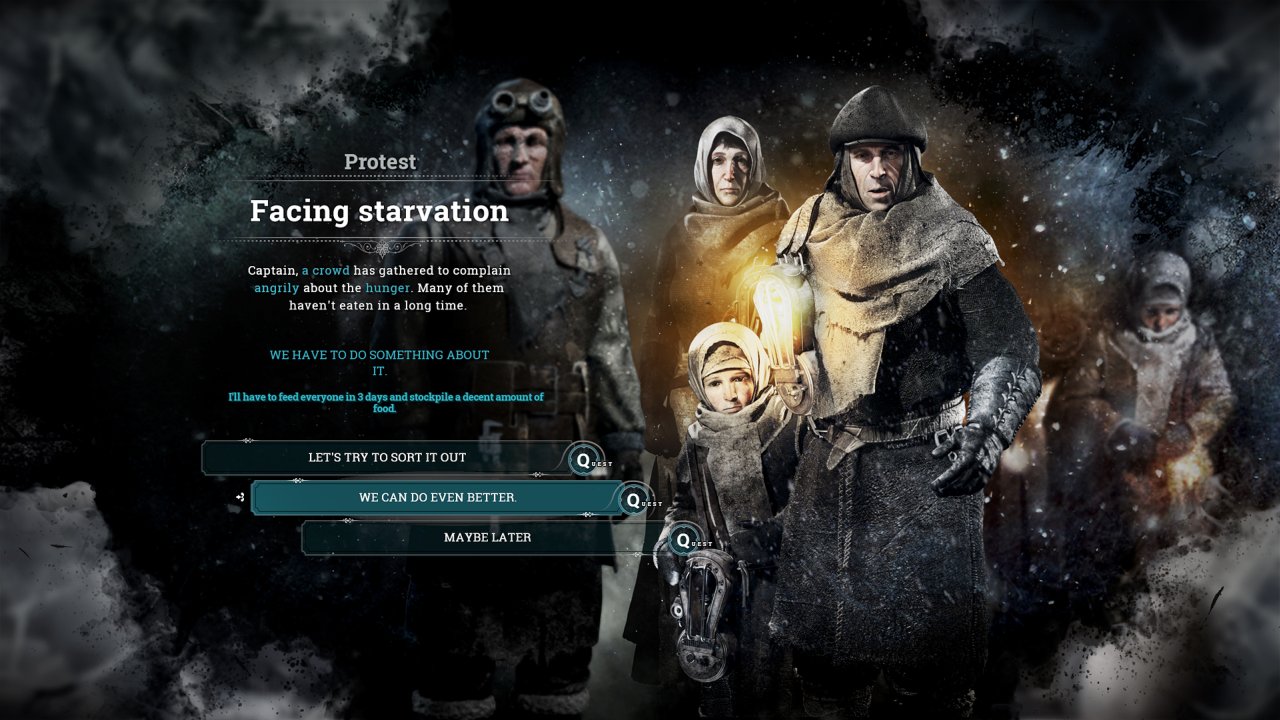 These scenarios have some unique mechanics and differ enough from the main campaign to attract all players. Of course, we will not be able to access them until we survive a minimum of 20 days on the main campaign.

11-bit studios once again bring us a title that, in addition to offering us a unique experience, challenges our mind and touches our heart, loading it with moral decisions that will sometimes turn our guts and leave us with a bitter, very bitter taste in our mouths.

Beyond the playable mechanics, simple to control but difficult to master that make the title have peaks in difficulty that will delight strategy lovers; what catches FrostPunk is, as it happened in This War of Mine, its bitter vision of the universe, being the opposite of a story. There are no happy endings here, no heroes or heroines, just doing what is needed to survive another day. 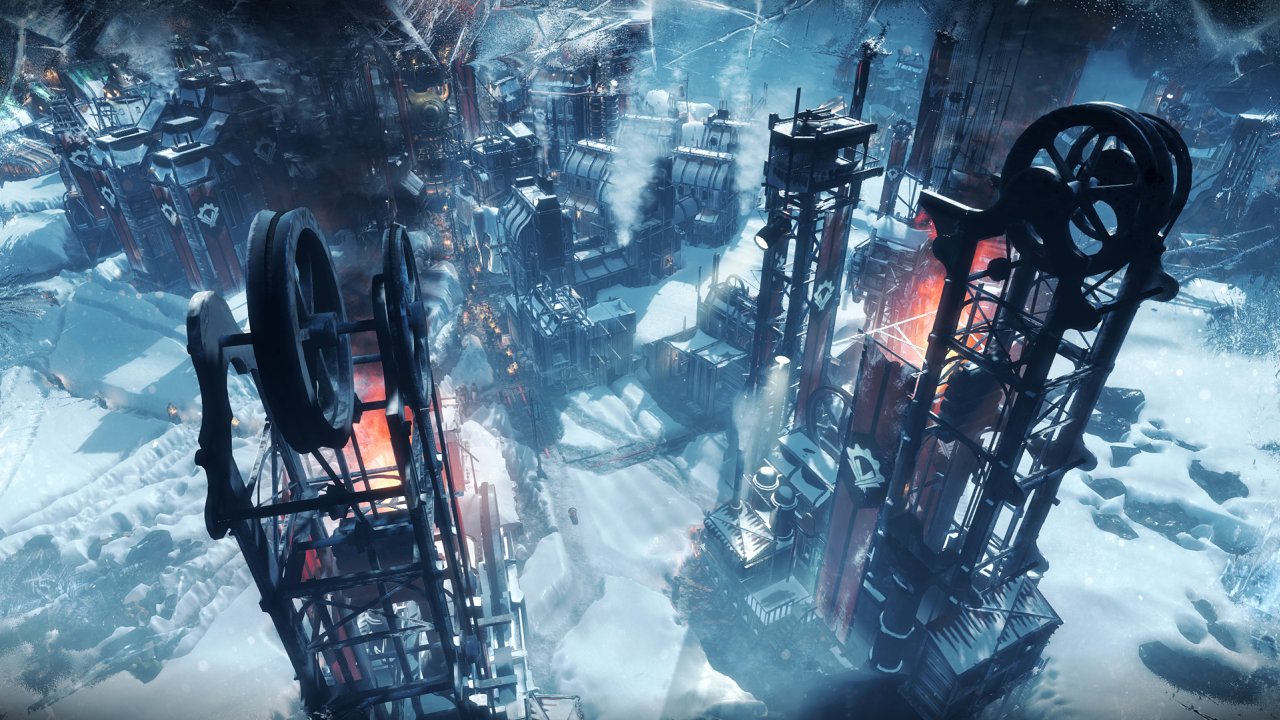 Here we are only us, the players, and our population, which sometimes we will have to exploit, punish, repress, deceive and even be forced to do real atrocities so that the generator that gives life to the last city of humanity continues to work so that the human race still has a brief halo of hope.

We prepare this review by playing the game on a PS4 Pro with a digital review copy provided by Evolve PR.

The Last of Us 2: Sony claims to have identified those responsible for the leak
April 30, 2020