Since its launch in February 2009, in commemoration of the franchise’s 15th anniversary, KOF 2002 UM has been well received by the community. Proof of this was the inclusion of the game in the magazine Arcadia Tougeki – Super Battle Opera 2010 tournament. During this competition – which Oz won – judges used a version of KOF 2002 UM with balance adjustments and bug fixes. This version was released on June 24, 2010, for PlayStation 2 under The King of Fighters 2002 Unlimited Match Tougeki Ver. 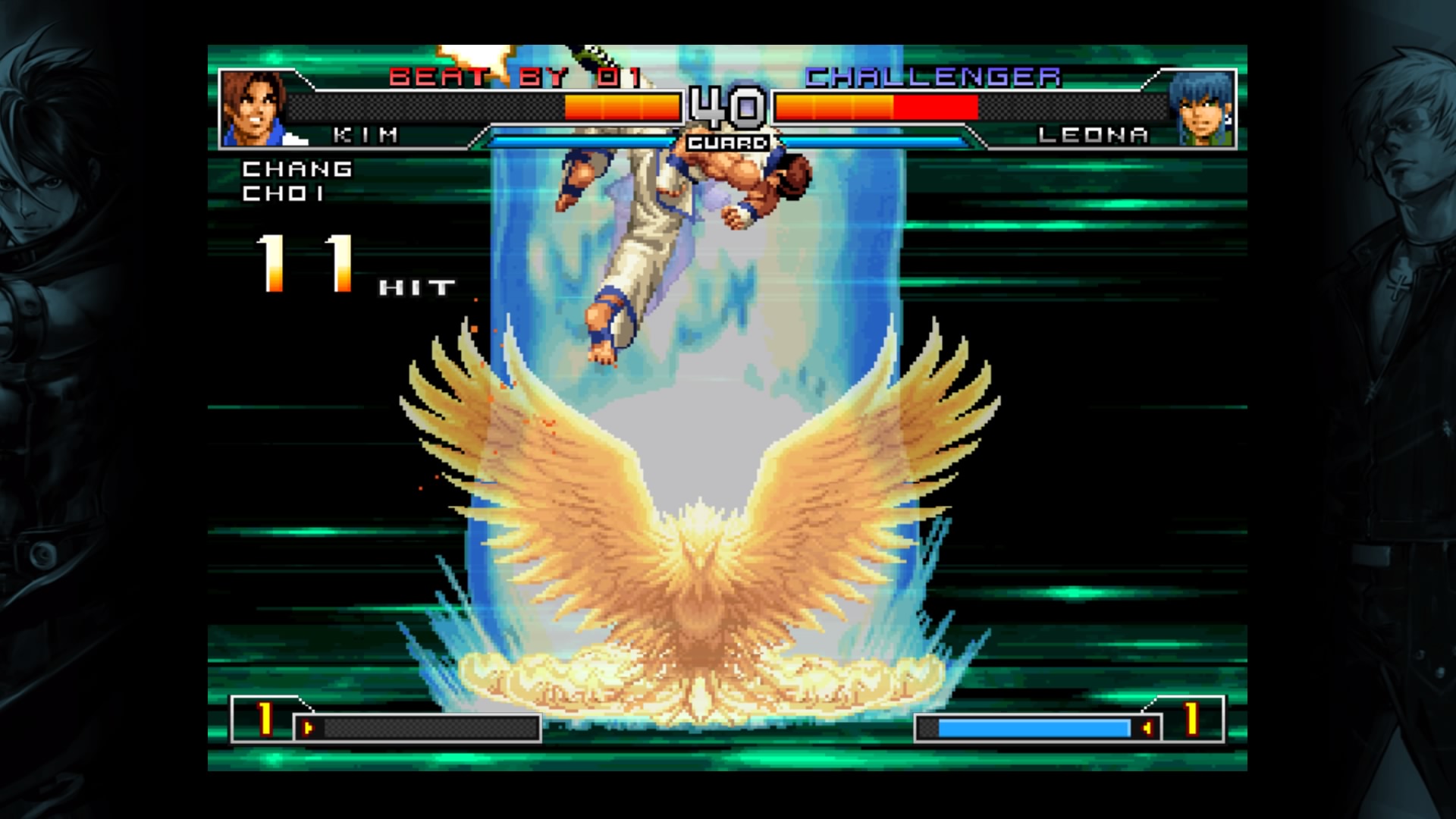 Like KOF 98 UM, The King of Fighters 2002 Unlimited Match brings together all the characters from past story arcs in KOF history. For this reason, this game, like its original version, does not have a canonical story. In this title, we can see characters that have died in installments before KOF 2002. Thanks to this, KOF 2002 UM has a total of 66 players available to select from. Among these characters, we highlight the inclusion of alternate versions of Robert Garcia, Sie Kensou, Takuma, Geese, and all the «New Face Team.» To access these variants, players must press the “options” button on the character.

The gameplay is what makes The King of Fighters 2002 Unlimited Match great. We should note that this is the last game in the franchise not to have any difficulty reduction in the movements’ execution to “expand the audience of the game. For this reason, players should be aware that the KOF 2002 UM learning curve is slow, difficult, but highly satisfying. Each character, despite the peculiarities and differences in their movements, has the same tools. Among these, we highlight the four types of the jump, the special high damage movements (DM, SDM and HSDM), movements with ‘counter wire’ properties and the ‘Max Mode. 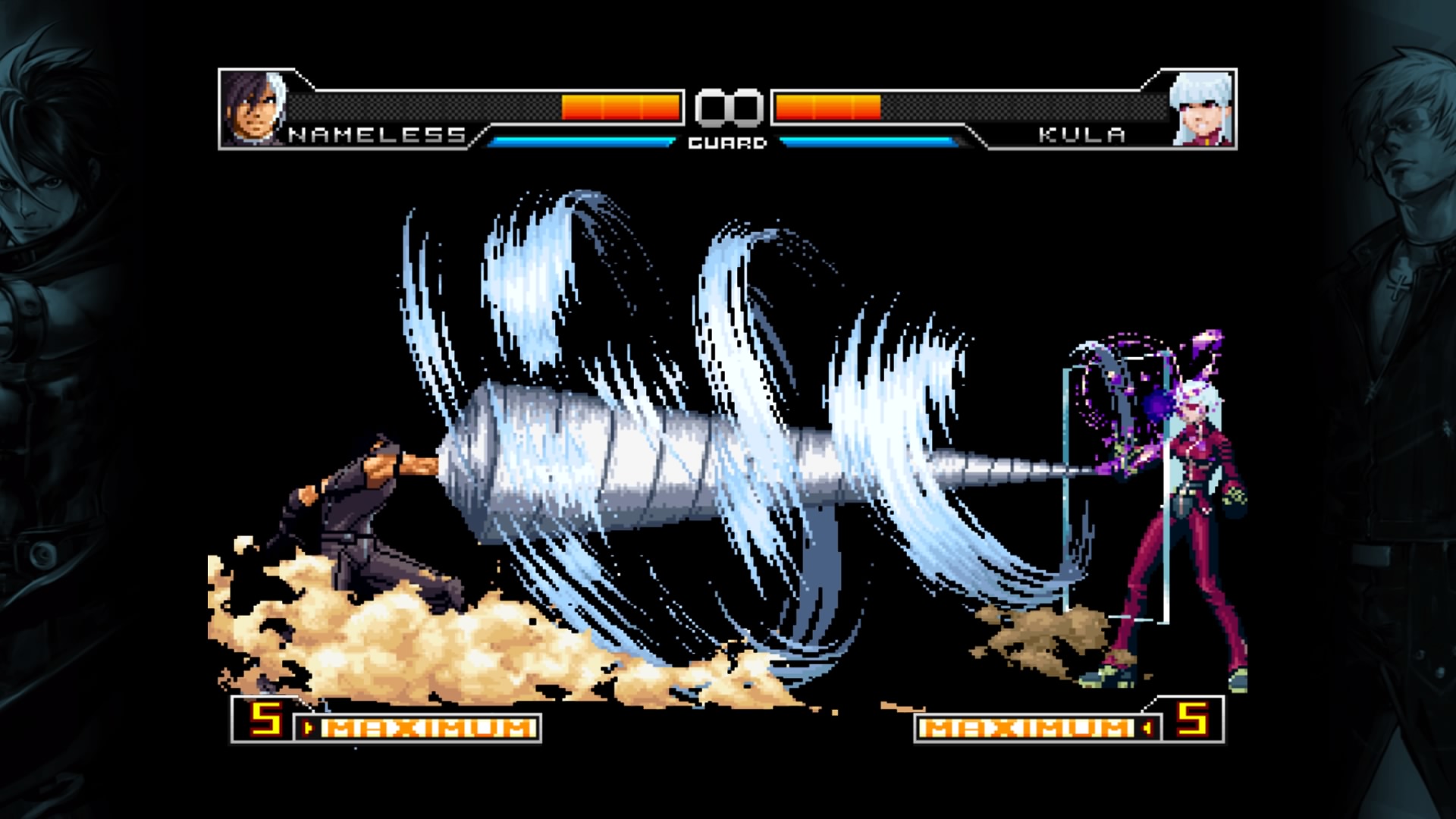 The ‘Max Mode’ is activated by pressing ‘B’ (weak kick) + ‘C’ (strong punch) simultaneously. There are two ways to activate the ‘Max Mode.’ The first is by spending a point on the specials bar in a neutral position. The other is cancelling a normal hit to continue the combo and optimize the damage. Mastering this cancellation is essential to get the most out of each of the characters in the title.

The highlight of the PlayStation 4 version of The King of Fighters 2002 Unlimited Match is the online play. This thanks to the ‘netcode’ known as ‘rollback’ implemented by Code Mystics, which allows a more stable connection between players. In this way, the experience of playing with people from other countries – especially some from our region – is more satisfactory. This is evident in the little wait we have to endure when looking for a rival and in the communities that have emerged since the launch of the ‘rollback’ for the Steam version of this same title. Without a doubt, for a fan of fighting games, this is the most important thing. 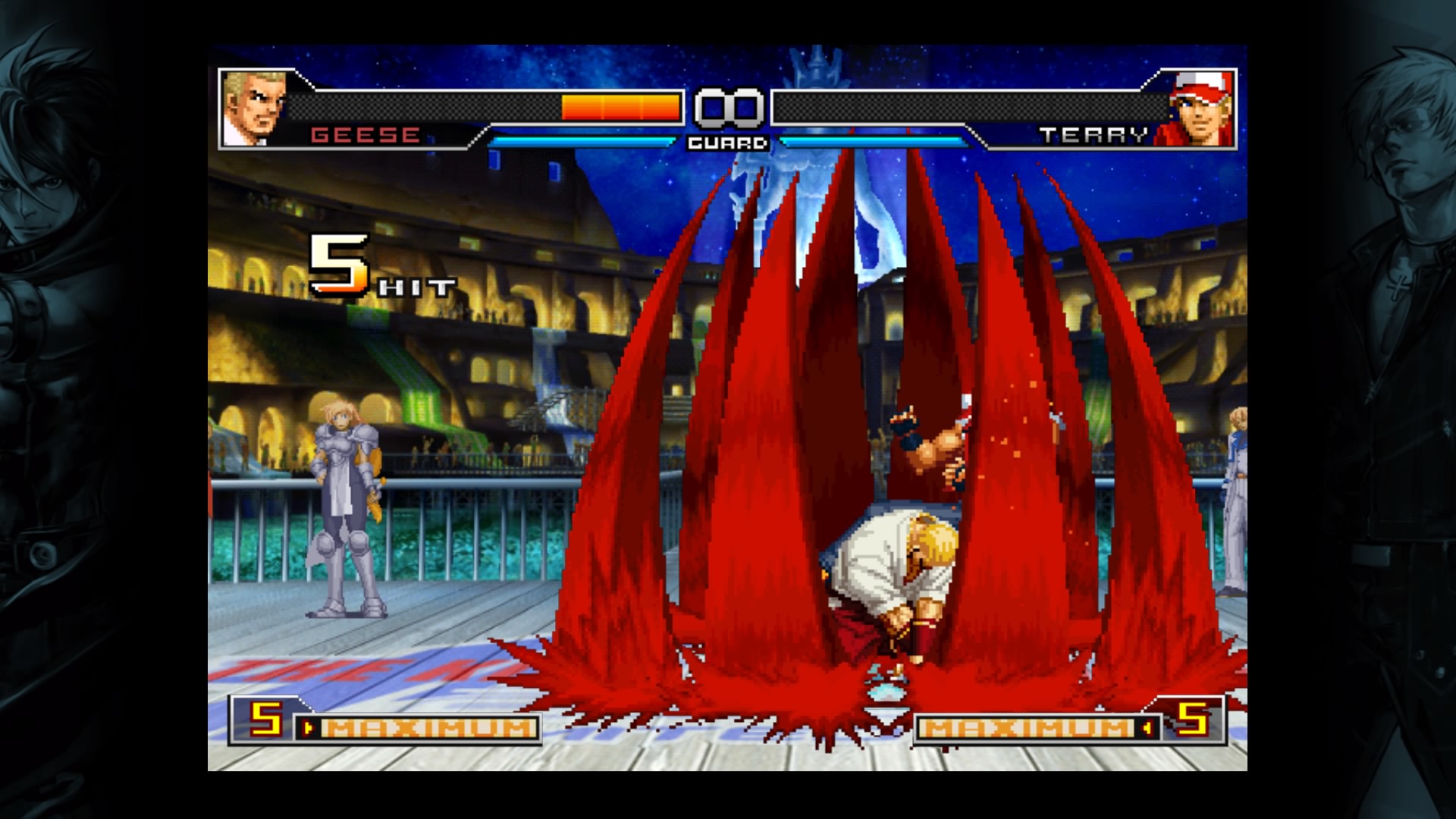 As for the game’s art, SNK commissioned illustrator Hiroaki Hashimoto to do all the game’s victory images and promotional arts for the game. This illustrator is well known to fans of fighting games, as Hiroaki has also participated in such games as Soul Calibur VI, Buriki One, and Street Fighter IV. The scenarios, which are based on the arcade, are not in 3D as in PlayStation 2. However, they are full of details and have multiple characters from other franchises of the Osaka developer. 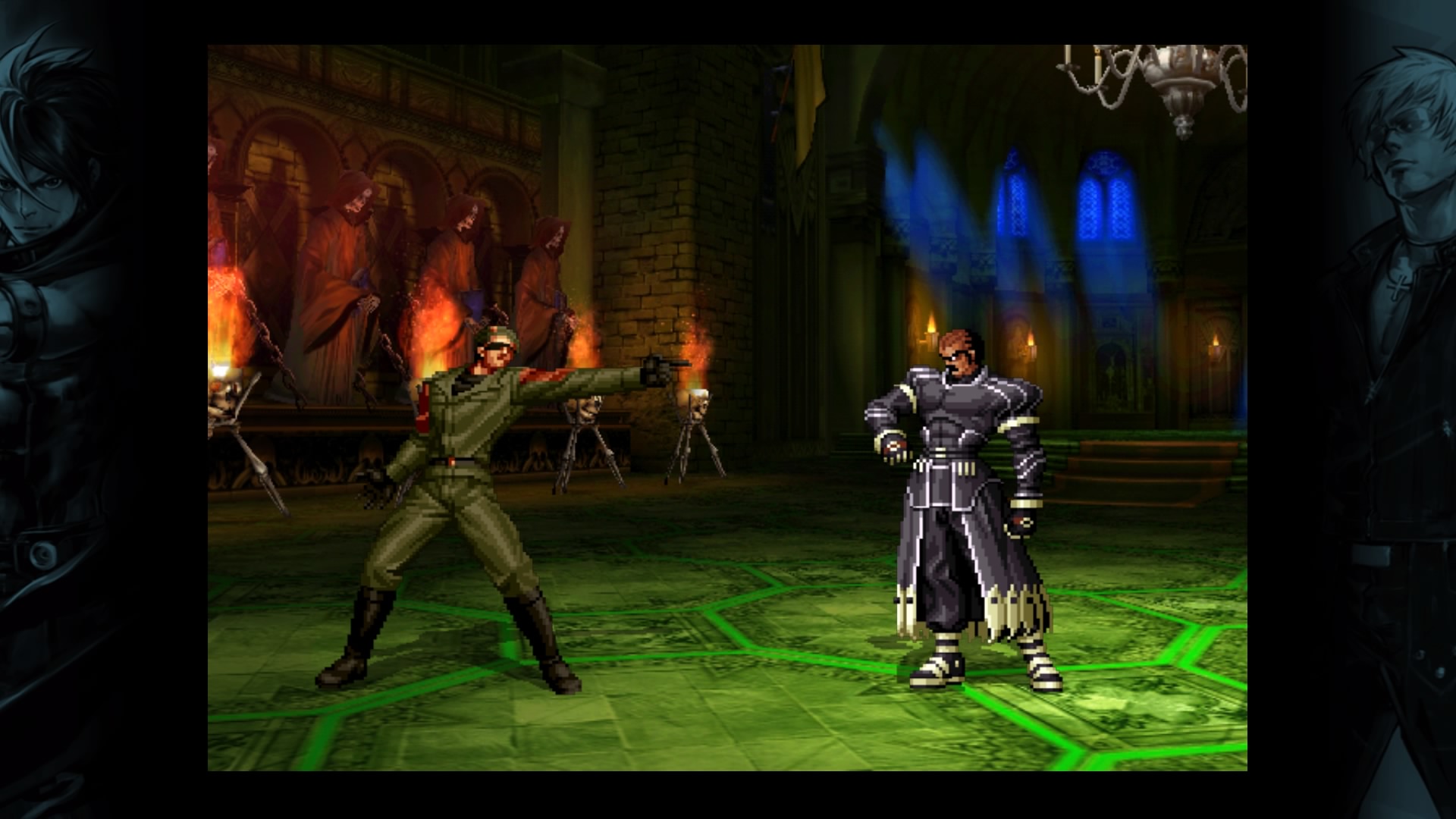 If the illustrations in KOF 2002 UM ooze quality, the music is not far behind. For this game, SNK made the soundtrack from scratch by Yasufumi Fukuda ( Monster Hunter ), Makoto Asai ( Lunar: Silver Star Story ), Teruo Konishi ( Mega Man X 1-8: The Collection ) and Two-Five. Some of the most representative melodies of this game are ‘ Mutually Exclusive Dichotomy, ‘the main theme of Nameless and ‘ Butterfly Emerges from Chrysalis, ‘the main theme of the “New Face Team.” 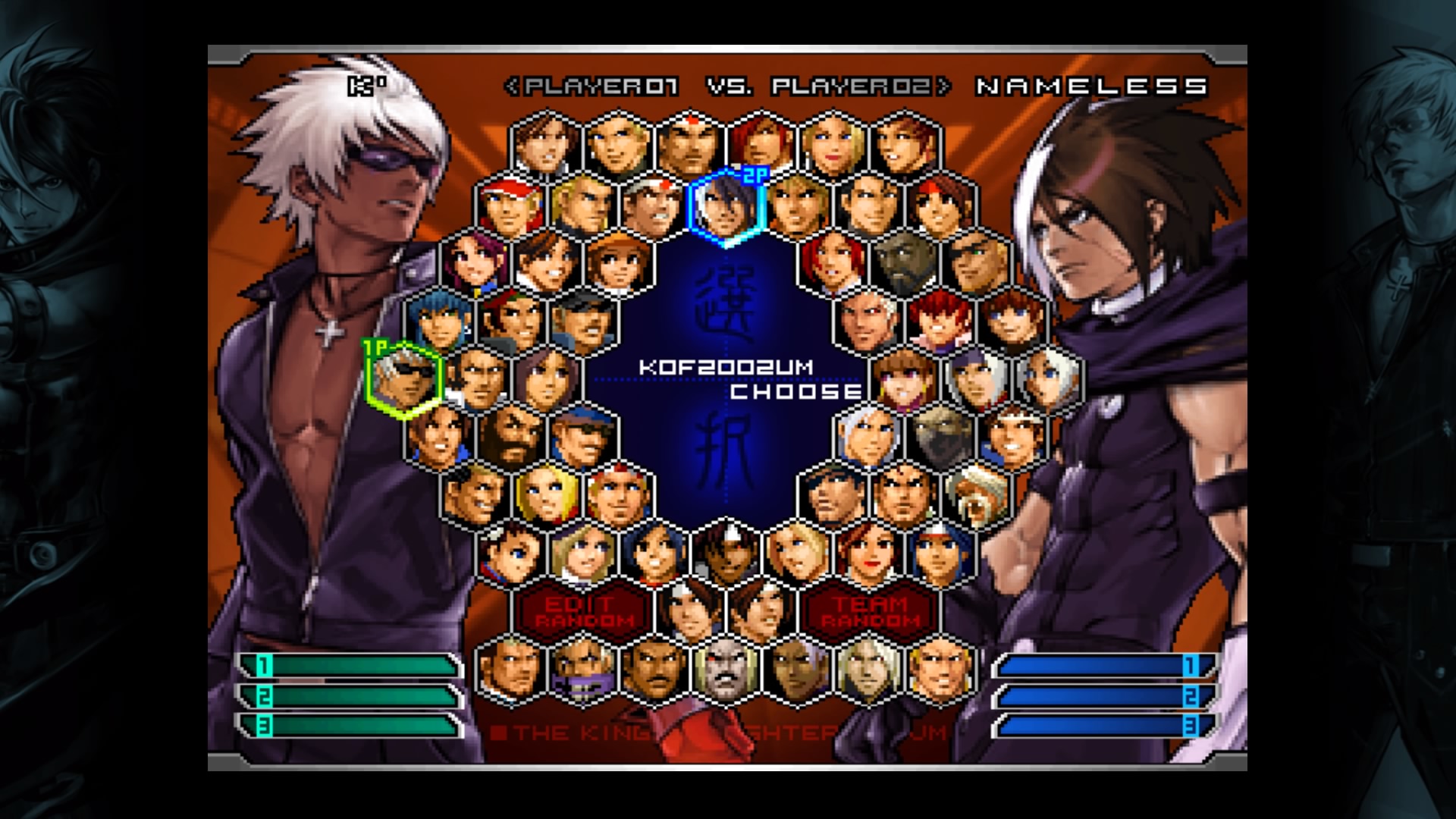 The King of Fighters 2002 Unlimited Match is a great fighting game. This is reflected in their extensive catalogue of characters, how polished their illustrations are, the excellent combat system and the musical arrangements. Additionally, with the inclusion of ‘rollback,’ the gaming community is more active than ever. However, not having the original version – as if it has KOF 98 UM – added to the lack of extra content, which we have seen in previous SNK releases by Code Mystics, leaves us a bad feeling. Fortunately, the price of the game is fair. So there is no excuse for not entering the competition and reliving the old days in the arcade rooms.
We prepared this review with a digital review key for the PS4 version of the game provided by SNK
8.5