Remedy invites us to manipulate time in a very spectacular and a cinematic adventure! Quantum Break is here...

Remedy, the creators of Max Payne and Alan Wake, announced Quantum Break in May 2013. Because of it exclusivity to Xbox One (also on Windows), it has generated enormous expectations, Quantum Break is a great game, but not a memorable one as many expected. Quantum Break looks more like an action adventure game with a very complicated story, and it is a cinematic game with a few shootings, it is more focused to the narrative than action.

An interesting science fiction story with time travel, mega – corporations with dark interests, and nothing too original or surprising, although it is well above the average of what we are used to in most video games. The problem is, the adventure sections have serious rhythm problems, due to the high amount of narrative, and the experience feels somewhat wasted. When we talk about the story, it is not only dialogue or cutscenes but especially the huge number of readable content such as emails and all kinds of texts that are placed in the game. Some can take minutes of reading given its length, and in some cases reveal vital details about the plot and characters, so if you want to immerse in the narrative, reading is essential. These slow the pace of the game down immensely.

When Quantum Break gets into action, it offers very spectacular and entertaining scenes, which may remind you the legendary Max Payne, being able to manipulate time in different ways and experiment these trick on enemies and stage is fun. The problem is that these action phases sometimes feels short breaks between narratives, and only the start of the adventure offers a good balance between these two sides, with a final act that has more action than the rest of the game together. The story of Quantum Break is well written and maintained to the smallest detail. We control Jack Joyce, who is involved in an accident in a lab testing of a time machine and receives some extraordinary powers, he has to solve the mess. Otherwise, it will be the end of the world.

Story develop while controlling the character through dialogues, some cinematics and a lot of reads that are distributed in the stage, the story unfolds relentlessly. The game is divided into five acts. Before each episode you have to make a decision, choosing between two options, called Impact knot. Before you make a decision, the game lets us see the outcomes of either decision and thus act accordingly, this decision changes the chapter, although not entirely, just some details or explicit scenes. Based on your decision you control Jack or the antagonist. 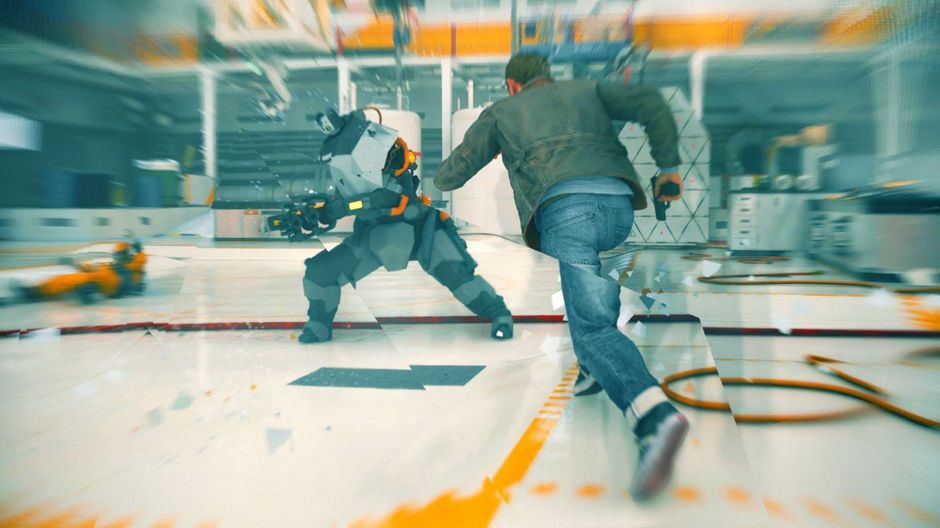 The consequences of our decisions are also reflected in the game, but anecdotally, for example by changing some of the documents found on stage, or precise details of the environment. So really the replay value is relative, and there are not enough reasons to play this adventure several times. At any time you can repeat an act or Impact knot and see what would have happened if you pick the other choice,  ou will find that things do not change much, and the core of the story remains practically same. Because of this, we are presented with a relatively short game, which takes about 8 hours to complete and including 80 minutes of the live acted video, and no new modes will be unlocked once you’ve finished.